The story of Cypriots in Australia

The first concise study on Cypriot migration and settlement

The Cypriot Community of Melbourne and Victoria decided to monitor, investigate, document, analyse and preserve the recorded history of its own history as well as the history of Cypriots in Australia. During the last twelve months this assignment was given to Dr Anastasios Tamis and his team of researchers, who are exploring Cypriot settlements and the Cypriot presence across Australia. An illustrated historical account of this settlement and presence is expected to appear as a large volume by 2022, celebrating the 90th Anniversary of the genesis of the Cyprian Community of Melbourne and Victoria (1932-2022).

The 700-page book will include information concerning the exodus from Cyprus, immigration to Australia, the initial settlements, the community organisations in all States and Territories, the economic, social and cultural evolution, the relations of Cypriots with other ethnicities, the evolution of the national issue and the genesis of collective entities. The book’s main story is the history of the Cyprian Community of Melbourne and Victoria, which will cover the bulk of its narration.

More than 70,000 Cypriots exited their island to make Australia their home – numerically the second largest after the UK. Scattered throughout the vast hinterland and the main urban centres, they built their own community organisations, established their socio-economic networks, maintained their cultural and ethnic identity, respected their heritage and transmitted to their offspring mechanisms to enable them to preserve their identity. From the last quarter of the 19th century to 2021, thousands of Cypriots settled in rural areas, acquired their own sugarcane farms, their banana plantations, worked in the coal mines of Bambra and Latrobe Valley, and established their own cafes across the country villages and townships. By the late 1920s they managed to elect their own leaders, to vote the inaugural committees, to establish their own community organisations.

In remote Home Hill, inspiring community leaders built their own Orthodox Church, founded their solidarity organizations, and enter relations of amity with the local Australians. During the closing years of the 19th century, they settled in the major urban cities of Brisbane, Sydney, Newcastle, Melbourne, Adelaide, Darwin and Perth, where they remembered their ancestors and honouring their memory offered their names to the new organisations and their institutions- Evagoras, Zenon, Cyprus, Aphrodite.

READ MORE: A new multi-storey building to house the Cypriot community of Melbourne

Political events and their concomitants defined the volume, pace, and frequency of settlement, commencing from the start of the colonial era, the years following 1931, the struggle for liberation in the 1955s, the dreadful inter-communal conflict, the 1st Turkish invasion in 1964, the catastrophic Greek junta coup, the 2nd and 3rd Turkish invasions (July and August 1974), the refugee crises, the difficult years of the economic crisis (2009-2018).

A small portion from the introduction of the book is presented below:

Cyprus had been a source of constant repatriation and successive settlements in the Diaspora during the British colonial era (1878-1960), as well as during the post- Independence years, a period, which was also marked, with decisive socio-economic achievements but also severe and hostile inter-community and inter-religious relations between the Cypriots of Greek and Turkish ethnic origin. The bilateral Greco-Turkish political relations also bore a menacing aspect. This bitter struggle had its origins in the desire of both countries to claim, at any time during the last one hundred years, the sovereignty of the island. The Turks of the metropolis with their scattered interests demanded, arguably, more power and greater influence for their brothers in Cyprus; much more than the Turkish-Cypriot minority had been constitutionally had been entitled to receive, being a minority of an 18% of the total population. Greece, on the other hand had displayed rather maximalist tendencies wishing to control or even to subordinate the minority. Hence, disastrous prevailing fundamentalist and nationalistic attitudes began to accelerate during the early years of independence by the leadership of the two communities. In 1960, following the elevation into power of militant nationalist General Cemal Gürsel (1895-1966), disastrous animosity ensued, which led to tortuous military and diplomatic conflict between the Turkish military regime and the Government of Archbishop Makarios, which had its peak in August 1964, when the Turks bombarded Cyprus. Thereafter disaster dogged Cyprus: especially when the colonels of the Greek Junta challenged its political and military ascendancy with their ruinous coupe, giving the Turks the long-desired pretence to invade the island in favour of their minority (15 July 1974).

The Turkish invasion, which was implemented in two stages (July and August), despite calls by the UN Security Council [Resolution 353 (1974)] and the quick restoration of constitutional order on the island, had dreadful ramifications. Turkey occupied 36.2 percent of the sovereign territory of the Republic and forcibly expelled about 180,000 Greek Cypriots from their homes. Another 20,000 Greek Cypriots, who remained in the occupied areas, were also forced to eventually abandon their homes, and seek refuge in the safety of the government-controlled areas. In addition to the economic devastation caused by the invasion and the forcible population movement, over 3000 persons were killed, while some 1400 Greek Cypriots are still missing, arguably executed, after they had been moved into Turkey’s Anatolia. Turkey’s occupation brought economic ruin to the part of the island which prior to 1974 was the richest and most well developed. Poor economic conditions resulting from Turkey’s systematic colonisation of the occupied areas by illegal settlers forced Turkish Cypriots to emigrate to Europe and elsewhere. The Anatolian settlers currently outnumber the indigenous Turkish Cypriots by about two to one. Independent observers have documented this issue for the Parliamentary Assembly of the Council of Europe in 1992 and again in 2003. Finally, there are still over 43,000 heavily armed troops from Turkey in the occupied areas. It should be noted that beginning with Security Council Resolution 353 of 20 July 1974, the UN has called for “an immediate end to foreign military intervention in the Republic of Cyprus,” and for “the withdrawal without delay from the Republic of Cyprus of foreign military personnel present otherwise than under the authority of international agreements.”

READ MORE: The Greeks of Australia who are going back home

Turkey-born American journalist and political analyst Uzay Bulut, focusing mainly on Turkey’s ethnic and religious minorities, political Islam, and the history of Turkey, had been one of the foremost propagators of peaceful coexistence amongst minority groups. Bulut, a Distinguished Senior Fellow at Gatestone Institute-International Policy Council, based in Washington D.C. embarked on a fierce campaign accusing successive regimes of Turkey of persecution and distraction of Christian minorities in her country of birth; looting of Christian heritage and misappropriation of Christian culture and churches in the occupied Northern Cyprus. In her writings Bulut, an expert on the modern history of Turkey, wrote: “But the most destructive blow to Greek and other Anatolian Christians was the 10-year genocide that took place before, during, and after World War I. This crime was part of the mass annihilation that exterminated around three million Armenians, Assyrians, and Greeks in Asia Minor between 1914 and 1923. The International Association of Genocide Scholars (IAGS) has recognized the Ottoman campaign against Christian minorities during that period as genocide…” Bulut was a most noteworthy critic of Turkish atrocities committed against the Cypriots, but also of the destruction of their historic, cultural and religious monuments. According to this Turkish historian more than 550 Greek Orthodox churches, chapels and monasteries located in towns and villages of the occupied areas, had been pillaged, deliberately vandalized and, in some cases, demolished. Many Christian places of worship had been converted into mosques, depots of the Turkish army, stockyards, and hay barns. Her appraisal is self-manifesting:

According to some estimates, through illegal excavations in the northern part of Cyprus, more than 60,000 Cypriot artefacts have been stolen and exported abroad to be sold in auction houses or by art dealers… A sixth-century mosaic of Saint Mark, stolen from a church after Turkey’s military invaded Cyprus in 1974, was recently recovered in a Monaco apartment and returned to Cypriot officials. The ancient masterpiece was described by Arthur Brand, the Dutch investigator who located it, as “one of the last and most beautiful examples of art from the early Byzantine era.” Many other cultural Cypriot relics, from churches and other sites, were stolen from Cyprus by Turkish invaders and smuggled abroad. Some were recovered and returned in the past. In 1989, mosaics stolen from the Church of Panagia Kanakaria, discovered in the United States, were returned to Cyprus.

Unfortunately, the Turkish political system, confident in their military might and superiority maintained their oppressed ascendancy in the island, ignoring all international directives. Meanwhile, the Cypriots residing within the sovereignty of the Republic, after 1980, responded vigorously to the mighty social, political and economic changes that came with the robust development of foreign investments, maritime activities and tourism. Under the might stimulus of such external forces and the logic of internal contingencies, these Greek Cypriot communities grew rapidly to prosperity. 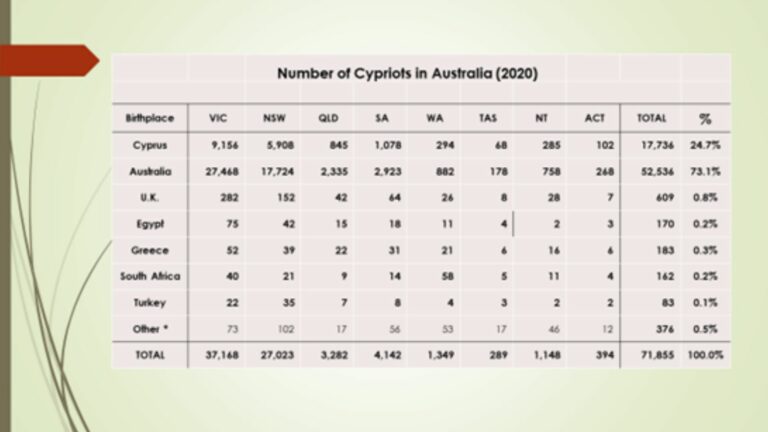 International links between Australia and Cyprus were characterised by a common British institutional inheritance, membership of the Commonwealth and Australia’s long-standing support of UN efforts to find a just and permanent solution to the territorial dispute in Cyprus. The Australian Government urged all parties to continue ongoing constructive efforts aimed at resolving the Cyprus dispute. Furthermore, Australian police officers had served continuously as part of the UN Peace Keeping Force in Cyprus (UNFICYP) since 1964, making a valuable contribution to the maintenance of peace and stability on the island. In 2015, the Australian Government extended the deployment of the contingent for a further two years until 2017. In 2014, the Australian Government also celebrated the fiftieth anniversary of the UNFICYP to which 15 Australian police officers are currently deployed annually see below). To mark the occasion of the fiftieth anniversary of Australia’s continuous contribution to the civilian policing component of UNFICYP, Cyprian President N. Anastasiades wrote to Prime Minister Abbott in April 2014 to thank Australia for its contribution and pay tribute to those who served.

The wheel of fortunes was to have one more turn in favour of the Cypriots when they became member of the European Union (1 May 2004), a membership that brought both wealth as well as allied political power. A new age dawned. Cyprus entered more cohesive trade and manufacture practices, and shifted from agricultural ways to a more merchantile, seafaring and development state. Economically, Cyprus now was governed exclusively by the Greek Cypriots, had become a wealthy state and was an object of envy to other competitive administrations. Her economy received a new impetus, following the dark years of economic crisis (2009-2016), when rich natural gas wells offshore were discovered, highlighting the island’s prospective role as an alternative source of energy to Europe, breaking the Russian monopoly in the region. This, naturally triggered Turkish widespread aggression in the eastern Mediterranean basin, to share the discoveries, supposedly for the sake of its minority in the occupied territory of the Republic.