Recently released in the original English and a Greek translation, Karen Martin’s novel, set in sun-kissed Crete exhausts the constructs of time, language and identity.

From the outset a conceptual tension is apparent between the English and the Greek versions of the novel which should be considered separate artworks in their own right, the Greek version being notable for the exceptionally high quality of its prose, rendered by Iosif Alygizakis.

In English, the title, “Dancing the Labyrinth,” is polyvalent. At first reading, it alludes to empowerment, in that one has sufficient mastery over whatever maze they find themselves in that they can actively “dance” it, that is, either dance through it, indicating that traversing it is easy, or making the Labyrinth itself dance. Either way, here, it is the Labyrinth that is the passive party.

The Greek title on the other hand, conveys altogether different connotations. «Στον Χορό του Λαβυρίνθου» (In the Dance of the Labyrinth) suggests that the active party is the Labyrinth. It is the maze that determines the dance, while the passive parties, those that dance a dance dictated to them by the Labyrinth, are the protagonist and/or the readers.

In both versions of the novel therefore, we are given to understand that the Labyrinth, with all that it symbolises, is key to understanding the story as it unfolds, and the reader should have regard to the traditional Greek conception of a tale unwinding as it progresses, like Ariadne’s thread in the hands of a Theseus, on the way to confront the Minotaur.

We encounter a similar polyvalency in the English and Greek versions of the main character of the novel, Cressida. Attempting to deal with a violent past, after the demise of her parents, Cressida seeks solace and healing in Crete. Falling pregnant, she experiences conflicting emotions with regard to her impending motherhood, as she contemplates the distinct possibility that her offspring will inherit the violent genes of her father, a patriarchal original sin if ever there was one.

In the Greek tradition, there is only one Χρυσηίδα and she, too, is a victim of the patriarchy. As she appears in Homer’s “Iliad”, she does not even have a name. Instead, she is identified simply as Chryses’ daughter, an object. Taken prisoner by Achilles, she is appropriated by Agamemnon, who refuses to allow her to be ransomed, according to the mores of the time. As a result, Apollo sends a plague sweeping across the Greek armies, causing Agamemnon to return Chryseida to her father and appropriate another of Achilles’ slave girls. Significantly, according to the Trojan War Cycle, Chryses comes to the Greek camp to thank the Greeks for seeing that his daughter was fairly treated (never mind that she was raped), and in gratitude, returns her to her rapist. This mythological background, the treatment of the mythical Chryseida as a commodity, her betrayal by those who are tasked to protect her and the appropriation of her sexuality as a gift offering among men, is vital in comprehending the psychological trauma experienced by Karen Martin’s modern incarnation of same name in the Greek version of the novel.

In the original English version however, Cressida carries with her the weight of a western cultural history that exists outside the Greek discourse. For in the West, Cressida, as reshaped by Boccaccio in his “Il Filostrato”, Geoffrey Chaucer’s “Troilus and Criseyde”, and best known through Shakespeare’s play, “Troilus and Cressida”, is a symbol of inconstancy and the archetype of the faithless lover. Falling in love with Troilus, one of King Priam’s sons, she abandons him when taken hostage by the Greeks and falls in love with Diomedes instead. In this literary tradition, Cressida is not a human being, she is a motif. As soon as she has betrayed Troilus, she has fulfilled her purpose and the men who have written about her do not mention her again, save for Chaucer who grants his Criseyde insight as to how she will be portrayed in literature: “Alas, of me until the world’s end shall be wrote no good song.” Here the right of any woman to choose who she will love or stop loving is considered not at all. In Scottish poet Robert Henryson’s version: ‘The Testament of Cresseide”, she is depicted as repentant after having contracted leprosy and been abandoned by Diomedes. These literary tropes, of a patriarchy making value judgments about a woman’s sexuality and the means by which she chooses to express it, inculcating in her feelings of guilt or unworthiness, are also intrinsic to an understanding of the guilt and feelings of panic and despair experienced by Karen Martin’s Cressida.

As a turbulent storm of angst rages inside a traumatised Cressida, she is caught up in the violence of a physical storm. Seeking refuge in a cave, she falls and ends up with dirt in her mouth, which tellingly symbolises in oneirology the need to make amends or to “clean” up an aspect of one’s life, while geophagia is a phenomenon known to affect certain pregnant women. Inadvertently, she discovers a cave filled with ancient Minoan paintings. Through the medium of the Minoan artisan Lydia, she learns to decode the images and is granted knowledge of the story of Pythia, a Minoan priestess, who established a women’s community to safeguard their ancient worship of the Mother Goddess from the onslaught of an increasingly male-dominated religion. 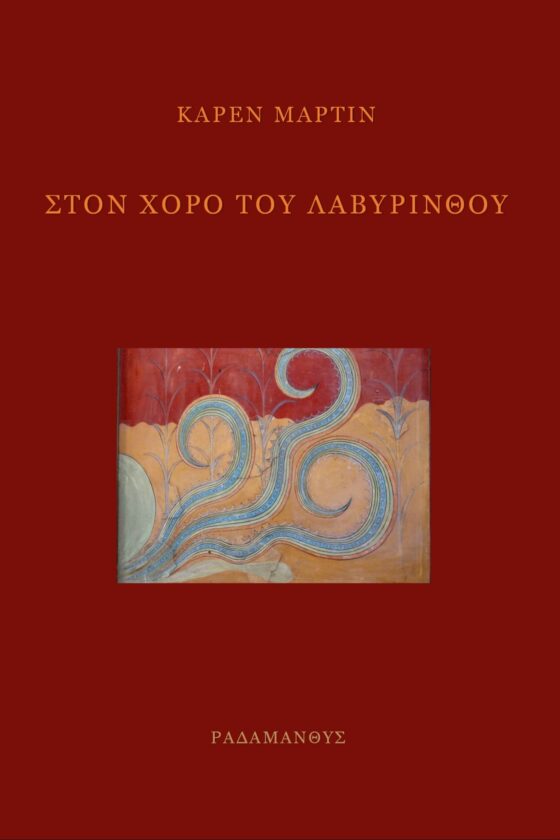 Combining ancient Greek mystery cults with the Minoans that preceded them is an inspired approach, revealing an author sensitive to and deeply cognisant of the intricacies of ancient thought and society. In each version of the novel, that relationship with time has its own phrasing. In English, the magical realism in which the story is imbued creates a narrative of rich hues and startling cadences as the past confronts the future in order to reconcile reality. In the Greek version, on the other hand, we are plunged into a discourse whose conception of time has never been Linear (A or B), and where past, present and future have always co-existed and informed each other. As a result, the element of magical realism is more subtle and nuanced, as befits a cultural narrative in which the distinction between myth and reality is not always apparent or negotiable. Consequently, in both language versions, Karen Martin’s dexterity in the transcension of time and context is exceptional. Like all initiates, her Cressida is granted the requisite gnosis in order to change her life and she is empowered through the assistance of other sympathetic and possibly initiated women, to challenge the narrative of her troubled past and to create a new future of her own choice, infused with hope and meaning.

The mediation of healing and hope through the Minoan world is significant. Narratives combining elements of the Classical World abound in Western literature and much has been written of late about how these appropriations serve to assert the superiority of “western” or “white” culture. In turn, the (decidedly fewer) Greek language treatments of the same theme often try to assert equality with the West, or to express feelings of inadequacy at the legacy of supposedly “superior” ancestors, whose example their descendants have fallen short of. Karen Martin brilliantly circumvents these vexed questions by constructing her own imagined past of a people claimed by no one and of whom we know very little and those to whom little emotional, political or gender baggage exists: the Ancient, possibly pre-Greek Minoans.

Yet even here, ambivalence lies as to the true nature of the Mother Goddess and her cult which serves as the rearguard of a united sisterhood resisting the incursion of the patriarchy and the conduit for Cressida’s re-birth from the womb of the cave as a person made anew. We simply do not know enough about the Minoan religion to plausibly assert that the Mother Goddess truly was a symbol of female empowerment. After all, if our civilisation vanished tomorrow and all that was left were a few icons or statues of the Virgin Mary, would not the archaeologists of a future time, unaware of the role of male theologians in establishing the importance of the Mother of God in the Christian religion also come to similar yet possibly erroneous conclusions? Nonetheless, as Jean-Bertrand Klus commented: “The artist creates the myth to obscure the art.” In this context, Karen Martin correctly identifies the healing and redemptive qualities of myth-making as far more important that the dry analysis of what actually may have transpired. After all, the modern Greek form of such myth-making, the paramythi, means, in its original form, consolation. And no one can deny the reality of that which heals us, or helps us to deal with the obstacles that stand in our way.

To express one’s immense love for a topos, in Karen Martin’s case, her beloved island of Crete, is one thing. To distil that love into a complex, multi-faceted narrative that skilfully melds past and present, in order to negotiate a labyrinth of persistent gender-equality issues that have dogged our social development down the centuries in a tenable and strident but not polemical manner, is quite another. In choosing to release her book in a dual English and Greek form, the author suggests to us that while historical, linguistic and social considerations may combine to shape diverse understandings and discourses of the issues affecting women in a world that still does not treat them as equals, fundamentally, there is unity in the way in which women draw upon the past wisdom and experience of those who came before them, regardless of how these are mediated, and upon each others’ strength in order to assert and claim the place that rightfully belongs to them. As such, “Dancing the Labyrinth” is a powerful and profound celebration of women’s resilience, courage and indomitability.

Both English and Greek versions of Karen Martin’s “Dancing the Labyrinth” will be launched at the Greek Centre (168 Lonsdale Street, Melbourne) by Dean Kalimniou on Sunday 25 July 2021at 2:30pm.