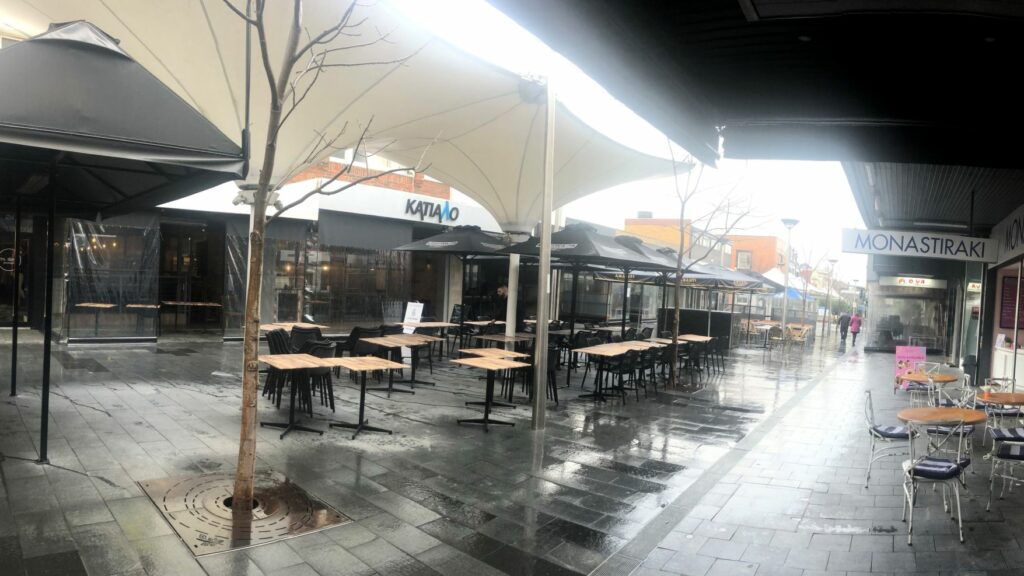 All is quiet in Oakleigh with Melbourne’s fifth lockdown taking effect on Friday morning. Photo: Supplied

The new snap lockdown that was imposed as of midnight on Friday morning and hopefully set to last until Tuesday, has again dampened hopes of recovery just weeks after the lifting of a previous lockdown.

As the new payment measures were announced to relieve the pressure on businesses, Neos Kosmos spoke to two business owners in the hospitality industry to gauge their feelings on the new lockdown.

“Nothing is happening on the streets. The more lockdowns, the worse it gets. Thank goodness this one is for only five days,” Ms Sfrantzis told Neos Kosmos.

She said people were afraid and were not coming out.

There were four staff members at the restaurant who were ready to meet take-way orders.

“The kitchen can do takeaways but we are really prepared for people who want to sit down to eat and enjoy their meal. What I will make today will pay the staff. Let’s hope this really ends on Tuesday,” Ms Sfrantzis said.

Nikos Diakopanagiotis of Nikos Tavern was philosophical about going into lockdown yet again just as things were starting to return to a semblance of “normal”.

“We had 80 booked for tonight,” he told Neos Kosmos. “Last weekend, we were allowed to have music again and we had over 200 people on Saturday.”

The preparations for a good weekend’s business were put on hold again with the latest lockdown announcement. “We had to throw out about 10 percent of our stock. We will still be open with takeaways and deliveries, so we can adjust a bit. The preparations for tonight will carry over to tomorrow,” he said.

READ MORE: Sydneysiders rush to get vaccinated, but it is not easy for some

“We were starting to get back to normal. These lockdowns seem to happen on weekends, it’s so annoying, why can’t they happen on a Monday?”

He said that while the lockdown seemed set for a week there was uncertainty over how long it would really last and this could affect bookings.

He said it would be good if the severity of the lockdown was eased to allow restaurants to operate on limited numbers so “that people could still work a bit”.

“The vaccine needs to roll out quicker, it is taking too long to get the vaccines. If we all get vaccinated this year, it will be good next year.”

He hoped that people would be feeling more secure by September to book ahead for Christmas.

Meanwhile, community events have also been cancelled as have many sporting events.

Churches have had to cancel weddings and baptisms again.

Northcote Vicar Fr Evmenios Vasilakakos said that the church has suffered huge financial losses as a result, but also spoke of the psychological stress to young couples and their families as a result.

Meanwhile the Victoria government has announced new cash grants to businesses affected by the latest lockdown.

Speaking at a press conference on Friday Premier Daniel Andrews, COVID-19 Commander, Jeroen Weimar and Victoria’s Minister for Jobs, Martin Pakula, said eligible businesses and sole traders would receive automatic payments “to minimize delays and swiftly get money into the pockets of businesses who need it most.”

Mr Pakula said that up to 90,000 businesses which had received or stood to receive payments through the Licensed Hospitality Venue Fund and Business Costs Assistance Program during the May-June lockdown would receive fresh payments of $3,000 and $2,000 respectively.

The total funding made available for the grants was $201.8 million and payments would begin next week to eligible restaurants, bars, cafes, event suppliers as well as tourism and accommodation providers as well as non-essential retailers.

In accordance with an agreement reached with the federal government, workers in Victoria lost 20 or more hours of work because of lockdown restrictions would now receive payments of $600; workers who lost between eight and 20 hours of work during lockdown would receive $375. The minister said no liquid tests would be applied to receive the payments.

The Federal Government is to fund the payments to Victorians who lived and worked in declared COVID-19 hotspots that included Greater Melbourne, the City of Greater Geelong, Queenscliff and the Surf Coast and Moorabool shires. The state government will pay Victorians outside the hotspots who were subject to lockdown.

“We know this is tough on Victorian businesses and we are standing by them, just as we’ve done from the very start of the pandemic,” the Premier said.

Mr Andrews said the latest lockdown was necessary to deal effectively with the new Delta variant. Overnight figures showed 10 locally acquired cases of COVID-19 in Victoria and one that was acquired overseas. There were 36 active cases in the state.

One of the people who tested positive yesterday was a child who was under 10 years of age who had been to the MCG.

“At the moment we have many more people who want to get vaccinated than we have vaccines for them,” Mr Andrews said.

“I don’t know that that’s the case in other parts of the world, where they’ve slapped these rules on to say, if you haven’t had your two jabs, you can’t come in.

“We’ll get to that point maybe, where your vaccine is a kind of passport to do things. That wouldn’t be a Victorian thing. We would try and get a national framework there,” said Mr Andrews who noted that the vaccine rollout was under federal government control.

“No one wanted to be here, but Victorians know we must take decisive action to drive this virus down – so we are in this situation for days, not months.”