James H Barron spent 10 years researching the life of an enigmatic Greek journalist. The result is his critically acclaimed “The Greek Connection The Life of Elias Demetracopoulos and the Untold Story of Watergate”. 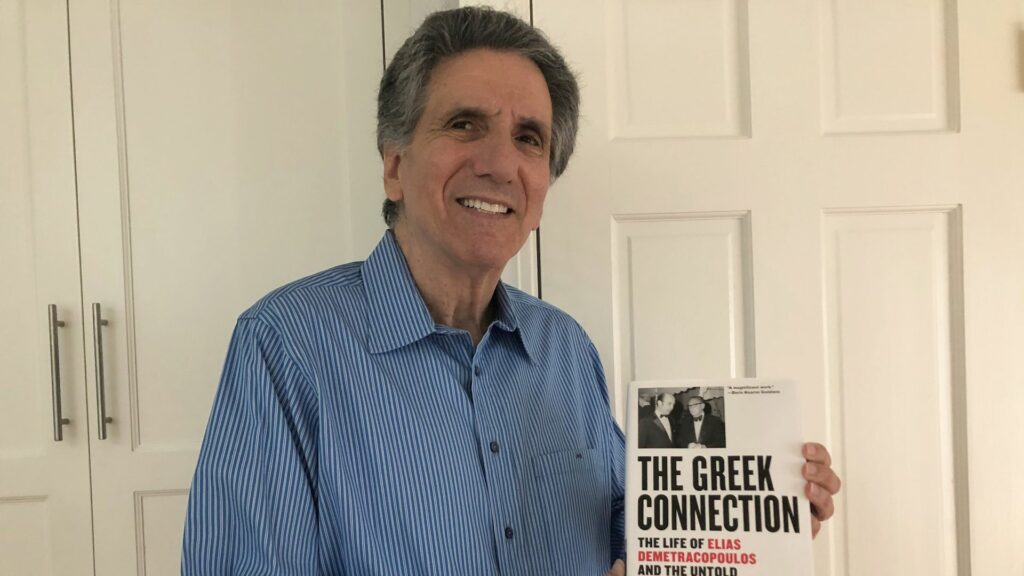 The author James H Barron with his critically acclaimed book “The Greek Connection The Life of Elias Demetracopoulos and the Untold Story of Watergate”. Photo: Supplied

“The Greek Connection: The Life of Elias Demetracopoulos and the Untold Story of Watergate” by James H Barron is a much-acclaimed book that more than accomplishes the seemingly impossible task of weaving the stories of post-war Greece, Cyprus and America through the life of the enigmatic and charismatic Greek journalist and anti-junta activist Elias Demetracopoulos.

A US investigative journalist and lawyer, Mr Barron had set out to research the link between the Greek military junta (1967-1974), and the US administration of Richard Nixon through the Greek-American magnate Tom Pappas who served as the middleman.

Through Pappas, the junta funnelled $549,000 (worth $4million today) to the Richard Nixon campaign weeks before its successful bid for the presidency in 1968. At this time Demetracopoulos had fled Greece in fear of his life and was living in Washington, his immigration status uncertain, but determined to maintain pressure against the colonels.

It was thanks to his contacts in Greece, that Demetracopoulos got wind of the junta’s illicit payment to Richard Nixon’s campaign and passed the information to the Democratic party and the newspapers. While the story should have been enough to lose Nixon the election it did not gain enough traction to affect the outcome. It was eventually stifled by a Nixon administration that threw its weight firmly behind the colonels.

Pappas was to be implicated in the Watergate scandal as “the Greek bearing gifts.”

Increasingly Mr Barron became more interested in the story of Demetracopoulos himself who made a living in the US capital as a consultant for brokerage firm Brimberg. For years the Greek devoted six hours each day to Brimberg and 14 hours to the Greek cause.

He became, Mr Barron writes:”an interlocutor of choice for people trapped in Greece wanting to get the word out that the rosy portrayals by the Greek Embassy in Washington were misleading.”

As Greece’s youngest political editor during the 1950s and 60s Demetracopoulos had developed many important friendships in the US and in Greece. He had exposed some of the deals Pappas had made with the Greek government that were heavily weighted in Pappas’ favour. His work had also led him to look at the growing role of the United States in Greece.

READ MORE: Greek democracy’s gadfly: the journalist who carried the fight to the junta.

Some of his stories laid bare policies that US and Greek officials tried hard to keep secret. Demetracopoulos was able to convince key people to talk to him and override official sanctions. The CIA and US State Department drew up dossiers that peddled rumours that that Demetracopoulos was in the pay of foreign powers or was a willing tool of both right and left wing politicians.

It was deliberate disinformation campaign dogged him throughout his career and his exile in the US, he lost work opportunities because of it and and he spent his later years in the US doggedly seeking and finally gaining exoneration.

Despite the campaign against him Demetracopoulos still broke important stories that he passed on to influential journalists like Jack Anderson, Roland Evans and Robert Novak.

In the difficulties he faced with the Nixon administration, Demetracopoulos could count on the support of Republicans like Louise Gore (second cousin to former Vice-President Al Gore’s) and Admiral Arleigh Burke as well as Democrat heavyweights like Ted Kennedy and Eugene McCarthy.

After 1967, Demtracopoulos served as a conduit maintaining links with fellow exiles scattered in the capitals of Europe, such as Constantine Karamanlis Andreas Papandreou and Melina Mercouri.

In the US, Demetracopoulos worked alone and ceaselessly to sway opinion in favour of Greek democracy. Eleni Vlachou, the publisher of Kathimerini advised Demetracopoulos: “Don’t expect the militaries and the merchants who rule America to help you back to freedom. You have to BECOME A PROBLEM … . . . If Greeks want freedom, they will have to fight for it. In any way they can.

Demetracopoulos was the suave, well-dressed presence in many social gatherings in Athens and later while in exile in Washington. He used his considerable connections to promote the Greek cause and proves a perfect a vehicle for Mr Barron to wade through the turbulent waters of Greek and American politics of the era.

There had been numerous previous efforts to write a biography on Elia Demetracopoulos. Mr Barron spent five years interviewing his subject. He spent over 10 years carrying out research for the book and the reader benefits enormously.

The enigmatic and independent figure Demetracopoulos proves the perfect vehicle for navigating the complex saga of Greek and American politics . Mr Barron’s book is both gripping and deeply informative.

“The Greek Connection The Life of Elias Demetracopoulos and the Untold Story of Watergate” by James H Barron is published by Penguin Random House.