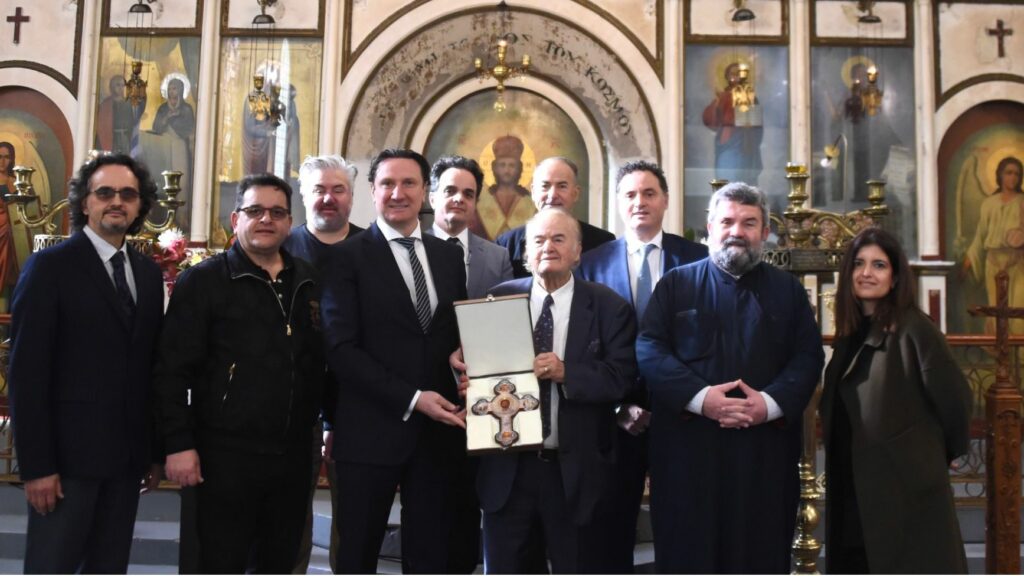 Andreas Andrianopoulos and members of the Greek Community of Melbourne. Photo: Supplied

The Andrianopoulos family is continuing its efforts to restore the Evangelismos Church to its former glory.

Andreas Andrianopoulos was honoured by the Greek Community of Melbourne on 25 March, the historic church in East Melbourne was celebrating its feast day, which coincided with the 200th anniversary of the Greek War of Independence.

The well-known Melbourne family have been significant supporters and benefactors of the GCM’s work dating back many years.

Their involvement with the East Melbourne historic church has a long history and is also very personal for the family.

Mr Andreas Andrianopoulos married his beloved Sophia there in 1957, and he first funded works at the Church with the installation of it’s parquetry floor over 40 years ago.

“This church is a very important part of my life and the lives of many Greek Melburnians,” Mr Andrianopoulos said during his visit to the church to announce the next round of support which his family is offering.

“For many years, it was the only church we had, it was a meeting place, a place where we celebrated our greatest joys and our deepest sorrows.

“I am only too happy to see it resotred.

The 119-year-old church was significantly damaged in a fire, which took place in 2016. Since then, painstaking restorative works have been taking place thanks to GCM funding. These have included a rebuild of the mezzanine level, replacement of the heritage-listed leadlight windows and the ongoing archaeological work to restore the “templo”, the iconostasis featuring religious icons.

Moved by the family’s support, Mr Papastergiadis said, “What can I say about Andrea, his sons Chris, George, Nick and Dimitri and the whole of the Andrianopoulos family? Their support of the GCM and its programs is significant and ongoing and this latest gift isjust one part of the ongoing support over many years by the Andrianoipoulos family. We are humbled and incredibly appreciative.”

Mr Papastergiadis also pointed out that the community was founded with the support of benefactors.

READ MORE: Century-old mystery unravelled: Looking beneath the defaced foundation stone of the Holy Church of Evangelismos of Melbourne

“Construction of Evangelismos was made possible in the late 1890’s as a result of the generous donations of early Greeks in Melbourne,” he said in reference to Evangelismos, completed in 1901 as the first and only Orthodox Christian Church in Victoria for many years.

“Fundamental to the development of the GCM is the continuous support by benefactors who value the role of the GCM in the complex fabric of our community.”

The Greek Community of Melbourne was created in 1897, and the creation of a place of worship was among its priorities at the time. Along with the heritage listed Evangelismos, the GCM runs five churches in Melbourne alongside its work in education, cultural practice and community advocacy.