Lockdown restrictions expected to ease in Victoria from Wednesday 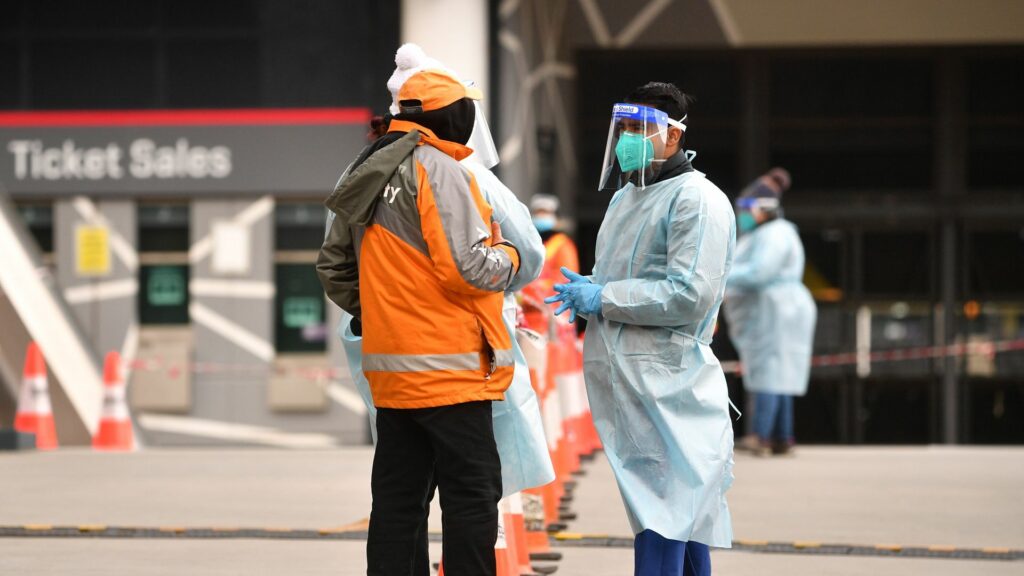 A healthcare worker is seen outside of a pop-up COVID-19 testing facility outside of the LaCrosse apartment block in Docklands, Melbourne. Photo: AAP/James Ross

Victoria noted 10 new cases of COVID-19 on Tuesday, ahead of an expected easing of restrictions from 11.59pm Tuesday.

Victoria’s Premier Daniel Andrews is expected to announce the reopening of schools and gyms from Wednesday, while hospitality will also reopen with density caps.

The five kilometre travel bubble is also expected to be lifted.

Hairdressers and beauticians are also likely to operate as workers return to the office at a maximum of 25 per cent capacity or 10 people.

Government sources state that the restrictions will cautiously open in order to prevent the rapid spread of the Delta variant of the virus, while final rules are made ahead of a lunchtime announcement.

Authorities and Cabinet are meeting this morning to finalise the rules, which – unlike Lockdown 4.0 – are expected to be the same across regional and metropolitan regions.

Victoria’s Health Minister Martin Foley said that there are different factors at play during this lockdown than the previous one, mainly the threat posed by New South Wales, and the hard border closure will remain in place with the neighbouring state which confirmed 145 cases on Monday.

Masks will continue to be mandatory indoors and outdoors.

Households will continue to be isolated, with a restriction on visitors, however outdoors Victorians will again be allowed to gather in groups of 10.

There are currently 179 active cases in Victoria, the largest number in the community since September 2020.

“When you reflect where we’ve been … 22 cases over two days is a significant figure,” Mr Foley said.

“It’s not a risk we take lightly.”