Greeks ditched from the Census: The Greek omission

Greeks, unlike Italians and Germans, are lumped in with ‘Others’ in ancestry option Australian households will begin to receive instructions on how to fill out the 2021 Census next month, ahead of the 10 August census date.

Held every five years by the Australian Bureau of Statistics (ABS), this year’s census will be crucial in documenting the identity of Australians at a time of pandemic. Data hopes to reveal who lives in Australia, how and where they live and where they have come from.

The results will inform vital services and infrastructure, however in the question asking for people to list their ancestry, a number of countries are listed. These include English, Irish, Scottish, Italian, German, Aboriginal, Torres Strait Islander and Australian, but not Greeks.

This means that those of Greek origin would need to add their background as ‘Other’, regardless of the fact that the Greek community is robust, with the 2016 census recording 397,431 people of Greek ancestry, and 93,740 born in Greece – making Australia home to one of the largest Greek communities in the world.

Andrew Giles, Shadow Minister for Multicultural Affairs, said, “I’m not sure why particular cultural, national and ethnic backgrounds have been selected in the census, but I’ve been concerned for some time that we don’t accurately or adequately measure our diversity.”

He told Neos Kosmos that “the census should enable us to accurately understand who we are today – in a proudly multicultural society, this should be informed by close consultation with community leaders so that the right questions are asked, in a way that enables the most useful answers to be obtained.”

Former minister Theo Theophanous said that the wording of a census is important so that results are accurate.

“They consistently understate how many Greeks there are in Australia by the way they frame the questions,” Mr Theophanous told Neos Kosmos.

“What is obvious is that Greece or Greek should be included as one of the choices alongside countries like Italy and Germany. My understanding is that Greece, up until now, has always been an option.”

Being of Greek and Cypriot ancestry, he said it is important for the census to “understand the complexity of particular countries such as Cyprus where an indication of ancestry from Cyprus would be of no value whatsoever unless you also ask the question whether someone is from Greek or Turkish Cypriot ancestry.”

“If you understate by as much as half the number of a particular ethnic group, it lowers their political influence in the minds of the government,” he said, adding the government has always been “behind in terms of understanding the complexity of multiculturalism and ethnic background”. 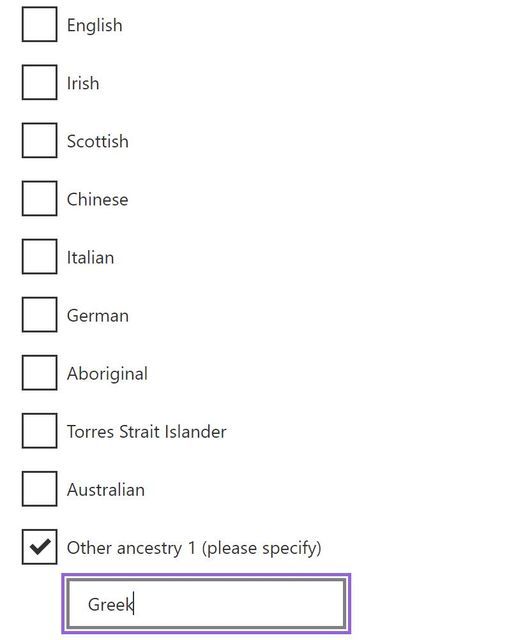 Lawyer Dean Kalimniou understands that “while it is not expedient for a government to list every ethnic identity on a census form”, he does not understand why Greeks – “one of the oldest, historically and numerically significant communities in this country” – would be omitted.
“How is multiculturalism reinforced when ethnicities are compelled to chose the box ‘Other’ while at the same time scrolling past a purported ‘Australian’ ancestry, that is distinguished from an ‘Aboriginal’ ancestry?”

Mr Giles had written to the ABS in 2019 to request that the 2021 census take “steps to get better answers, building on the work of FECCA and others”.

Neos Kosmos has reached out to the ABS and Migrant Services and Multicultural Affairs Minister Alex Hawke and is awaiting a response.