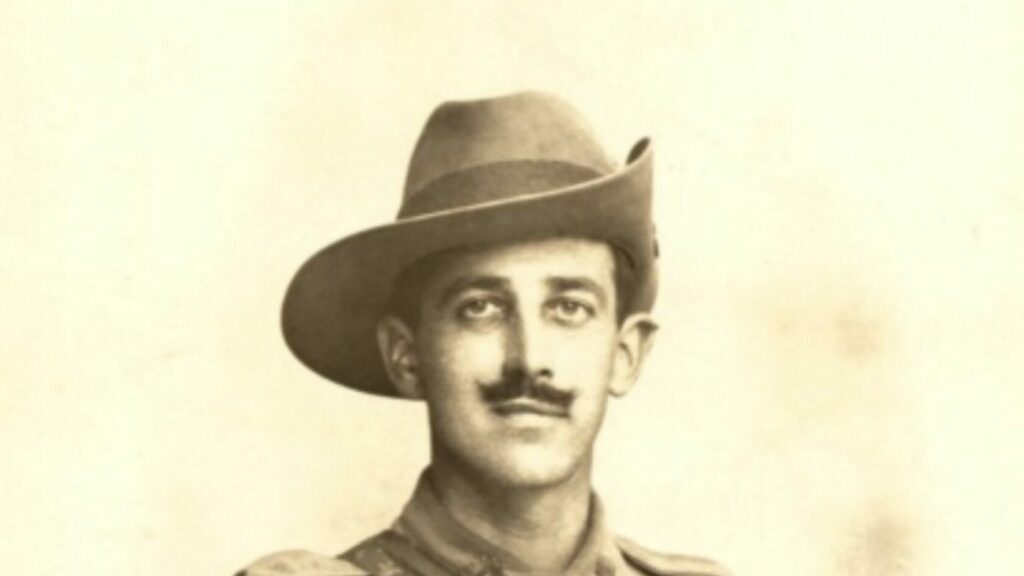 Portrait of Henry Gissing during the First World War. Courtesy of Peter Gissing.

Recently I talked with Peter Gissing from Wagga Wagga. Peter’s grandfather Henry  – or Harry as he was known – was one of those veterans who not only served on Lemnos during the Gallipoli campaign but also one who took photographs and kept one of the most comprehensive and interesting diaries of his experience of this Greek Island in 1915-16. While few of his photographs have survived, those of us interested in the Hellenic link to Anzac are indebted to him and his family for the preservation of his wonderful diary. This is Henry’s story.

A Sydney resident and pharmacist when the war broke out, Henry enlisted into the Australian Imperial Force in December 1914 and would serve with the Australian Army Medical Corps’ 1st Field Ambulance.

Henry sailed into Lemnos’ great Mudros Bay on 7th April before the landings at Gallipoli and would be transferred ashore to East Mudros for service with the 1st Australian Stationary Hospital, the first Australian field hospital to be established on Lemnos. He would serve here for a number of months, interrupted by service on various hospital ships and other transports ferrying the wounded and sick between Gallipoli and Lemnos. He would also be with his unit at the Anzac Camp across the bay at Sarpi (modern-day Kallithea). He would not depart Lemnos until January 1916. What did this 27-year-old Australian experience on Lemnos?

Of course as a soldier Henry would record the life of Lemnos’ military bases. As he arrived at Lemnos, he wrote of the arrival of more and more ships in the days prior to the landings, until they were “quite filling up the harbour.” He wrote about his work caring for the sick and wounded of Gallipoli, of the exposure to the extremes of weather on Lemnos, of the hospital at East Mudros being nearly “washed out” by rain during winter and then the patients and staff subjected to heat, dust and swarms of flies in summer.

One of his most moving accounts is of watching patients arriving at the pier – most probably the Australian Pier – and walking up the hill to the hospital – writing in his diary that it was “the most forlorn picture I have seen … [they] straggle up the hill with their soiled clothing looking in many cases the picture of misery.” He also wrote of the dangers of air attack on Lemnos, noting German airplanes bombed East Mudros and killed some French soldiers in May. And he would write of having to perform “the sombre duty of rowing two corpses ashore for burial, a very sad sight but one becoming very common.” It would have been war-time experiences such as these that Henry had in mind when he spoke of his desire to “debunk the glories of war” and of the need to work for peace in his 1937 Anzac Day address in Wagga Wagga.
Henry would also write of his appreciation of the island itself, capturing the life of Lemnos over 100 years ago. He recorded his travels around the areas where he was camped (at both East Mudros and later Sarpi, modern day Kalithea), as well as his journeys further afield to the Allied hospitals across the bay at West Mudros and to the surrounding villages and on to the capital Castro (modern day Myrina) and the ancient thermal baths at Therma. 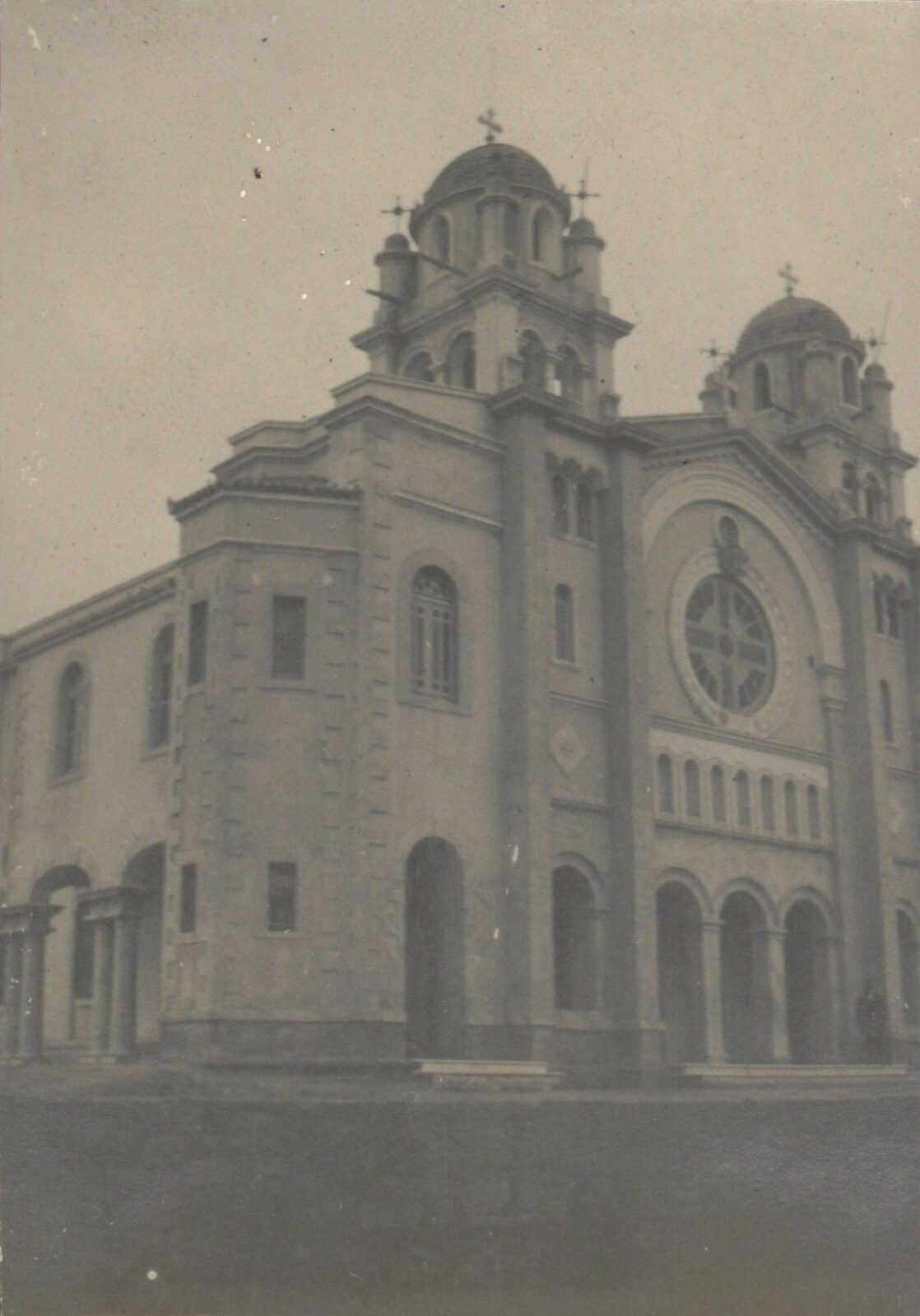 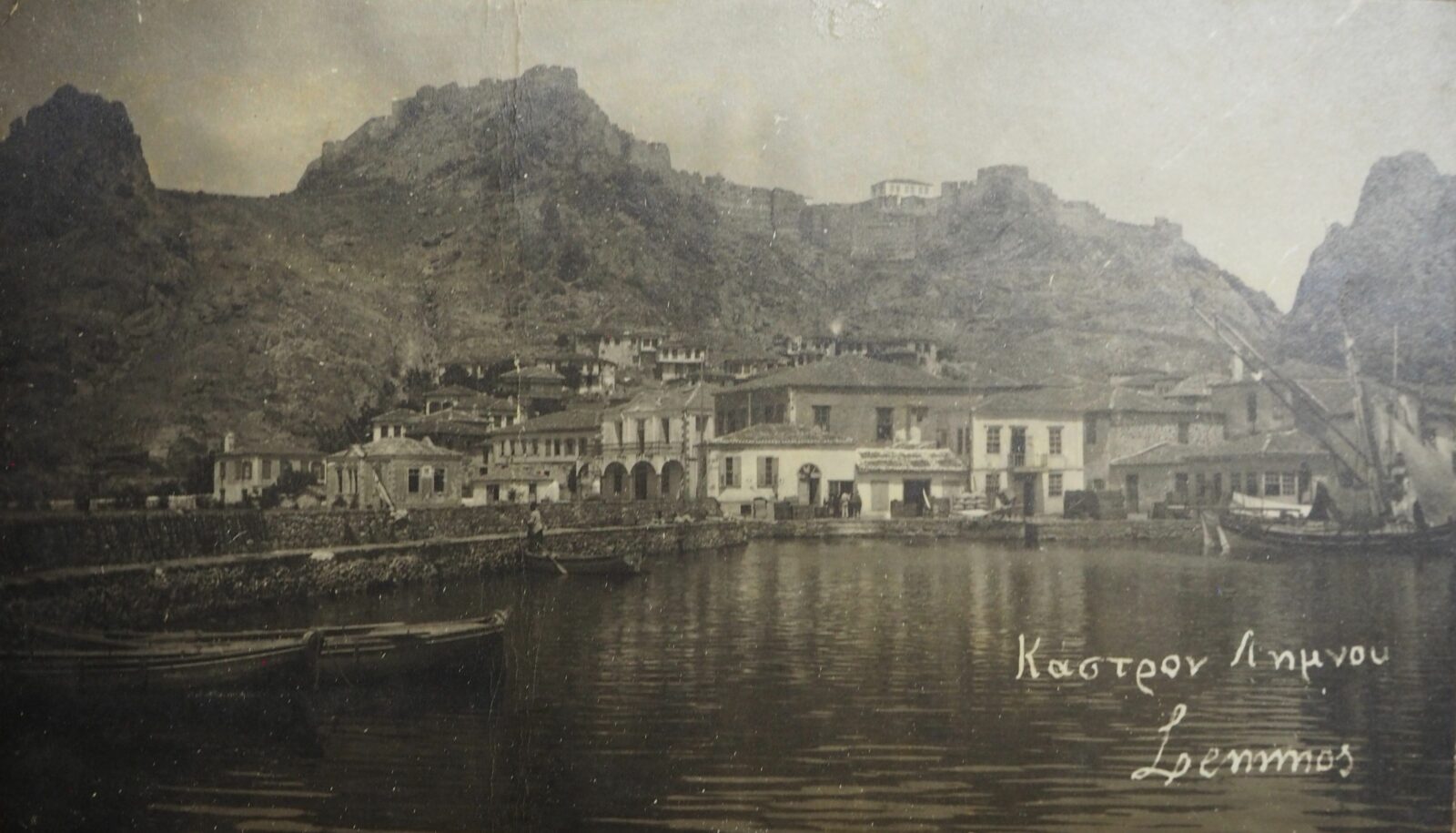 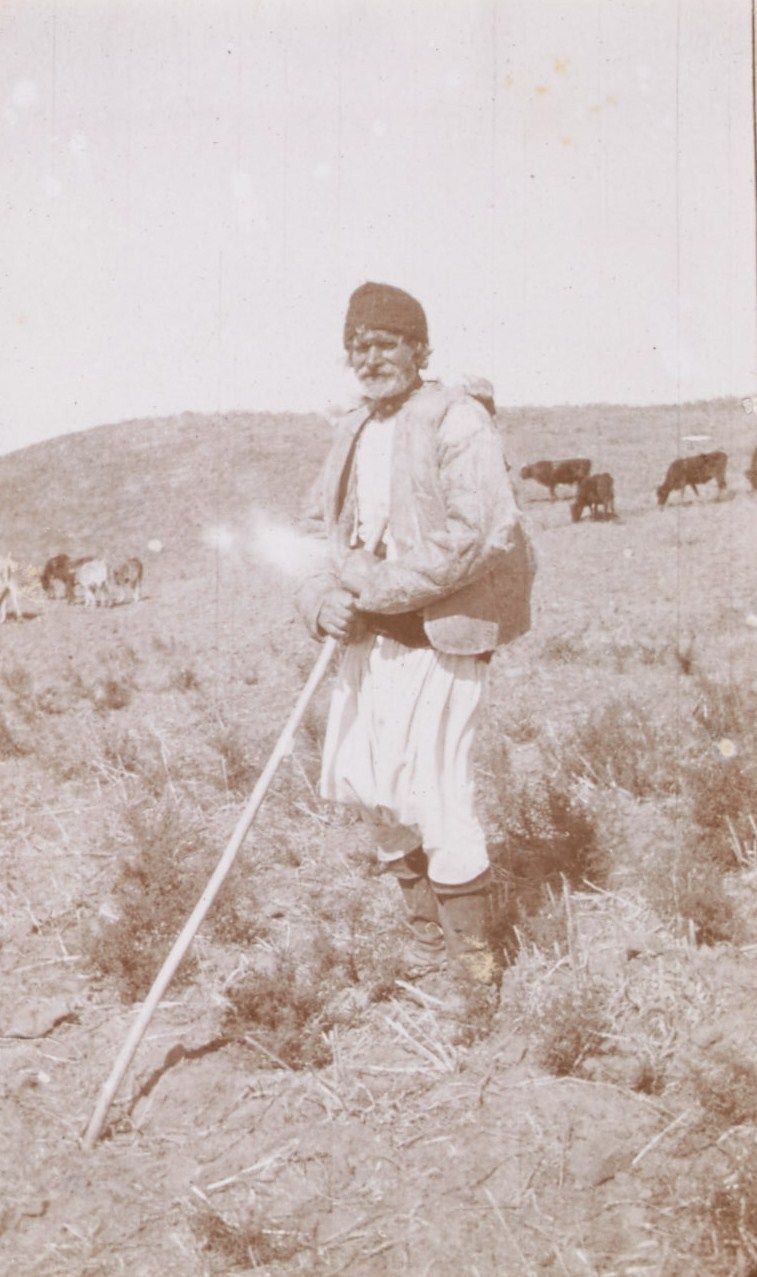 A local shepherd, Lemnos, 1915, not unlike the farmer who shared a watermelon with Henry in 1915. James Edward McPhee Collection. Courtesy State Library of Victoria. 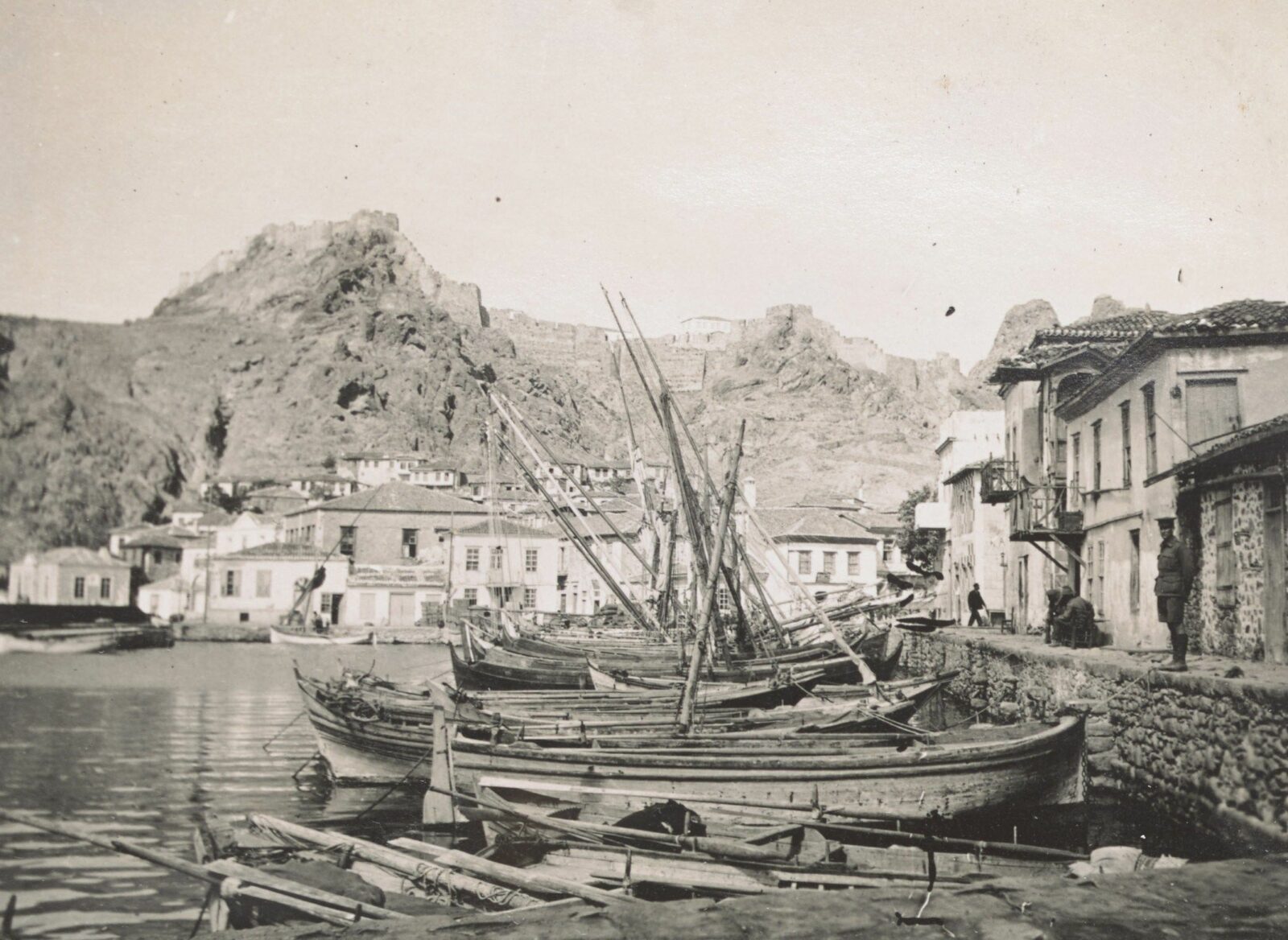 Castro as Henry would have experienced it in 1915. James Edward McPhee Collection. Courtesy State Library of Victoria.

Even as he arrived in Mudros Bay, Henry wrote of buying some lovely oranges from local vendors in little boats who surrounded the Allied ships anchored in Mudros Bay. And when he landed on the eastern shore of the Bay he wrote of its fig trees and beautiful fields of poppies and other flowers.

Soon he was walking through Lemnos’ villages, recording the buildings and streets in words familiar to all who have wander through Greek island villages. The houses had very low roofs and the streets meandered through the structures, the houses appearing to have been set down anywhere. He visited Mudros’ great Greek Orthodox Church of Evangelismos Theotokou which dominated the skyline of the town, taking photographs and giving the Priest three pence to light two candles. He also described the bustle of military and naval personnel who thronged Mudros’ streets and its bars. On one occasion he witnessed locals celebrating and performing what he referred to as “their national dance” as he enjoyed a few glasses of wine with his new French comrades!

On a couple of occasions Henry wrote of visiting local schools, on one occasion gazing through an open door and hearing the students recite their lessons. On the other occasion, he wrote of visiting a school with other members of his unit and their joining in with their concertina as the students sang the Greek national anthem.

Perhaps one of the most touching stories from his diary is when Henry went for a walk in the hills behind Mudros, where he encountered a lone farmer digging in his field. A few common words were exchanged, followed by shrugs and the nodding of heads. Soon Henry has given his new friend a cigarette and the farmer sat down with him, sharing with Henry his own sweet melon.

Later in the campaign Henry would venture across the Bay and on to Castro (modern day Myrina) and Therma, quite a journey. The latter was an attraction for the soldiers on Lemnos, with its hot baths, fresh food and beverages. Henry found the whole experience “altogether … very enjoyable.” The place was often crowded with Allied service personnel, including officers and nurses. I’ve had the pleasure of enjoying these same baths recently – an experience not to be missed!

One of the best accounts in Henry’s diary concerns his visit to Castro on 19 September. After hiring donkeys for the journey at Portianos (modern day Portianou), Henry and his comrades arrived at Lemnos’ capital for a day of explorations, shopping and hospitality! During lunch in a local restaurant, they soon befriended a local who spoke “splendid English” and assisted them in ordering their meal of fried fish and chips, chops and tea. After sharing a bottle of wine with their new friend, the local insisted on showing them the sights of the capital. Sightseeing in the town, Henry and his party walked up to the ruined castle above the town. Visiting the local Greek Orthodox Church with its icons, murals, silver lamps and chandeliers, Henry wrote that it all gave “one the impression of ancient worship.” Henry then went shopping for mementos, buying some local coins and stamps, as well as a pair of what he called “Greek shoes” and a fine “Turkish rug.” After a few bottles of “very fine beer from Salonika” in one of Castro’s taverns, Henry discovered that their donkeys and young guide had gone, the young boy apparently scared of travelling home in the dark. Henry and his party then made their way back to West Mudros by foot, where they slept at one of the hospitals until returning to East Mudros the following day. A fine day out – if not for the war!

READ MORE: ANZAC memorial on Lemnos to pay tribute to soldiers who saw peace for the last time

He also wrote of witnessing a local blacksmith at work making nails at his forge in Portianos, the village crowded with soldiers from the nearby camp at Sarpi, and enjoying a swim near the village of Kondia (modern day Kontias).

As you can see Henry’s diary is one those tangible recordings of the deep connection between Australia and Greece through the Gallipoli campaign. Henry’s recording of life on Lemnos is both a unique account of the lives of these Greek villages and villagers but also of the first interaction between our two peoples. It is a treasure trove of information on Lemnos during the Gallipoli campaign. He has left us all a window into life on this lovely Greek island – both for the Australians who came there and for the local villagers who they met. Recently I was asked to suggest an Australian diary from the period which could be consulted as a guide when visiting Lemnos, Henry’s diary immediately came to mind. One could not find a better first-hand account to guide one across Lemnos as it was transformed by its role in this momentous campaign.
Henry’s descendants treasure his diary and have both donated it to the State Library of NSW as well as having it published. Without access to Henry’s account my own Lemnos book would have been much the poorer. The Lemnos Gallipoli Commemorative Committee was glad to present Peter Gissing with a copy of Lemnos & Gallipoli Revealed in honour of his grandfather.

And it was through the service of those like Henry in the medical services established on Lemnos – the doctors, nurses, orderlies and other medical staff – that many soldiers survived the ravages and horrors of Gallipoli. A lesson from Lemnos’ link to Anzac for all of us to consider as we praise the work of our own health workers during this current pandemic. A big thank you to Henry and all other health workers.

Jim Claven is a trained historian, freelance writer and has been Secretary of the Lemnos Gallipoli Commemorative Committee since its establishment in 2011. He has researched the Hellenic link to Anzac across both world wars for many years and is the author of the recently published book, Lemnos and Gallipoli Revealed: A Pictorial History of the Anzacs in the Aegean 1915-16. To order a copy of the book please contact Jim at jimclaven@yahoo.com.au.