Exclusive interview: Peeling the layers of Yanis Varoufakis and the great Greek conundrum

Ahead of his appearance at Antidote, the Sydney Opera House’s festival of ideas and change, the former finance minister and now General Secretary of the MeRA25 party in Greece, joined Neos Kosmos to discuss the past, the present and future of the Greek economic situation. 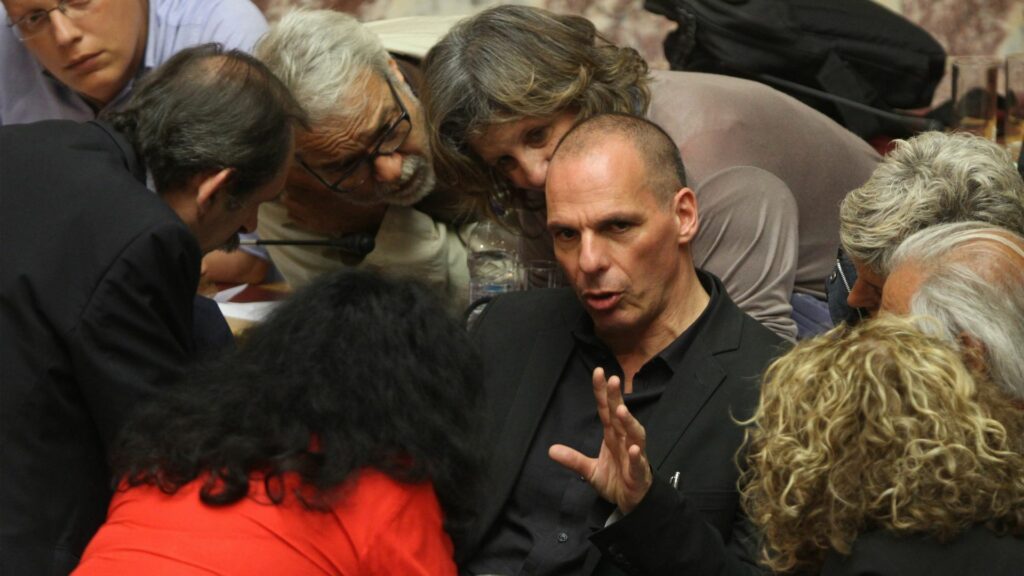 Former Greek finance minister Yanis Varoufakis (C) talks with MPs during a debate on the referendum in a plenary session of the Greek Parliament in 2015 Photo: AAP via EPA/Alexandros Vlachos

Ancient Greek theatre shared myths and legends, bringing wonder and igniting hope in the spectators who would come and watch.

For years now, many Greek citizens have seen and continue to feel the impact of the country’s own tragedy; the ongoing economic crisis. Someone, who at one point was in the eye of one of Greece’s greatest financial storms, is Greece’s former finance minister Yanis Varoufakis.

Mr Varoufakis is the protagonist of his own legend, one that stretches back a few thousand years less than those our ancient ancestors had witnessed.

When capital controls were placed on Greece in June 2015, rumours swirled that the former finance minister went home to his wife visual artist Danae Stratou, and declared ‘Honey, I closed the banks!’

Mr Varoufakis insists that this too was merely a myth, or in his own words, a “toxic lie”.

“TOXIC LIES” AND THE “DEBT COLONY”

“The reason why you heard that lie about me is firstly, the banks did not have to close. The banks were shut by the European Central Bank in a blatant attempt to blackmail the proud people, the Greeks, into taking another credit card, to pretend that we were not bankrupt when we were. Because it would be convenient for the financiers,” he told Neos Kosmos.

“It is a tale of David against the Goliath where David loses, because our side was disunited. This is the story of the Greeks. I mean we put up fantastic fights and then we lose because we’re not united amongst ourselves.”

“But it’s remarkable that this is what sticks, six years after the event.”

Reflecting further on the events that unfolded six years ago, Mr Varoufakis believes his actions during his six-month SYRIZA tenure left no lasting impact.

“I wish that they [his actions] had impacted Greece today,” he said, lamenting the lost opportunities of those first six months in 2015.

“The GFC Ground Zero is Greece. For some reason, our little country attracts these global disasters, for reasons we’re not going to get into now. And the way to cover up the mess, was in 2010, to give a huge credit card. The largest credit card in the history of humanity to the most bankrupt state,” Mr Varoufakis said.

Greece was on its last tether after being handed many “credit cards” and so 62 per cent of citizens saw SYRIZA and Mr Varoufakis as a new hope for Greece. A Greece that would no longer bend at the knee for the European banks.

The former finance minister wanted the country to “embrace bankruptcy” and “wipe out the debt that can never be repaid”.

“I made headlines because for them it was unheard of. The finance minister who said no to credit cards,” he said.

“What was the impact of it in the end? Zero. Because my prime minister, Alexis Tsipras, in the end succumbed. I resigned, he took the credit card and we continued along the way. And so it was a lost opportunity. That was what my six months in office came to.”

Greece’s majority ‘no’ vote for the 2015 memorandum threw SYRIZA into a spin.

As a result of the party’s internal struggle to be a united front, and the then prime minister’s180 degree turn on the vote, Mr Varoufakis resigned. Today, their relationship once built on hope for a better Greece, ceases to exist.

“We got together in the context of the common cause. He abandoned that cause, and it’s not a personal animosity at all…Let’s say we were here having a coffee. What would we talk about? It’s impossible to have a conversation because, he knows that I know, that he knows,” Mr Varoufakis said.

“So he cannot confess to me what he did, because then he would have a problem going about his business on a daily basis.”

Mr Varoufakis has no problems going about his own daily business with a clear conscience, despite the partial blame he often gets for the capital controls that were imposed on Greece.

“If you look at the GDP of national income in 2015 it stabilised, it was falling precipitously until we were elected. So, no, absolutely not. We were not responsible whether I disagree with Alexis Tsipras or not, we stabilised this. Greece has been stabilised at a very low level. But the fall came before we were in government. If you look at the support of the poor, I gave you an example. The first thing I did in government was to give a MasterCard to poor families to put food on the table for the first time in years.”

While the financial tug-of-war continues in Greece, it begs to question whose, or perhaps even what purpose Greece really serves.

“We don’t need a very sophisticated analysis about the state of our country. It’s a debt colony. The British treated India under the Raj far more nicely and politely and humanely than what Brussels and Frankfurt and Berlin are doing these days in Greece, so this is why I’m still in politics. We have a political party. We are in Parliament. It’s called MeRA25 and we’re fighting for liberation.”

Mr Varoufakis has a soft spot for Australia for more than just the fact that he is Greek-Australian himself. His daughter Xenia, is a “true blue Aussie” Sydneysider.

It is perhaps for this reason that his fight for the Diaspora vote is so pertinent.

In May, Greek leftist parties voted against the amendment proposed by the governing New Democracy party, to remove all restrictions for the Diaspora to vote in national elections.

Mr Varoufakis’ MeRA25 party is vocal in its support for the Diaspora vote, but not under the conditions that were set by the governing party.

“It was a terrible piece of legislation… Talk to the older members of the Greek community in any city or town [sic] in Australia. They would tell you quite correctly, that Greek governments have always ignored them,” he said.

The legislation that was put forward did not give Greeks of the Diaspora the chance to have the same voting rights as those in Greece. This includes being given the opportunity to stand in the election as a candidate.

“If you’re a Greek citizen, you should have exactly the same electoral rights as a Greek living in Kavala or Patra, that’s our view. So in 2019 I had a discussion with prime minister Kyriakos Mitsotakis, and behind closed doors he agreed with the proposal…This is our view. I’ve used the same rights for the Greeks living in Greece with the Greeks living outside of Greece, which means the right to elect and to be elected,” Mr Varoufakis said.

Rather than turning Greeks outside of Greece into “second class citizens”, Mr Varoufakis wants to give them the opportunity to bolster their Greek communities in their respective countries and no longer be the “clientele” of the Greek state.

THE CONTRADICTIONS OF ACADEMIA

Deeper issues regarding the autonomy of humankind have been woven into the fabric of modern society. In his novel Another Now Mr Varoufakis delves into the alternatives to a capitalist run world.

His characters are an amalgamation of, as he puts it, “different views that I think are valid in my head, which I have not sorted out yet”.

As it is written, Iris, a radical left-winger, shares the views her author has on the operation of universities and how rather than imparting skills, they are about “producing flexible minions, dying to do as they are told”.

Having taught at the University of Sydney himself, it would seem a blatant contradiction for Mr Varoufakis to hold such views, but he explains there are two sides to the scale.

“…What they do is they train you, how to be a good employee, how to learn to meet deadlines, to appear in meetings, to submit essays at the right moment and be compliant. But at the same time they give you an opportunity to come up with heretical thinking, because let’s face it, today’s knowledge is, was, a heresy a few years back. And that’s how humanity progresses.”

Funnily enough had he not entered politics, Mr Varoufakis said that he would “still be in academia”.

“I DON’T WANT GREECE TO BE HAWAII”

Greece still has a lot of mess to clean up, but for every step forward, the country gets swept back miles.

In Mr Varoufakis’ eyes, Greece is already on the path to a dystopian future that mirrors the situation of Hawaii’.

“If you go to Hawaii, to the Big Island what you’ll find is the native population live in the center of the of the island, in slums. The coastal area, which is beautiful, they’re all five-star hotels owned by foreigners and visited by foreigners and the local population who live in the slums are bussed into the hotels, to clean the toilets and to play Hawaiian guitars for the tourists. And then they’re brought back into the slums, in the centre of the island at midnight. I don’t want Greece to become that, but it is becoming,” he explained.

The dream of a prosperous Greece is not all lost in Mr Varoufakis’ eyes, who instead has his sights set on promoting a greener way of living.

“I want this place to be a place of shared prosperity for Greeks. I would like Greece to be a hub for green energy, to use the wonderful winds that we have in the Aegean and floating windmills, to power and create renewable electricity, to create hydrogen so that we can supply the rest of the Mediterranean Europe with clean energy. That’s something that, for instance, would create a lot of technology, a lot of good quality green jobs here in Greece to retain the great youth that we have…”