Greece on fire: scenes of destruction as 98 new fires break out 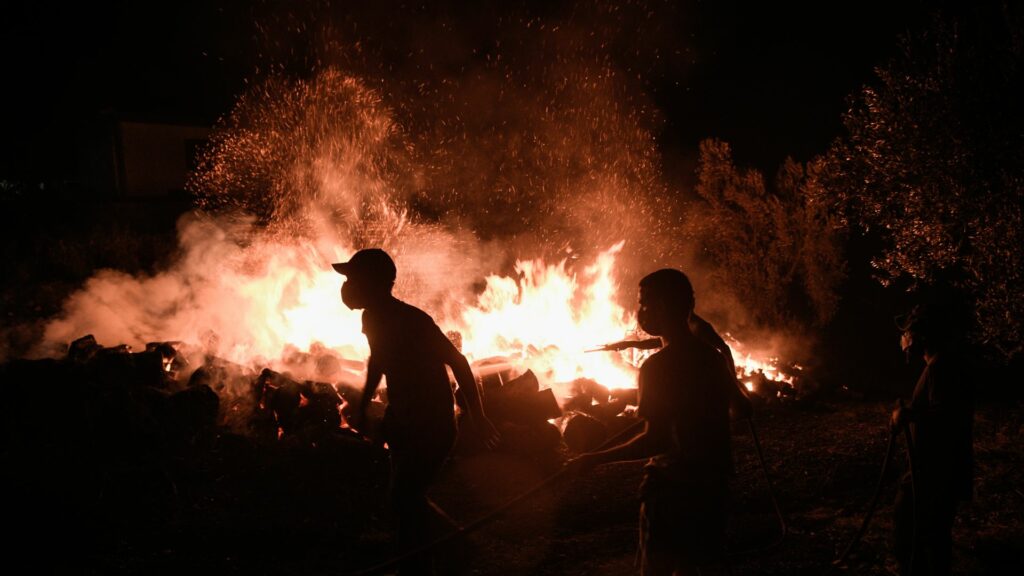 The fire in northern Attica has been approaching Malakassa, and is still out of control. At the present time, it is burning through a thick forest. Firefighters with heavy machinery are trying to break its progress.

A large fire front is heading to Agios Stefanos, a suburb north of Athens, currently burning the Pefkofito settlement in the north of it, while it has reached the outer edges of Stamata, south of it, the Fire Brigade said on Friday evening. Rodopoli and Stamata are being evacuated.

Firefighters are trying to put it out by ground and air forces, while police is removing residents of the areas and of settlements under an earlier evacuation order.

The front is part of the fire that broke out across from Afidnes, east of Varybobi and west of the national highway. The fire reached the national highway, moved north to Kapandriti and then turned south, nearly reaching the water reservoir of Limni Marathona.

Three more fronts are raging uncontrollably, at homes in Afidnes, Kryoneri and Ippokratios Politia, all of which have been evacuated.

The community of Thrakomakedones in northern Attica has been ordered to evacuate towards Acharnes via Kimis Avenue, as a fire front that started near Tatoi airport is approaching the area, the Fire Brigade said on Friday evening.

This fire front is also approaching the area of Olympic Village, where firefighters have created a bold patch to try to stop the fire on its tracks.

The alert was sent via the Emergency European number 112.

A foreign national who claimed she is Afghan was arrested at Pedion tou Areos park in Athens on Friday afternoon by police patroling the area after a ban forbidding visits to parks and forests through Greece.

The woman was arrested around 17:30, a few minutes after a fire broke out in the park on the side facing Alexandras Avenue. It was put out immediately by the Fire Brigade.

She was carrying two lighters, petrol and flammable materials, as well as a gas cannister to fill lighters.

Police said she was emotionally disturbed. She was led initially to the Kypseli police station and from there to the investigators of the Fire Brigade.

Meanwhile, a 43-year-old Greek who was arrested in the area of Kryoneri, east of Varybobi where the largest fire still burns, is being led before the prosecutor on suspicion of arson.

State security drew up a file charging arson in a forest, possession of drugs, and violation of the law on flares.

The man was found at Mantri in Kryoneri on Friday morning, riding a motorcycle without license plates in an area that is inaccessible to residents. Volunteer firefighters pointed him out to authorities because of a fire breaking out nearby without any discernible casue.

He was arrested by state security and told them he was in the area to help fight the fire. When his house was searched, police found matches, lighters, flammable material and walnut shells, which police said can be used to kindle a fire without leaving traces. They also found a small amount of unprocessed cannabis.

Security found out that he is involved in another two rekindles of the fire in Kryoneri, the first nearly half an hour after midnight on August 4 at the Kryoneri cemetery, and the second at 00:15 at the Mantri area ravine in the same town on Friday (today).

Efforts are continuing for a fourth day on Friday to put out fires throughout the country, that have damaged hundreds of homes in northern suburbs of Athens, Evia, the Peloponnese, and elsewhere. Firefighting forces, stretched thin by ground and air as fires kept breaking out, creating new and several fronts and rekindling, were aided by help from several countries in staff and airplanes.

Meanwhile, major roads have shut down and train services suspended.

Below are some of the ongoing fires in Greece as of Friday.

Residents of the coastal town of Limni Evias on Evia were evacuated by sea after a wildfire front burning in the area returned to the town on Friday evening.
Two days ago, residents watched the fire spread from the forested area in the north to the edge of the town. On Friday, the residents gathered at the town beach as the flames have made all nearby roads impassable.

On Friday, one fire front returned to the coastal town of Dafni, in the northwestern part, where it burnt a number of houses, the Fire Brigade said. The fire had approached Dafni several times the first time it broke out in the area. Firefighters who had been trapped in the area because the traffic between Limni and Agia Anna is closed off were safely removed, while the fire front was moving towards the Mourtia community.

The fire has different fronts – on the Aegean, or east side of the island, a front is moving to Mantoudi (evacuated, along with other villages) and surrounded Kechries village (also evacuated), the other has returned from Strofilia and Kirinthos back to Limni, while also threatening Mourtia, which is evacuated. Another, northern front is heading from Kalamoudi and Paleochori back to Rovies, which it burned through when the fires broke out two days ago. Firefighters are at the site.

The fire that broke out earlier in the Athens suburb of Ano Liossia is spreading toward Petroupoli suburb, aided by strong winds, the Fire Brigade said on Friday evening.
There is no danger to residential areas yet, but firefighters are struggling to put it out before day’s end, when air support has to stop. There are now 25 firefighters with 12 fire trucks, 2 airplanes and a helicopter operating there.

A forest fire is blazing through the area of Nemouta, west of the town and ancient site of Ancient Olympia, the Fire Brigade reported on Friday.

The village of Nemouta and the neighboring communities of Villia and Tsapareika in NW Peloponnese have all been evacuated.

The fire that broke out earlier on Friday at Cape Sounion has been put out, Mayor of Lavreotiki Dimitris Loukas told Athens-Macedonian News Agency (ANA-MPA).

The fire had started right across from the ancient Temple of Poseidon, noted Loukas.

Due to the quick response of all firefighters in the area and the efforts of civil protection, the fire was stopped before it could cross a ravine towards the town of Sounion and the national park that lies further out, he added.

The mayor also asserted that the cause of the fire was most likely arson, as it started next to a hotel where there is absolutely no flammable material.

Traffic on the Athens-Sounion highway has been restored.

Firefigthing forces and a helicopter are fighting a blaze to stop it before it enters the city of Gythion, on the eastern coast of the Peloponnese, Lakonia Region Vice-Governor Theodoros Veroutis told Athens-Macedonian News Agency (ANA-MPA) on Friday evening.

The official said that the fire approached the city on its northeastern side, and that the situation there is very difficult, as high winds have not subsided after sunset and the fire front is extensive.
Residents and tourists have left the area, he added.

Hardalias: Some 98 new fires break out in Greece in a day; 3 arson arrests on Friday

Greece faced a total 154 fires throughout the country on Friday, Deputy Civil Protection Minister for Crisis Management Nikos Hardalias said on Friday night, with 98 of those fires being new within the last 24 hours.

At a live briefing, Hardalias said that 64 fires are still burning. The most important ones, he said, were in Attica, Evia island, Ilia (including a new fire in Ancient Olympia), Messinia, Mani (the latter three in the Peloponnese) and Tolofona, Fokida, Fthiotida (all in Central Greece), as well as the island of Crete, and Grevena (Macedonia).

He said all available forces were taking part in firefighting efforts, and thanked all firefighters and volunteers working under very difficult and often risky conditions in unprecedented times, while he also expressed his sadness for the volunteer firefighter who lost his life at Ippokratios Politia on Friday.

The minister enumerated the firefighting forces, on the ground and by air, in each of the areas on fire. He said that in the Varybobi area, where a great fire started on Tuesday and spread from Mt. Parnitha to town in northern Attica as far as Lake Marathon reservoir, a total of 720 firefighters were operating, with 40 terrain teams and 215 fire trucks, along with over a dozen airplanes and helicopters, which must stop operations during the night.

The large Beriev water-dropping airplane sent by Russia is operating in Evia, he explained, where fires raced through villages and towns – sometimes several times over the last four days – and where at least 631 people had been evacuated by the time of his public address.

Countries sending firefighters included France, Cyprus, the Ukraine and Romania (arriving Saturday), while Croatia, Sweden, and Switzerland, as well as France and Cyprus, had or were sending airplanes and Super Puma helicopters.

Hardalias also said that the Fire Brigade had activated teams of arson investigators, who would work with local offices and police in Attica, Tolofon, Evia, Ilia and Messinia.

So far, three people have been arrested, in Fokida prefecture of Central Greece, Attica and Kalamata. The Attica suspect was held for intention to set fire and in Kalamata for repeatedly having set fires, with three of them confirmed.

“We are facing a much harder night tonight,” he concluded