Fires continue to burn out of control in Evia, villages are evacuated, “apocalyptic” scenes 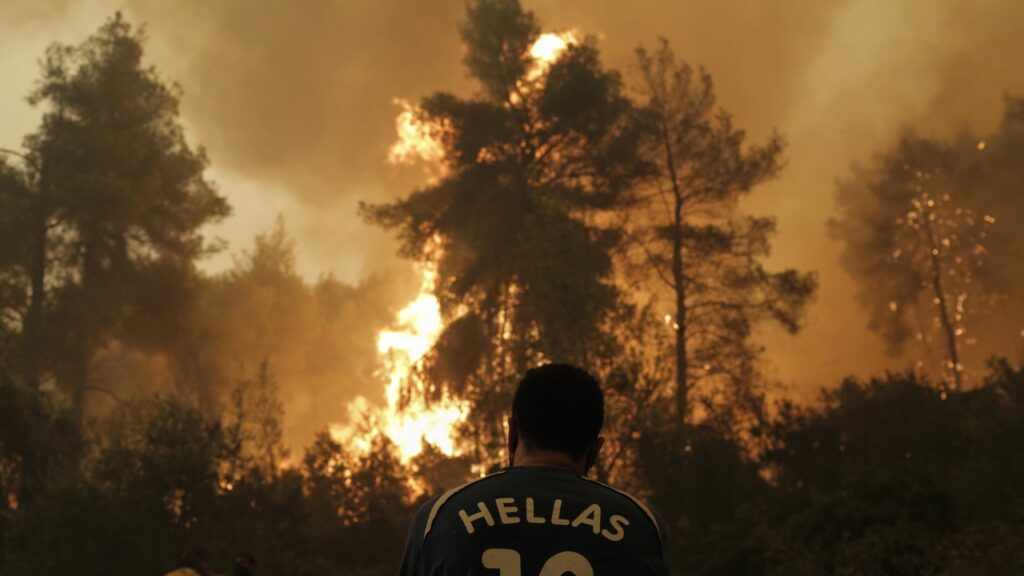 A local resident wearing Greece's national football team t-shirt looks at approaching flames, during a wildfire at the village of Pefki in the Evia, Greece, 08 August 2021 Photo: AAP via EPA/KOSTAS TSIRONIS

Multiple fires have been dangerously blazing across Greece since Tuesday, with many of them out of control.

There were more than 150 fires burning across Greece on Sunday, fuelled by one of the worst heatwaves in recent times.

Much of the focus is currently on Evia, Greece’s second-largest island. Tourists in the area have described scenes as “apocalyptic” and a “horror movie”.

Three evacuated villages in northern Evia island have been engulfed in flames in a fire on the island which has been blazing out of control for several days. Authorities called for further evacuations on Sunday as the fire blazed across multiple fronts.

READ MORE: Antetokounmpo offers assistance to victims of the fires in Athens

In Evia, the fire has reached Galatsona, Ellinika and Agriovotano villages, while Gouves, Artemisio, Kastri, Vouliki and Pefki were called to evacuate through the 112 European emergency messaging system. Residents have been advised to head toward Istiea, further north.

Angelos Missirlis, Deputy Mayor of Istiea-Edipsos said that the fronts were endless.

“All villages are a single fire front. At places the fires expands, at other places it rekindles. This fire cannot be fought by heavy machinery” opening buffer zones, he said, “we need airborne forces immediately.”

READ MORE: Greece on fire: scenes of destruction as 98 new fires break out

The Galatsona, Geraki and Gouves front is over 8 km long and continues to expand east (on the Aegean side) to Agriovotano and to Avgaria in the west, facing the mainland.

Port Authority (PA) officials and the Greek Rescue Team continued checking beaches at Evia even after evacuations in case there were other evacuees left behind. According to the authority, 23 people were evacuated from various beaches, and were transported to Pefki, the northernmost part of the island away from the fires.

As Athens-Macedonian News Agency reported earlier, three PA ships, two ships and two vessels of the Hellenic Navy, ferries, private and fishing vessels are on standby in the western shore of Evia.

The villages of Milia, Agdines and Tsapournia are facing rekindled fires, while at the southern section the fire at Troupi has rekindled.

A PZL firefighting airplane crashed during operations to put out a fire on Zakynthos island on Sunday, but the pilot survived.

According to the Fire Brigade, the pilot of the airplane was picked up by other firefighters on the Ionian island.

The aircraft was one of a pair dispatched to assist firefighters in the Lagopodo-Macherado area, where 24 firefighters are operating with seven fire trucks.

On Friday, the day of the big fire which raged in Varybombi, destroying houses, arson devices were found in the region by police.

An investigation is underway.