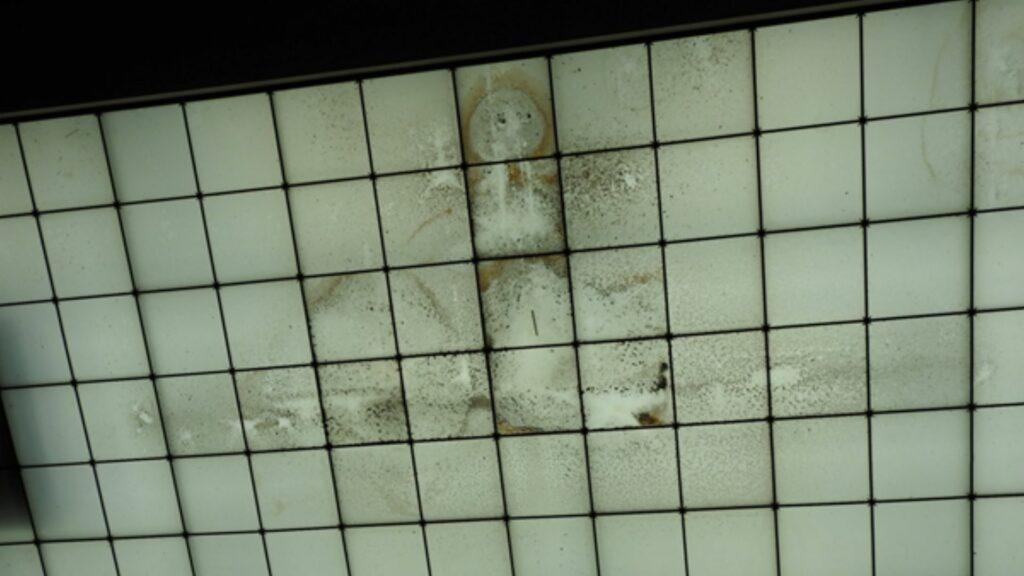 On my first visit to the British Museum (BM) Parthenon Sculptures gallery in 2015, I was surprised to see this strange pattern on the skylight. London is not a dusty place, so I was puzzled that the skylight had not been cleaned.

To my surprise the skylight was still filthy. This set off an ‘alarm’. I wondered if this 79-year-old skylight was too fragile to clean, indeed whether the roof of the gallery needed extensive maintenance.

The answer came quickly, in December 2018, when the skylight began leaking after heavy rainfall in the London.

Witnesses reported seeing water the dripping just centimetres away from the west pediment figure of Iris. Clearly this was not a problem that was to be easily dismissed, it seemed something very serious was taking place.

In the January of 2019, Yannis Andritsopoulos, UK Correspondent for Greek newspaper Ta Nea interviewed Dr Hartwig Fischer, the Director of the British Museum and asked about the December leak. Dr Fisher’s reply was: “We had a tiny leak in one area of the roof in the Parthenon Sculptures’ galleries. A small quantity of rain entered the gallery, but did not touch any of the Sculptures and this was fixed right away.

“When on 18 June this year parts of England experienced one of the wettest periods on record, flooding was extensive, and in some places a month’s rain fell in a 24-hour period. The British Committee for the Reunification of the Parthenon Marbles (BCRPM) with their Chair Dame Janet Suzman were outside the BM to celebrate the 12th anniversary of the Acropolis Museum and to ask the BM to come clean handing out a flyer jointly produced by our two committees. Janet Susman commented:

“It was good to catch up with visitors as they were arriving for their booked visiting slot but more so with those leaving, especially those that could not access the Greek galleries. We were all most concerned given the museum had been closed for sometime during Covid19 lockdown. And on enquiring how long the work would take, the reply from BM staff “not too long”.

They confirmed that while the museum was now open, reopening of the Greek rooms was postponed “until further notice”. After months of lockdown, this was most concerning. They brushed aside enquires about the reason for this closure merely citing maintenance in some parts of the museum. When asked directly about leaking the response was, “There is no report of this, there is scheduled maintenance in parts of the museum.” Again, on 25 July, heavy rains fell over London, but the British Museum remained silent.

Now the truth has leaked out. Writing for The Art Newspaper in an article, Is it raining again in the British Museum’s Parthenon gallery? Cristina Ruizz wrote, “A leaking roof has delayed the reopening of seven galleries of Greek art.”

Ruizz continued, “Water seeping into the British Museum’s Greek galleries from a leaky roof has delayed their reopening.

“Seven galleries of Greek art, including the museum’s display of Parthenon sculptures, were expected to reopen to the public at the end of July following a seven-month closure, museum sources say.

“But this was pushed back after heavy rainfall on 25 July caused flooding in central London and led to water leaking into one of the museum’s Greek galleries, sources say.”

A British Museum spokeswoman confirmed that “there was some water ingress in one of the [Greek] galleries” in July but said she could not identify the specific gallery. She also could not say when the displays might reopen. The International Association for the Reunification of the Parthenon Sculptures (IARPS) Chair Dr Kris Tytgat was quick to send our this comment from Greece’s Culture and Sports Minister Lina Mendoni:

“This is not the first time that photographs have been published that reveal that the conditions for exhibiting the Parthenon Sculptures at the British Museum are not only inappropriate, but also offensive to dangerous, she wrote. In September 2019, when similar photos were published, we had stressed that these images fully strengthen the legal, ongoing and non-negotiable request of Greece for the reunification of the Sculptures. The Sculptures of the Parthenon, the top monument of Western Civilization, must return to their homeland, stop being cut off from the monument to which they belong and from which they were violently detached, and be exposed again to the Attic light.”

Dame Janet Suzman issued a statement broadcast on ERT News on Friday 13th: “We have noticed that since our celebration of the Acropolis Museum’s 12th anniversary, Sunday 20 June 2021, outside the BM with our call for the BM to ‘come clean’ and tell the story of why the Parthenon Marbles are still divided, mainly between two great museums… The BM’s Room 18, was closed then and remains closed to visitors. What is going on? Are they trying to Anglicise the sculptures here in London by covering them in damp? BCRPM is a little bit concerned and add that these sculptures would be much happier bathed by the Attica light.”

More to the problem than leaks

The concerns are not just about the leaks or the damp. In summer with weeks of higher temperatures, the fire exit doors are left open, and in winter large blow heaters are positioned in Room 18.

As a world-class museum, the BM needs to address the climate controls of their galleries, simply wanting to display all cultures under one roof takes more than stating the ownership of artefacts removed when the countries of origin had no voice.

It was the late Eddie O’Hara, Chair BCRPM, that first raised the problem of the roof and in that summer of 2015 when we met at the BM. It was the late William St Clair who introduced Eddie to Sir Richard Lambert then Chair of the BM Board of Trustees .

We are in daily contact with the BCRPM and will join them in monitoring this situation.