‘No other option’: VIC officials grilled over exit from lockdown timing

Neos Kosmos asked the Victorian authorities about the key factor threatening Melbourne’s reopening. And whether a lockdown extension can stop rules’ breaching driven by lockdown fatigue 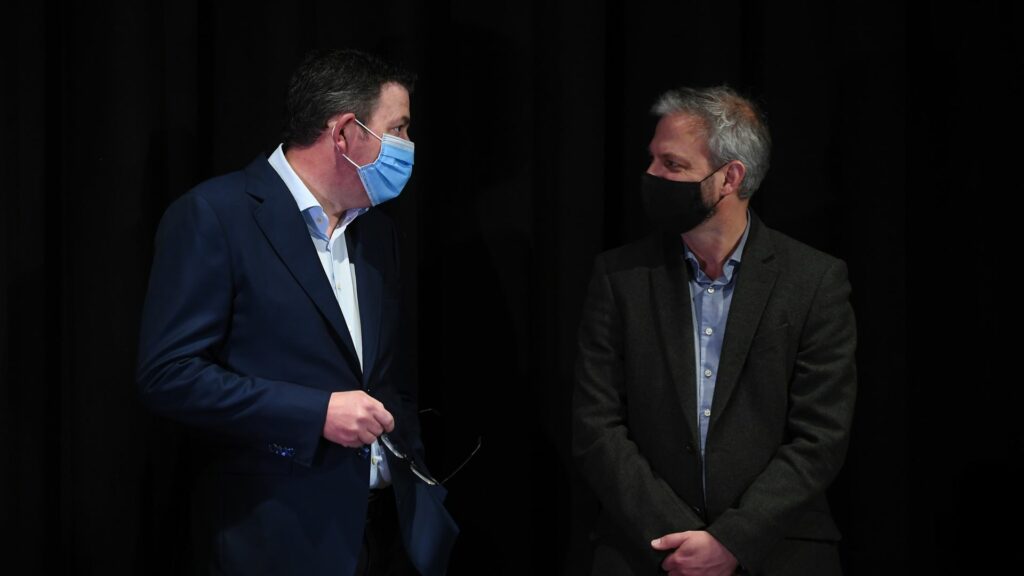 Victorian Premier Daniel Andrews (left) and Victorian Chief Health Officer, Brett Sutton speak to each other during a press conference in Melbourne, Tuesday, August 17, 2021. Melbourne’s lockdown has been extended by two weeks and a night curfew is reimposed in an effort to stamp out the state’s latest coronavirus outbreak. Photo: AAP/James Ross

Finding it hard to digest extension no.2 of lockdown no.6 in Melbourne?

Victoria’s public health team states well aware of the issue. But they say “we can’t take a different path and expect it will not put us in supreme risk”.

“No one argues with the point we are fed to our back teeth being stuck in our homes and not being able to interact with our loved ones and our friends and family. But I think Victorians understand what’s at stake here and I think they are reflecting on how it could go and are not wanting to go that place.”

Melburnians woke to tougher rules on Tuesday, including a reimposed night curfew.

Asked by Neos Kosmos about alternative next steps in case the lockdown extension doesn’t pay off in two weeks’ time, Prof Sutton said the team is confident “that the additional measures will have an impact”.

“I do have confidence that it’s going to be a driver that will help reduce transmission.”

Checked exposure sites lately? More have been published online at https://t.co/xojLvnrdjA including: pic.twitter.com/qMgDNtiHaV

Meanwhile, the Victorian Premier reiterated that reducing transmission as much as possible remains the government’s aim in line with national strategy.

“We’re not going to be indefinitely locked down. But we’ve got to do our very best to not be where Sydney is at the moment.

“[…]We don’t have the hospitalisations that NSW have, we don’t have the tragic deaths they have to deal with at the moment, but we have too many cases to open up. That’s why we got to drive this down as low as we can.”

And he said that in absence of sufficient vaccination rates, the lockdown was a one-way street.

Victoria recorded 24 new local COVID-19 cases on Tuesday, 10 of whom were in the community while infectious and with three of the total unlinked to known clusters.

The steady daily tally of infections unlinked to known chains of transmission – aka mystery cases – was a key reason cited on Monday, when the lockdown extension until at least 2 September was announced.

And gatherings in breach of public health rules appear to have driven much of the latest transmission, without taking into account potential new clusters following a weekend of parks, and suburban streets packed with people in groups.

The Peacock was closed and was not serving alcohol to the throngs of selfish youths who broke life-saving #COVID19 restrictions on Sunday to party in High St #Northcote to an attention-seeking DJ. Graffitiing The Peacock is unfairly targeting a struggling business. pic.twitter.com/8Mwo4HZZF1

Meanwhile another two unlawful private gatherings in homes were identified by police on Monday night.

Possible transmission at a playground is under investigation, while the infamous St Kilda engagement party – expected to cost attendees $350,000 in fines – has already had five positive cases linked and potentially sparked unlinked transmission in the area, the Department of Health deputy secretary Kate Matson confirmed.

Asked by Neos Kosmos whether it is realistic for the state to have zero mystery cases in two weeks’ time, Ms Matson pointed out to the urgency for more testing.

“When we know about a cluster we can get on top of it[…] We know the attack rate with household contacts is really high with Delta so that’s again the call for testing. Once we know about it we will use all the tools in our toolkit to test, trace and isolate and get on top of it. That’s how we reduce the number of mystery cases.”

When the question of unlinked cases’ tally expected by September was directed at Daniel Andrews, the Victorian Premier also steered away from concrete targets.

A “zero risk outcome” is not the goal, he said. But he did stress it’s necessary to not have further new ones, on top of existing mystery cases.

“And then beyond that, have the coronavirus detectives do their work and drive as many of those mystery cases as possible to the ground, solve those puzzles and then we can move forward from there.”

“It will always be preferable to have every case linked. But it may well be that, despite our best efforts, despite sewerage testing, despite contact tracing and with the passage of time, a case that is quite a historic case, but is not a mystery that’s been solved, you would look at that and say ‘can we open up now?'”