Mount Athos, the Autonomous Monastic Republic of the Holy Mountain 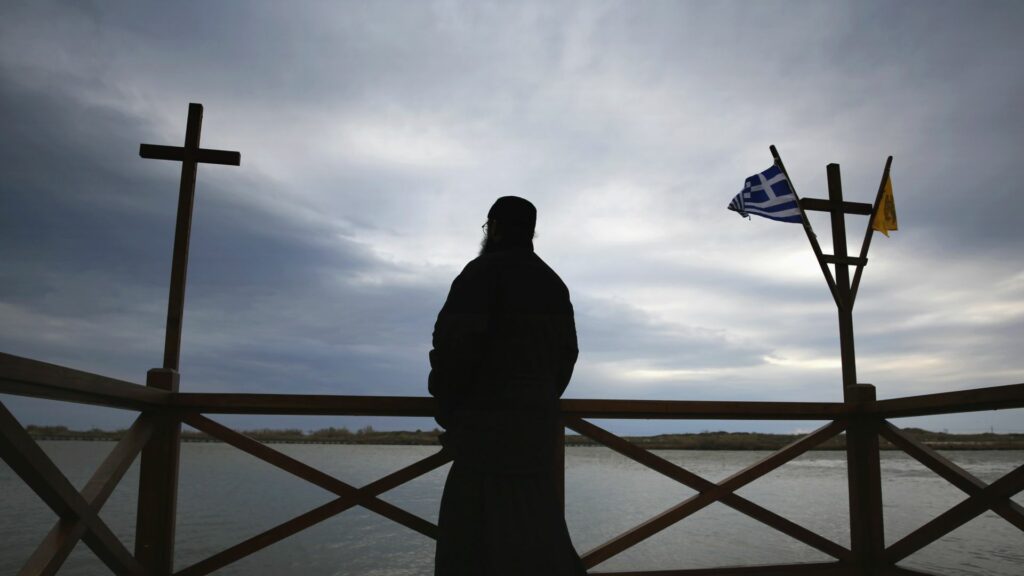 A Greek Orthodox monk enjoys the serenity of nature on a balcony by Saint Nicolas Church in Vistonida Lake at Porto Lagos in northern Greece. Photo: AAP via Reuters/Yannis Behrakis

On the surface it may appear as though a mini-Byzantium exists on 336 km2 of the Chalcidice in Greece. Byzantium of course was ruled by an emperor who was meant to be God’s ruler on earth! Unlike Byzantium, this is a peaceful region that is totally inhabited by monks or those with a commitment to the Greek-Eastern Orthodox faith.

The Holy Mountain (Άθως or Άγιον Όρος) was officially proclaimed as an autonomous region on 3 October, 1913. Most of us know the area as Mount Athos but few of us know that the region is an autonomous Hellenic republic – the third republic on the planet to use Greek as its official language.

Athos is apparently the ancient Greek name, from mythology, for one of the gigantes who threw a massive stone at Poseidon which landed at the tip of Makedonia, hence creating the peninsular.

The Blessed Virgin Mary landed here when her ship sailed off course in the first century AD. Sensing the spirituality of the region, she gave her blessing to the area as special garden. Greek monks commenced arriving by the fourth century, co-existing with remaining pagan temples. The latter gradually dwindling in numbers as Constantinople clamped down on pagans. When Byzantine Africa was conquered by the end of the 600s, many monks found their way here.

The area has more or less coordinated its own affairs throughout history, including during the Ottoman era, and the Byzantine period before that. Emperor Alexios I Komnenos in 1095 proclaimed their “sovereignty thereon shall remain intact.” The capital town and administrative centre of the Holy Mountain as it is also referred to by Greeks, is Karyes. The capital is home to a governor as the representative of Greece.

The president (Protos) of the monastic community is based in Karyes, elected by representatives of the monasteries. In 1283, during Byzantine times, Latin Crusaders attacked Mount Athos. Victims included the Protos and scores of defenceless monks. All were honoured as martyrs. It is just one reason for the traditional reluctance of Athos to embrace Catholic counterparts. Killing defenceless monks has no justification. How could anyone take the life of those who seek peace and spirituality? Placing this in context of issues between the Latins and Greeks; over the proceeding century there had been battles and massacres between the two sides across Europe.

The descendants of the Latin Crusaders, the Allies (of World War I) briefly considered occupying Athos in 1915 to launch counterattack measures against the Ottomans; they surprisingly printed stamps for postage issuing! The design of the stamps was interesting as it included a double headed eagle and a picture of the Virgin Mary and baby Jesus. In addition, inscriptions were made in Greek, Russian and English. Fortunately, the monks were not disturbed and the Allies went elsewhere.

The region is made up of twenty monastic areas with a population of 2000 monks. There has been a steady increase in population since the 1970s and most are well educated. Athos technically resides under the jurisdiction of the Patriarch of the Greek Orthodox Church, Constantinople (Istanbul). Despite this unique situation, the European Union ratified their admission with Greece in 1981.

Whilst Greek is the main language, there are monks who have come from Russia, Romania, Serbia and Bulgaria who do not speak Greek as their first language.

Russia has donated generously to the monks over the years and at one stage attempted to violently wrestle with Greece and the monks over who should have a semblance of control.

The Bolshevik revolution in 1917 ended that issue.

READ MORE: How many countries in the world have Greek as their official language?

Athos has another place in history for it is the location of Mardonius losing 300 ships that belonged to King Darius. Maybe God knew something back then about stopping bad guys from entering Greece! A Spartan fleet of fifty was similarly shipwrecked in 411 BC.

Another tragedy occurred in 2014, and one that has not had a final resolution. A helicopter crash off the mountain into the Aegean resulted in the death of 17 people including the Patriarch of Alexandria, Peter VII. At the time of writing there remains no indication as to what actually caused the crash in such mysterious circumstances.

The Holy mountain appeals to pilgrims and each one has a story to tell, be it a spiritual connection or something unique.

My friend Achilles Theodoridis of Iliad Homes, told me when he visited in 2008, about his experience. “I came across a tradesman who was building a proskinitirio and he couldn’t finish the roof on it, hence I helped him complete it and it still stands today at the end of the wharf at Thohiario Monastery. We used rock bricks and shale tiles; it can be seen from the ferry when passing by.”

Another person who had an enlightened experience, is the author of historical fiction Olympia: The Birth of the Games, John Martino. “Despite having an Italian surname, I am half-Greek. After completing a six-week novel writing stint in Athens early 2020, I travelled by car first through a place bizarrely named after my Italian surname and then through to Mount Athos.” John pointed out to me that Athos had banned women from visiting and also once hosted “the filming of a James Bond movie. I was moved by its deeply spiritual and skyward-seeking collection of precariously perched monasteries.”

The region is at an elevation of around 2000 metres, allowing it to keep a distance from the outside world. Arrivals are generally by boat as the terrain is rather rugged and dangerous for most people to cross. Women are banned from entering as it remains a male only religious institution. For those interested in visiting, 100 Orthodox and 10 non-Orthodox are allowed during non-Covid periods and you must apply for a permit called a Diamonitirion, months in advance. Speaking of times, the monks use the Julian calendar, which is 13 days behind the Gregorian version.
Whether you are on a Julian or Gregorian calendar, or even on Greek-time, Mount Athos is worth a visit, if you are a male.

Billy Cotsis is the author of 1453: Constantinople & the Immortal Rulers