Although Dimitris and Vasiliki grew up in nearby villages in Prespes, they met for the first time in Poland in the early 50s, fell in love eventually came to celebrate 66 years of marriage 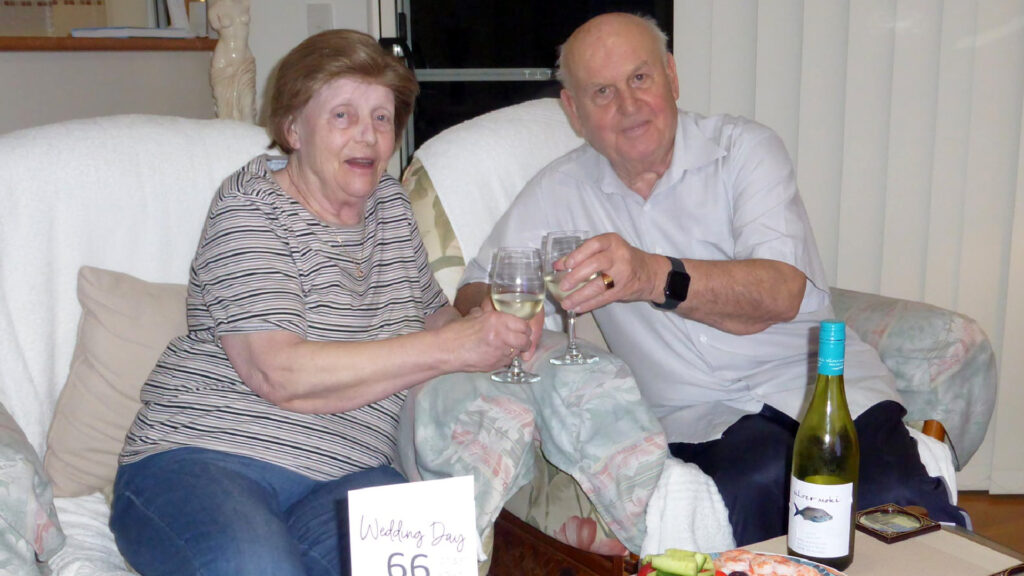 Mrs and Mr Papadopoulos in Queensland where on 15 August, they celebrated their 66th wedding anniversary, away from their family due to the lockdowns Photo: Supplied

Two children of the Greek Civil War found themselves falling in love, far from their motherland.

As a teenager Dimitris Papadopoulos was uprooted due to the Civil War in the late 40s from the village of Psarades in Prespa. His first stop was Albania and then to Poland.

He remembers difficult times, trying to survive in the midst of bombings and famine, while his family members were scattered throughout Europe.

At the same time under the same difficult conditions, a young girl from the village of Laimos in Prespa, Vasiliki Georgiadou, was also taking the road of refuge.

The two first met in 1951 in Kroscienko, near the border of Poland and the then Soviet Union. From the first moment he saw Vasiliki, Dimitris says he was “enchanted by her blue eyes”.

“But she avoided me. I confessed my love to a friend of mine, George, who was from the same village as Vasiliki,” he told Neos Kosmos.

READ MORE: Celebrating 58 years of marriage… When a proxy turns into a love story

However, instead of helping a young Mr Papadopoulos in his courting venture, the fellow villagers did not let him approach her.

During the school holidays he went to visit his father, also a refugee, who after the Civil War lived in Zgorzelec, Poland. He lived in some apartments, which during World War II were barracks of the German army.

In the next apartment lived a woman from the village of Kallithea, Prespa, with whom Mr Papadopoulos had traveled to Poland. Mr Papadopoulos also went to the same school with the woman’s daughter, Jordana. Talking from balcony to balcony, he asked where Jordana was. Theia replied that she was there, together with Vasiliki, the daughter of her cousin George.

READ MORE: Love conquers lockdown: Brides and grooms whose passion was greater than the pandemic

The young man swallowed his tongue. “Wouldn’t it be ironic to be the same Vasiliki that avoids me?” he thought. Jordana went out onto the balcony, Vassiliki followed, sitting herself in a chair without looking at him. Her cheeks were flushed, but she was calm in her conversations.

Luckily for him one of his cousins, Alexandra, went to the same school as Vasiliki. He asked Alexandra to take her classmate with her to the park. The next afternoon he waited for them impatiently.

“They sat on a bench as I approached them, I greeted them and sat next to Vasiliki,” Mr Papadopoulos recalls.

At some point it was just the two of them left sitting on that bench. It took a few minutes for the ice to break but they eventually got to talking about their lives and studies. They had both decided to get a diploma. She in the textile Industry, he as a radio communication engineer.

After another few more secret meetings in the park, they decided that they would always stay in contact during their studies.

“We promised to keep in touch by writing letters as often as possible,” Mr Papadopoulos said.

After they graduated, they got jobs in different cities that were 400 kilometres apart. Distance did not stand in the way of their love and they decided to get married on 15 August, 1955.

Years later, Mr and Mrs Papadopoulos looked to a better life for their family and so they took their two children and sailed on the Marconi ship from Genoa, Italy on 3 November and arrived in Melbourne on 24 November, 1964.

On 15 August they celebrated their 66th wedding anniversary but could not celebrate with their loved ones as they were not able to return to Melbourne after heading over to Queensland for a holiday due to lockdown measures.

“The family we created is the most valuable and wonderful thing we have done in our lives,” Mrs Papadopoulos said.

“We are very happy. We have our children, our grandchildren, our great-grandchildren… Even now we say that we had a difficult time, but we are lucky and blessed. There were times when we did not know what would happen. We were displaced children in Poland then. And now we have made it to this point in life…”

“In life, everyone does the best they can,” Mr Papadopoulos said.

Do you know any Greek-Australians who have been married for more than 55 years? We would like to meet them and share their stories with our readers. Write to us at editor@neoskosmos.com.au or call us at (03) 9482 4433