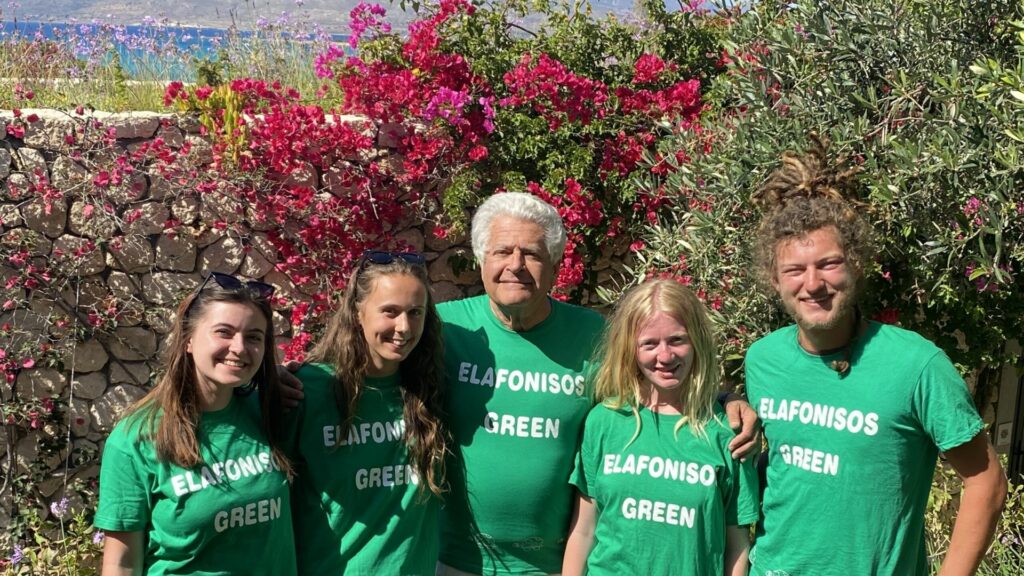 Elafonisos Eco CEO Enrico Toja, centre, with some of the young French scout volunteers who spent the summer cleaning up the beaches and monitored turtle nests on the island - among other duties. Photo: Supplied

Elafonisos is reputed to have two of the best beaches in Greece and tourists have come in their droves to the island to spend the day soaking up the sun and sea and leaving for the next stop on their itinerary. At the height of the tourist season, between July and August, over 3,000 visitors a day swamp the island in their 1,600 cars.

One tourist who came to the island half a century ago, fell in love with it and decided to stay was Enrico Toja.

The former managing director of Johnson&Johnson Consumer Group in Italy and a vice-president for Europe, now 78, is an energetic, well-travelled former executive who cannot explain what drew him to the island to set up a home and become part of the island’s life as a founder member and current president of the environmental group, the Ecological Association of Elafonisos (or Elafonisos Eco for short).

“When you are in love with a beautiful woman, you cannot explain why you love her, you just do. It is the same for Elafonisos. I like the Greek mentality, we (Italians and Greeks) are something together, it is in the blood,” Mr Toja told Neos Kosmos. He is a current board member of Centromarca (the Italian Association of Branded Products) and of the AIM (European Brands Association)

While he may also have homes in Turin, Paris and loves to ski in the Alps, he returns to the island several times a year spending up to four months annually.

“I come in November for the olive oil, then for the Orthodox Easter and in May to prepare for the summer season,” he said.

Those preparations involve organising environmental symposiums with other islands to share information on each other’s conservation efforts. As well as co-ordinating cleaning of the beaches and monitoring the nesting sites of the caretta-caretta (loggerhead) sea turtles and of the island’s unique flora that includes the Kedros juniper tree (found elsewehere only on Crete and Lebanon) and the saponaria flower.

Most recently, the organisation hosted 34 young French scout volunteers who from June to the end of August helped to clean up the island’s famous beaches. That they collected more than 1,000 black bags of waste is evidence of the strain mass tourism places on a small island’s resources and environment.

READ MORE: Pavlopetri, the oldest submerged city in the world

“Unfortunately, a lot of tourists (mostly Greeks and Italians, followed by French, German and Swiss) come in the morning, spend time at the beaches and leave in the evening. They also leave behind a lot of garbage, especially plastic water bottles.

“In March, we put out a video calling for volunteers and only the young French scouts answered our request and no one else. We were very happy that they came.”

At present there is no waste-management plan in place, although Mr Toja said the Peloponissos Region was looking at setting up large facilities to process the plastic.

In the meantime, following up on the example set on Kythnos island in the Cyclades, the organisation has donated to the island that dispenses filtered island water at a cost of 5c a litre.

“We encourage people to bring their own glass bottles. It is much cheaper than buying bottled water from the shops where a plastic bottle of water costs 30c a litre. It is a saving, but it also reduces the use of plastic on the island. The kiosk can produce daily 1,000 litres of very good, drinkable water.”

Dispensing with plastic waste has developed into a major headache in the Mediterranean countries. Plastic water bottles are either binned or thrown aside to end up in the sea where they break down and are ingested by the fish. Often the bottles are burned, adding to the pollution problems they already cause.

“Australia has waste management but Greece and Italy still have a long way to go for that but we are starting on that process.”

“A big waste-management plan is being considered by the Peloponissos (administrative) region, but will take a while before it is implemented,” Mr Toja said.

“We put in contact the not-for-profits Zero Waste Greece and Greening the Island (GTI) to work with the local authorities to help the Elafonisiotes to reduce the use of plastic bottles. They set up a food-waste programme and train the students to care more for nature.”

He said that a more sustainable option for the island would be to attract tourists who wanted to stay for longer to enjoy the island’s cultural life it had to offer and who appreciated its unique natural attractions.”

“We have been lucky not to have big construction projects, so the island has become a diamond and we want to improve its quality.”

The symposiums that Elafonisos Eco has hosted over the years have shown that many other Greek islands are following on a similar course. Islands like Astyplalea, Tylos and Lipsi reflect a similar mindset with local councils that have a long-term vision for their islands.

“Our role is to be a messenger to protect the island and its natural beauty. It takes time, but we are confident that we can do it,” Mr Toja said.