Yiannina’s castle denizen was a legend in his own time

Nakas was a real-life Huckleberry Finn who called the hidden places of Yiannina’s old castle his home. 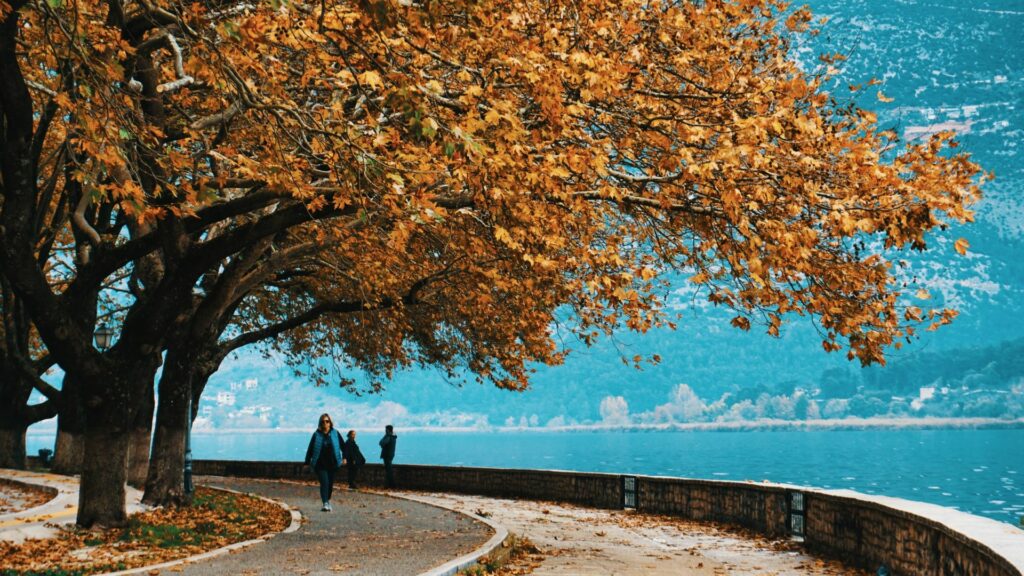 Where once the waters of Lake Pamvotis lapped close to cliffs below Yiannina’s Castro, the city fathers built a road and walkway lined with Platanos (Plane) trees. The works buried forever Naka’s hidden stash from a jewellery shop heist. Phot: Nikos Kavvadas/Unsplash

“If you are not careful, you will grow up like Naka over there,” my grandmother said as we walked in the cold, sodden and dark winter night in Yiannina. As she spoke, she nodded towards the figure of a man sitting the glow of a fire he had lit under the shelter of an arch of the Kastro, the town’s old castle.

It was the closest I was ever to come to this Naka, who stood as warning for all kids who lived in the Kastro.

I heard he lived within the castle walls and that he knew every nook and cranny into which he could disappear if he wanted to avoid detection.

And there were plenty of escapes in the legend that was Naka.

My dad, Christos, knew him when they were children in the second world war and even then, Naka seemed to have no fixed abode. He was a Huckleberry Finn figure to the neighbourhood Tom Sawyers.

Dad told me the story of how the neighbourhood kids had gathered one hot summer day to loaf beside a dry well shaded by the Fethiye mosque and Ali Pasha’s grave. The building dominated the heights of the inner castle and offered spectacular views of Lake Pamvrotis and the mountains beyond.

Bored by the heat and unimpressed by the view, it was not long before the kids started chucking stones down the old well.

Until a voice boomed at them from the dark depths: “Stop it, stop throwing those stones.”

Frightened at first by the echo from the depths, the kids realised they knew that voice.

And sure enough, a minute later out popped Naka.

“You think I am crazy, but the coolest place in Yiannina today, is down that well,” he said by way of explanation. And he was right, Dad said. There was method to his eccentricities.

READ MORE: Children’s games we played on our street in Yiannina’s old castle

Another story was of how Naka, who was not famed for his love of regular work, was dragooned by the Germans to saw logs for some misdemeanour. He shared the job with another unfortunate while a guard patrolled the area.

While the soldier was in sight, Naka and his crew mate worked as though their lives depended on it. Once the guard was out of view, Naka downed the saw and lay down to rest until the guard was on his return round.

For all the frantic activity that he noticed, the guard realised that there actually was very little to show for his prisoners’ efforts. He quietly swung back unnoticed to see Naka and friend taking their rest.

The guard stormed up to youngster and slapped him hard across the face. It was not behaviour that Naka was prepared to tolerate. He retaliated with a blow of his own that knocked the guard out cold, and then Nakas legged it into the dark recesses of the castle.

No German or Italian patrol would ever find him again and they tried.

After the war, Naka was involved in the jewellery shop heist. He took his share and hid it on the shores of Lake Pamvotis. He was eventually caught but would not tell the police where the loot lay, figuring that staying in prison for two years was worth it once he got out and sold the loot.

It was what sustained him in prison but when he got out, things had changed drastically. where the shore used to lap to the very edge of the Kastro walls, the city fathers had constructed a road and walkway lined with Platanos (Plane) trees that line the shore to this day.

Naka was never to find the jewellery he had hidden so well and was now covered by tons of tar concrete and soil.

He continued to call the castle walls his home even when the army took over the inner castle during the dictatorship years in the 1960s, when I saw him as a child.

When Dad returned to Yiannina on a visit many years later, Naka knew him straight away.

“How you doing, Christo? Why have so many of you left? What is wrong with Yiannina?” he asked.

My dad could not really answer him. He said Naka had relatives in America who wanted to bring him over, but he had refused. Come rain or shine, the Kastro was Naka’s home.

READ MORE: The nameless island of Ioannina at Pamvotida Lake