An inspiring tribute to the early Greek migrants was published recently in the newspaper The Australian, in which these early pioneers are described as the “miracle migrants” due to their longevity rates – not only in Australia but across the world.

Studies show that these first-generation Greeks who settled in Australia in the post-war years, have around 35 per cent lower mortality rate than locally born Australians and other migrant groups.

Though their lives have been hard in so many ways, they settled and found happiness in their new home, holding on to their traditions and customs in a way, that as it turns out, played a decisive role in extending their lives, according to research.

Many replicated the village life they left behind, planting in their backyard vegetables and fruit, cooking their traditional meals and enjoying their produce seasonally.

This seems to be where the secret of their longevity lies. Eating healthy and organic produce from a garden they tend and care for, connects them to rituals that bestow upon them a full and happy life. As Cameron Stewart says in his feature, these original Greek Australians “could teach the rest of the country a thing or two about the secret to a long, happy and healthy life.”

Mr Stewart spent some of his childhood years in the epicentre of Melbourne’s Greek community, Richmond, hanging out with Greek friends, as he discovered and embraced the culture and habits of his neighbours.

In his article he quizzed the members of the Greek migrant population, about the meaning of life, about their customs and habits, uncovering what they believe has contributed to a life well lived, and an optimism that doesn’t seem to falter, even under the current bleakness of living in lockdown.

“It’s a wonderful day to be alive,” 84-year-old Greek migrant Theo Zafirakos told Mr Stewart, as he sits in his sun-drenched Melbourne backyard with his wife Helen picking vegetables from their garden for their evening meal.

“We enjoy every day,” Mr Zafirakos told the Australian. “We are still healthy, we grow our own vegetables and we eat Greek food always – the Mediterranean diet. We keep active each day with jobs and we laugh and enjoy family life.”

His 75-year-old wife Helen, said the reason for their well-being and long life is olive oil, as she recalls that when they first arrived, Australians always used butter. She added, that staying positive is also important. “Laughing is the most important medicine,” she said. 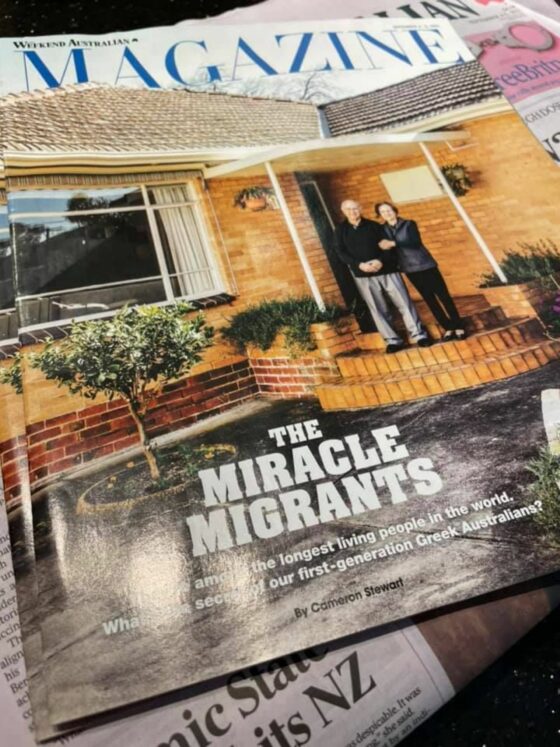 Jim and Georgia Stratos stood in front of their home for the front page picture of this feature.

His wife Georgia added, “Everything is Greek in here. We talk Greek, we eat Greek, the music is Greek, we dance Greek.”

Yiannoula Darmos, 94, told Neos Kosmos that when she came to Australia she wanted to keep the Greek way of life.

“Whatever I did in Greece I did here,” she said.

Her daughter, Eleni, agrees that “the Greeks who came here were more Greek than those in Greece.”

She describes how every family celebration always revolved around food, a tradition and a way of life she is increasingly embracing as she grows older. “When I was growing up I tried to be less Greek but I am now more Greek than I have ever been,” she says.

READ MORE: Early Greek Australians: A glimpse into the Easters of our past

Mr Stewart suggests that “Part of this recipe for a longer, healthier life, according to these first-generation Greeks, is that the family must eat the evening meal together at the table. They are horrified at the habit many Australians have of eating dinner while they watch TV. What’s the point of good food if you can’t eat it while talking with others, they say.”

The feature includes the interesting findings of Greek Australian dietician Dr Tania Thodis, who has been looking into the mystery to this population’s longevity, focusing more closely on those Greek migrants originating from the islands.

Dr Thodis had shared the interesting data she collected from her study that was completed in 2019 with Neos Kosmos when it had been first released. Her method of investigation into the Greek Mediterranean diet pattern and successful ageing followed the Mediterranean Islands Study’s (MEDIS).

“We knew that the islanders in Greece were doing better than their mainland counterparts because they tend to keep more to tradition…we knew our Greeks here were very traditional and thought let’s find out if that has any role to play,” Dr Thodis said.

The Australian study delved into exercise and eating habits of Greek island born migrants of Australia over the age of 65 and found over 75 per cent of them maintained a garden growing fruits and vegetables.

As a result of these Greek-Australian elderly migrants maintaining their own gardens, the research showed they had a tendency to consume more plant based produce.

“Over three quarters of the participants with a garden, were eating over 50 per cent of their produce…What it suggests is that they eat a lot more vegetables than the Australian born population,” Dr Thodis said.

“They’re getting outside, they’re exercising, they’re out in the sunshine, they are sharing their fruits and veggies with friends and family so there’s a social aspect to it. We suspect that helps reduce that isolation that the Australian born population of elderly people suffer,” Dr Thodis said.

Dietitian and academic Dr Catherine Itsiopolous had a hand in guiding Dr Thodis during her study and has done her own extensive research in the area of the Mediterranean diet. She explains that how we cook the produce is just as important as including it in the diet.