Hair and the Ancient Greeks: Secrets of their strength 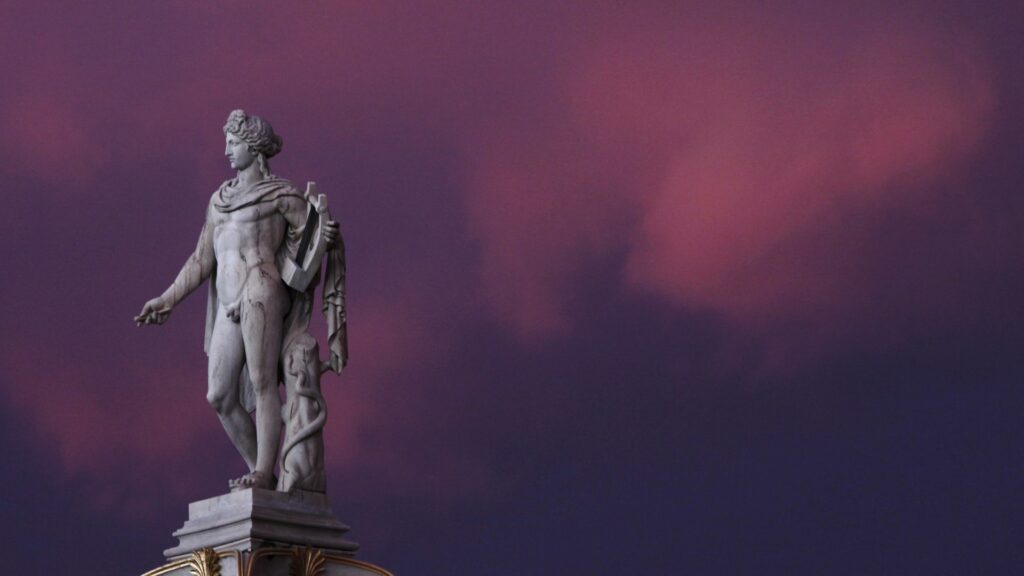 A 19th century marble statue of the ancient Greek god of light and music Apollo stands on a column against a purple sky. Photo: AAP via AP Photo/Petros Giannakouris

I have a confession to make. All my life I have dreamed of having long hair, a felicitous state of hirsuteness that eludes me, since I appear to be biologically incapable of sprouting anything more than the most rudimentary skin cover, let along the long luxurious locks of my most secret fantasies.

In my youth, I would gaze upon the relief carvings of the lion killing Assyrian kings such as Sennacherib and Ashurbanipal and marvel at their innate poise and style: no amount of physical torture, ritual disembowelment or smiting could perturb even one of their most perfectly positioned tender tendrils, which flowed down to their shoulders in tightly controlled curlicues like a flock of goats bounding down the slopes of Mount Gilead. The Greek archaic kouroi sported similar ringlets but without the violence, in a style approaching that of the mullet, and I lusted after possession of those carefully curated tresses until the corporeal manifestation of Greek singer Triantafyllos and his album «Βλέπω κάτι όνειρα», which sullied that dream forever.

As heirs, as well as hairs to the ancient Greeks, no Hellenic authenticity among our tribe can be truly established unless long hair can be achieved. For it is established fact that even before lockdown, in the earliest times, the Greeks wore their hair long, which is why Homer, who was blind and could thus behold their essence only with his noetic eyes, constantly calls them καρηκομόωντες (long-haired). The Spartans prove that lustrous long hair is ultra-Hellenic by their priding themselves upon it being the ‘cheapest of ornaments’ (kosmon adapanotatos), this being an era before Schwarzkopf Bonacure Time Restore and Pantene Pro-Miracle V. Apparently, the said Spartans even wore their hair in a man bun, and in Athens, languorous locks were also rolled up into a top knot on the crown of the head, and fastened with golden clasps in the shape of grasshoppers, an intoxicating fashion statement that only went out of season during the time of Thucydides, only to be appropriated centuries later, by western proponents of Kung Fu.

My hair on the other hand, such as remains after the ravages of time, rather than cascading effusively and without contrivance in Hellenic fashion down my shoulders and lending itself to flicking as I make flippant remarks, is the antithesis of Hellenic – it defies gravity. Standing perennially to attention, it arches towards the heavens as if pulled by an enthusiastic evangelical during Tribulation, in order to kickstart the Rapture. No amount of coaxing will convince it to stand down and it has an abrasive, bristle-like feel, in no way like the silky-smooth tresses of Yianni, before he met Linda Evans, or Alexander, whose brilliant sheen paved the way for the conquest of Asia.

Nonetheless, it being a time of enforced domestic enclosure, with no danger of public censure and for want of any other alternative, I have these past months determined to allow my hair to grow. In this, I have been making progress. With any luck, any time within the next four months, the hair on top of my head will reach the same size as that on the back of my neck, even as the follicles on the sides display no signs of growth at all. Lately, I am given to massaging it rigorously with my fingers, given that this practice has been prescribed by the ancients as a growth stimulant, although I shy away from applying liberal amounts of honey to it as recommended by Hippocrates, because the jar we retain in the pantry contains Attic Thyme Honey, for whose acquisition at the local Greek deli, blood and copious amounts of soul were shed.

“What are you doing?” my wife enquires, intruding upon my intensive hair care routine.

“You’re supposed to comb it downwards, not upwards,” she observes.

“Yes, don’t you think my lockdown hair resembles that of the bronze statue of Poseidon from Riace?” I ask hopefully.

“No, not really,” my wife begins to pick through my disparate hairs appraisingly. “More like David Ben Gurion in his declining years. You need a haircut.”

“I don’t want a haircut. I want to grow my hair long and look like Apollo.”

“The only Apollo you have a chance of resembling with that hair is Apollo Creed from Rocky. Come here,” she commands, producing from behind her back an ominously shiny pair of scissors.

“No!” I scream defiantly. “Get thee behind me Delilah. Thou shalt not cut my locks which are the foundation of my strength.”

And with that, I stub my toe on the bathtub and hop up and down in agony.

I know that look in her eyes. My fate has been considered, weighed and determined. Judgment is irrevocable. The only thing that remains now is to plead mitigation.

“Just let me grow my hair to Kolokotroni length,” I entreat her.

“Because after I grow it to the required length, you can shave it all off, save for a strip down the back and I can go forth astounding the local populace with my freedom-fighting, Souliote braid. Please, its important.”

“Well, during this time that I am supposed to have been home-schooling the kids and working from home, I think I’ve come up with a tremendous discovery. There is a reason why the fate of Modern Greece has been a particularly sorry one and why none of its leaders have ever achieved lasting success.”

“And what is that?” my wife enquires, distractedly, as she opens a draw in the bathroom console, searching the contents inside and retrieving a razor.

“No Greek leader after Kolokotronis, has had long hair,” I reveal triumphantly. “As such, none of them have truly been leadership material. Had Sakis Rouvas not divested himself of his magnificent mane, the history of Greece in the twenty-first century may have transpired in an entirely more benign manner.”

“So you are vying for the leadership of the Hellenic Republic?”

My wife is most ladylike and the concept of a guffaw is alien to her, so she cannot identify it when it makes its appearance and makes no attempt to stifle it.

“No, I’m just trying to lead by example. The neo-pagans who deride Neohellenes and their Orthodox ways have a point. Except that it is not through the re-established worship of the Olympians that we shall recover our glory but through the re-growth of our hair. Ours is a high and noble destiny. It is time we reclaimed it.”

“Dearest deluded husband,” my wife croons. “Are you familiar with the Khludov Psalter?”

“By Khludov Psalter you are of course referring to the illuminated marginal Psalter made in the middle of the ninth century which constitutes a unique monument of Byzantine art during the Iconoclastic era, one of only three illuminated Byzantine Psalters to survive from that sorry epoch?”

“You will recall the Iconophile illumination of the last iconoclast patriarch, John the Grammarian, with untidy straight hair sticking out in all directions?”

“Well, that is what you look like right now. So, if you want to be an Iconoclast, and to have your coiffure considered ridiculous by the elegant Byzantines, be my guest.”

Truly, there can be no heinous fate than to be considered démodé by one’s fashion-conscious Byzantine peers.

“Do you reckon Constantine Palaiologos had long hair?” I muse. My wife grunts by way of response, for by now she is absorbed in the task of divesting me of my lovingly-cultivated fleece.

“Not like that. And lose the scissors. This is a job for the clippers,” I direct.

“Indeed? His Supreme Klephtness is an authority on haircuts now?” the response is slammed upon my discursive doorstep.

“No, but I once helped to shear a goat in Albania during a power outage. It can’t be that different.”

The vibration of the electric razors upon my cranium has a somnolent effect and soon I am soothed into silence. My wife brushes past me in my trance, aligning the sides, straightening the back and cowing any defiant upstart hair into submission. Finally, she is done.

“Well, it’s not bad. Nice and neat,” she concludes, eyeing her handiwork like a connoisseur. “I’ve missed my calling. I should have been a hairdresser.”

I, on the other hand, am bereft and my head feels cold. Searching into my image in the mirror for a long time, I console myself in the knowledge that my hairstyle now resembles that of Fred Kite in “I’m Alright Jack,” portrayed by my favourite actor of all time, the indomitable Peter Sellers. Greatness looms after all, in moments unsuspect and it is not the length of one’s hair that counts, but rather, what you do with it.

“So what do you think? Should I change profession?”

My mind turns to the heady days of my youth when I harboured an inexplicably passionate and unrequited crush on Sophie the Hairdresser from Acropolis Now.
Now, as I approach middle age, finally, I understand why.