Cementing Greek-French friendship: France to offer immediate military assistance to Greece in case of attack by a third country 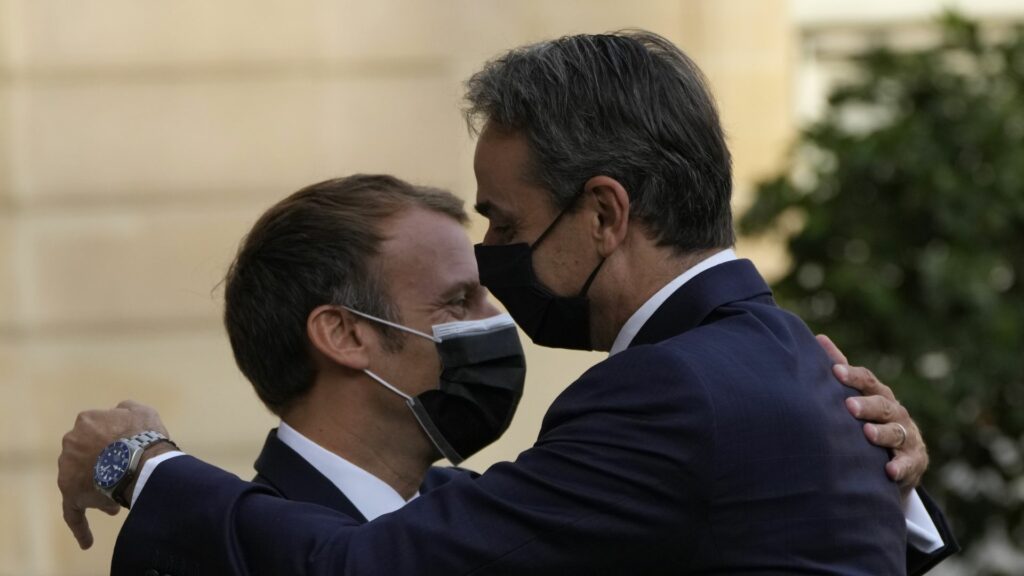 Under the agreement signed by Greek Prime Minister Kyriakos Mitsotakis and French President Emmanuel Macron in Paris on Tuesday, France has pledged to provide immediate military assistance to Greece – and vice versa – in the event of an attack by a third country, even if that country is in one their alliances – such as Turkey, a NATO member.

Government sources stated that Greece will also receive three Belharra frigates (and an option for a fourth) in record time, with full air defence and anti-submarine warfare equipment and the capability to shoot down air targets at great distances. The frigates, with their high technology and long-range weapons systems, will act as a power multiplier in the Aegean and the Eastern Mediterranean, as in addition to their increased capabilities, they will be fully compatible and able to “cooperate” with the Rafale fighter aircraft.

According to government officials, the government is equipping the Navy with its eyes turned to the future, as the three frigates (with an option for a fourth) are offered to Greece at the best price, fully armed and with a record delivery time. The first state-of-the-art “digital” frigate is expected to be delivered in 2025 and the last in 2026.

In this way, Greece’s security is strengthened, while Greece and France have also made a commitment through their strategic partnership agreement that, beyond and above existing structures (NATO and EU), they will assist each other militarily in case of need. However, the bilateral agreement also has a purely European dimension, as it is an acceptance of the doctrine of the strategic autonomy of the European Union by the two countries and is an essential step in this direction.

In essence, Greece and France, with a bilateral agreement guaranteeing the cooperation of both countries in defence and foreign policy, are acting within the framework of their alliances to strengthen the policy of EU strategic autonomy and deepen their relationship within NATO and the European Union.

The provision of three modern Gowind corvettes (with an option for another one) with full equipment is also on the table. Greece moved quickly and secured a very strong defence cooperation after the changes brought about by the AUKUS agreement.

More specifically, Greece will acquire 3 FDI HN (Hellenic Navy) frigates, with a configuration chosen by the navy itself, which is stronger than the corresponding French one.

The ship belongs to the next generation of “digital” frigates, and is equipped with the top SeaFire radar. The latter is combined with the state-of-the-art ASTER 30 anti-aircraft missiles, in their latest version. The SeaFire / ASTER 30 combination will offer area air defence to the Fleet Units, at distances exceeding 100 km, while at the same time it will have Anti-Ballistic Abilities.

In other words, for the first time in its history, the Navy will acquire ships that will be able to shoot down air targets from very far away, while they will also be able to offer protection against ballistic missiles.

The armament is complemented by an advanced 76 mm cannon, but also a RAM system of 21 missiles, which completes the anti-aircraft / anti-missile shield of the ship.

READ MORE: A deal between Australia, the UK and US which has implications for the rest of the world, including Greece and Cyprus

Government sources also stated that the “Strategic Partnership for Cooperation in Defence and Security” between Greece and France means the following:

1. The Agreement seals the close alliance developed by the two countries, upgrades Greece’s geopolitical footprint in Europe and the region, strengthens the country’s deterrent capabilities with the announcement of the acquisition of three new French frigates (details to be finalised in in the coming months).

2. The Agreement contains a mutual defence assistance clause in the event of an attack against one of the two countries on its territory. In this way, Greece is shielded against threats, especially in the Eastern Mediterranean. At the same time, Article 42 (7) of the Treaty on European Union on the mutual defence clause is given substance through the agreement.

3. With the agreement, Greece and France go beyond their obligations towards each other within the framework of the European Union and NATO. At the same time, they are strengthening the European defence pillar and NATO, as they are two EU member-states, as well as allies in NATO.

4. The Agreement is accompanied by an announcement for the acquisition by the Greek Navy of three French frigates.

5. The Agreement provides for cooperation in defence and foreign policy. In this way, Greece will play a leading role, as previously announced by Kyriakos Mitsotakis from the TIF, as well as in his statements at the EUMed Summit, in the discussion on the need for strategic autonomy of the EU.

6. The Mediterranean opens roads. The Greek-French strategic partnership agreement is a first big step towards the strategic autonomy of the EU.

7. Already from his speech at the UN General Assembly, the Greek Prime spoke about the need to develop the necessary defence capabilities, so that Europe can respond immediately to challenges, in its wider neighbourhood, such as the Mediterranean, the Middle East and the Sahel, where NATO will not be “present”.

8. The Agreement provides for regular consultations between the Ministers of foreign affairs and defence of the both countries, both on security and defence issues, as well as on regional and international issues, hybrid threats, maritime security, and migration.

Mitsotakis: Today is a historic day for Greece and France

Μore on subscriber’s page.
ANA-MPA SA. Intellectual rights and copyright are the sole property of the ANA-MPA and are allocated to the Agency’s subscribers for specific uses only.