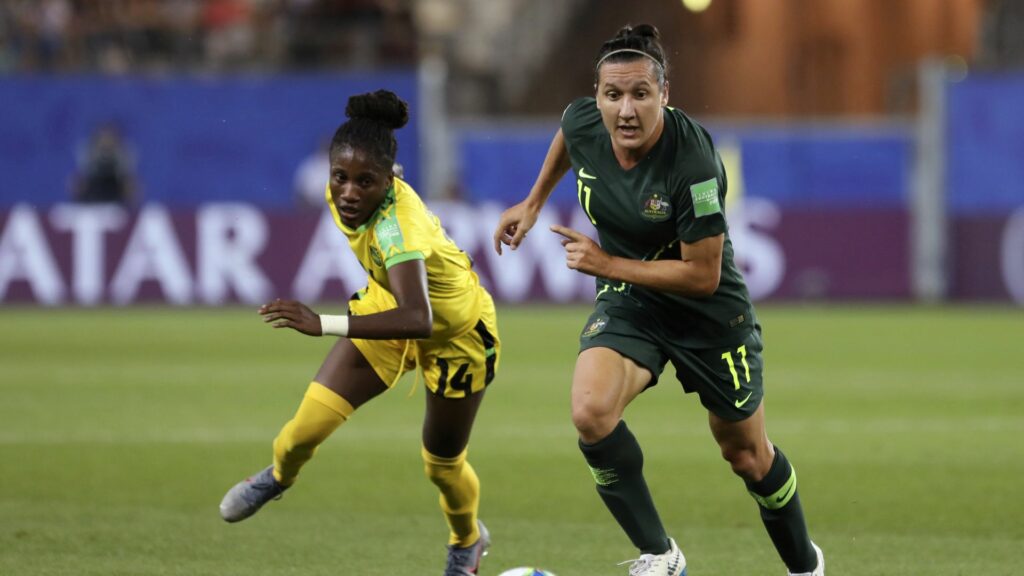 Australia’s Lisa De Vanna, right, challenges for the ball with Jamaica’s Den-Den Blackwood during the Women’s World Cup Group C soccer match in Grenoble, France in 2019. De Vanna, who played 150 games for Australia and was second on the list of all-time of scorers for the women’s national team with 47 goals, said she first experienced harassment, abuse and bullying in 2001 when she joined a national women’s squad at age 17. Photo: AAP via AP Photo/Laurent Cipriani

In 2019 Football Australia (FA) initiated and backed the Independent Review of National Teams Management after one of Australia’s leading international goal scorers alleged she had been groomed and harassed by senior players early in her career.

The process was conducted by a three-member independent panel of eminent figures in Australian sport including Diane Smith-Gander AO, Rod McGeoch AO and Liz Ellis AO.

FA released a statement late on Tuesday outlining the steps the organisation has taken to move forward and remedy some of the pain caused within the industry.

“Australian football takes a zero-tolerance approach to any conduct which breaches the standards and values expected of people involved in the game. To that end, we encourage anyone to bring forward their concerns through Football Australia’s formal complaints process under the Member Protection Framework, with the knowledge that any such matter will be taken seriously and investigated thoroughly,” Football Australia said in the statement.

Lisa De Vanna, who played 150 games for Australia, came forward and shared how she first experienced harassment, abuse and bullying in 2001 when she joined a national women’s squad at age 17.

The top goal scorer told Sydney’s Daily Telegraph she had been pulled down from behind by some teammates and “fought my way off the floor kicking and screaming”.

“They thought it was funny. I was just a young kid from Perth, I didn’t know any different. I … wanted to punch them,” De Vanna said.

“As a youngster and a player I didn’t know how to address this…but it is still happening across all levels and it’s time to speak up.”

FA noted it had met with De Vanna but the “specific allegations” made public on Tuesday were not raised during that meeting.

“We have no knowledge of what steps, if any our predecessor organisation, Soccer Australia, undertook in 2001. In the event that Lisa chooses to lodge a formal complaint through the appropriate channels, we will be in a position to investigate and, if appropriate, act accordingly. The same process is open to Rhali Dobson and other former players and staff to formally bring forward any claims,” FA said.

READ MORE: Australia’s football leagues rebranded and united under one name ahead of the new A-League season

Since the Independent Review, FA claims to have implemented “at least 75 per cent of the recommendations from the review” and intend to go beyond the report’s recommendations to fix cultural issues in the world of Australian Football.

“Key initiatives so far have included the appointment of specialist resources in and around our women’s national teams including new senior and assistant coaches, high performance and technical directors, and a national wellbeing manager,” FA said.

“In addition, we have introduced equal pay improvements, multi-channel feedback processes, and a revised member protection framework and whistle-blower policy. We have majority female representation on the nine-member Football Australia Board, along with a committed Congress which includes a Women’s Council with membership rights in Football Australia – the first for any sport in Australia – and a long-term commitment to the women’s game through our Legacy ‘23 plan.”

In its pledge to improve protocols and the handling of formal complaints, FA has been in talks with Sport Integrity Australia to create an additional process for independently investigating allegations of a historical nature.

“We will announce the joint initiative with SIA once the details have been finalised,” FA said.