The “Infinite Affection” that is passing down traditions through generations 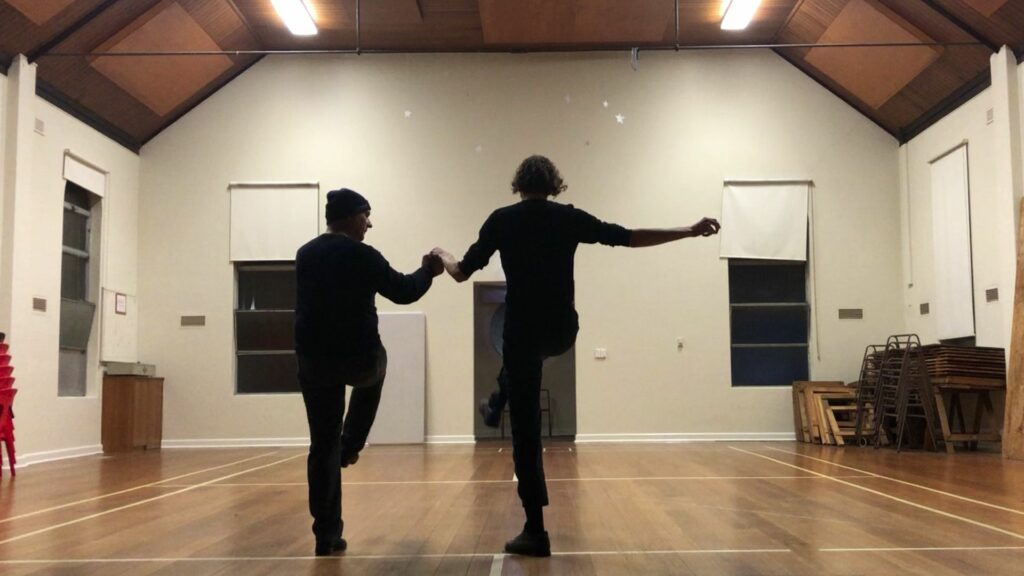 Had the Melbourne lockdown not put a stop to plans, 23-year-old Luke Macaronas and 67-year-old Christos Konstantinides would having been bumping in their Melbourne Fringe Festival show Infinite Affection | Άπειρη Στοργή [Part 1] at the Pontian Community Club in Brunswick.

As fate would have it, they have had to shift their piece of art to an online platform, but with a twist. As a passionate dancer and theatre maker, Mr Macaronas was not going to skimp on the finer details.

“We talked and said if we had made the show and we’ve gotten all the way up to October and then there was a lockdown, we said ‘Oh well, you could film it and put it online’. But there are two things. I really don’t want to do that because I think theatre is live and I’m very happy for people to film work and put it online, but I’m not interested in doing that,” he told Neos Kosmos.

“I think if we’re ever going to have a chance at reviving our live culture, it has to be fighting to be alive and to be together again. So that’s always was always a priority of mine, and therefore anything that I put online or did make online isn’t actually showing that work. It would have to show something else and then as it turned out, we didn’t even have the show because we weren’t able to rehearse for the last two months, so instead we had all my notes and I had all this footage from our rehearsals.”

Infinite Affection explores how dance binds young and old together, passing on tradition and ancestral memory from generation to generation. Part 1 shows the creative process behind the show, sharing the story between two artists, from two different worlds, but with the commonality of their shared heritage.

While the show focuses on Mr Macaronas Greek heritage pulling inspiration from traditional folk music and dances, the idea was initially born when the artist was studying in Tokyo.

“I’m a dancer and I’ve got a lot of training in experimental dance. I was training overseas in Tokyo with a whole bunch of Butoh performers. They had been training together for like 40 years, so I worked with these dancers who were in their 60s and 70s who had just been doing the same stuff again and again and again and so I became really interested in like older bodies and old dancers and how dance changes your body. And then when the pandemic hit and I had to come back to Melbourne, I moved in with my grandma on my mother’s side who’s a Serbian Yugoslavian refugee from from the Second World War,” Mr Macaronas said.

READ MORE: A conversation with our grandparents

The months he spent by his grandmother’s side were invaluable, giving him the opportunity to record her story, her history and preserve precious memories. With this wealth of inspiration, Mr Macaronas set out to meld together three generations worth of ideas and art, and came across icon of the Greek community in Melbourne, Christos Konstantinides.

Mr Konstantinides has been teaching and performing Greek dance and drama for over 50 years.

“Life is informed by the stories and the experiences of older generations and there is this knowledge that’s passed down of love and care, that you can kind of trace back almost infinitely, and that’s where the name of the show comes from,” Mr Macaronas explained.

“It’s really just been a very gentle process of me sharing with Chris my training and my experience, which is more on the theatre side. I think about this show as a theatre piece and then Chris teaching me the folk traditions and it’s really cool. He’s brought in other people who know particular dances that he’s not so confident teaching, and we’re very slowly working out a kind of a choreography and a movement style that speaks to both of our experiences but also tells a bit of this story about growing old and having this tradition.”

The show also confronts the reality of ageing and hopes to bring some awareness to the fact that although old, elders still have the capacity to contribute to the world around them.

“A lot about what the show is about as well and is saying is that particularly in Australia, but also in many other parts of the world, we have a real problem with how we think about ageing and we’re afraid of it and we’re uncomfortable with it. In the worst case scenario, that’s why I think we have a culture of elder abuse and why there’s huge problems with care for old people,” Mr Macaronas said.

“But even on the other end of it, I think it is saying it’s that we need to find ways to say yes, your body has changed and you can’t do the things you use to do, but what can you do now. It’s about, now that you are older and now that you see the world differently, you have imaginative and creative possibilities for your body that are really unique and totally belong in the culture.”

When tradition is called upon for creativity, we often find there is a rigidness and a resistance to pick it a part and explore different facets in different contexts.

The dynamic duo have not been afraid to delve into the elements of centuries old traditions and create a new story.

“Tradition is beautiful and the danger in any attempt to preserve is that you make something stagnant or that you fix something and really any engagement in culture that is respectful and that preserves what tradition is about, is actually one that looks at what is the emotional truth in this practice,” Mr Macaronas said.

Mr Macaronos points to the songs of Epirus and the women mourning their husbands who have left to work overseas.

“If you really want to sit there and you can notate the music and say we need to exactly capture this song, that’s fixing it in its time and in its place. But if we say here are songs and laments specifically about migration, and specifically about travel, how do we as Australians understand that? What can we bring because of the place we are in now that changes that, but that honours the core, the heart and the soul of the tradition. And I think it’s definitely hard to get that across and to bring people on that journey.”

You can explore the Infinite Affection | Άπειρη Στοργή [Part 1] webstage up until 17 October by visiting www.melbournefringe.com.au/event/infinite-affection/ and keep up to date with when the in-person performance will be by following the show’s Facebook page.

The production team is always on the lookout for other elders in the community who have experience dancing. If you think you might be able to contribute to the project you can get in touch by emailing through at infiniteaffectionshow@gmail.com