On Friday morning, Melburnians woke up to the end of the city’s sixth lockdown.

At midnight, there were cheers from balconies in downtown Melbourne.

Euphoria was justified. Since March 2020, Melbourne has spent 263 days in lockdown, more than any other city in the world. It’s been a long and arduous journey for its five million people, and Victoria’s Premier Daniel Andrews told reporters on Friday that despite high numbers of new cases, there will be “as few rules as possible” by Christmas.

“I hope to be as close to normal as we can possibly get,” he said.

But for business, at least those which have survived six lockdowns, what is “normal” still needs to be defined.

On Thursday, hospitality began to rise from its slumber but things did not open up as quickly as they were shut down with a number of Greek restaurants and cafeterias still not operating due to lack of staff.

Stan Mihailidis, who co-owns Cafe Kinetic with his wife Eva, on the Paris end of Flinders Lane, said that there “have been a lot of casualties” during the latest city shutdown.

“The closures are one of the saddest things I have seen,” he said.

He attributes his own survival to his tendency to stay loyal to staff and customers and stay open throughout lockdown, which was not easy.

“I won’t lie. Revenue dropped but though many cafes decided to shut down around us, we felt obliged to stay open for staff and to serve our loyal customers. We also had a lot of construction workers coming through for click and collect,” he said.

The 10 to 15 staff members worked fluctuating shifts, and did not have their hours cut though a few chose not to work due to health concerns amid the pandemic.

Mr Mihailidis believes that if you take care of your team, then they’ll take care of you – a theory which was tried and tested during lockdown. It worked. Now he is looking for more even staff to train before catering events open up.

On Friday, the cafe, which seats 110 people indoors and 30 people outside, was inundated with patrons on the first day of operations.

“They flooded back in, and there are many old customers as well as fresh faces,” Mr Mihailidis said.

“A lot of people were generous and wanted to show their support for small business by buying a coffee and leaving a good tip. I’m very proud at how they are supporting business.”

In Oakleigh, on Friday, only three Greek restaurants along Eaton Mall opened for dining: Mythos, Meat Me and Hunky Dory.

Greeks from all over Melbourne came to eat.

Yiannis Batzias, 82, of Camberwell, came to MeatMe Souvlakeri, with his two sons, Nick, 50, from Windsor and Markos, 48, from Brighton, to have their first meal out of lockdown, in Oakleigh’s Hellenic precinct.

“This is our first meal out,” Mr Nick Batzias said.

“And we wanted to come here to eat Greek among Greeks.”

The trio drank frappe and ate gyro among other things. The sons said their father was paying.

Further up at Mythos Bar, friends Deanna Karamoshos, 18, of Cheltenham and Kaitlyn Sidopoulos,18, of Bentleigh, shared a plate of gyros and octopus.

“We just wanted to catch up,” Ms Sidopoulos said. 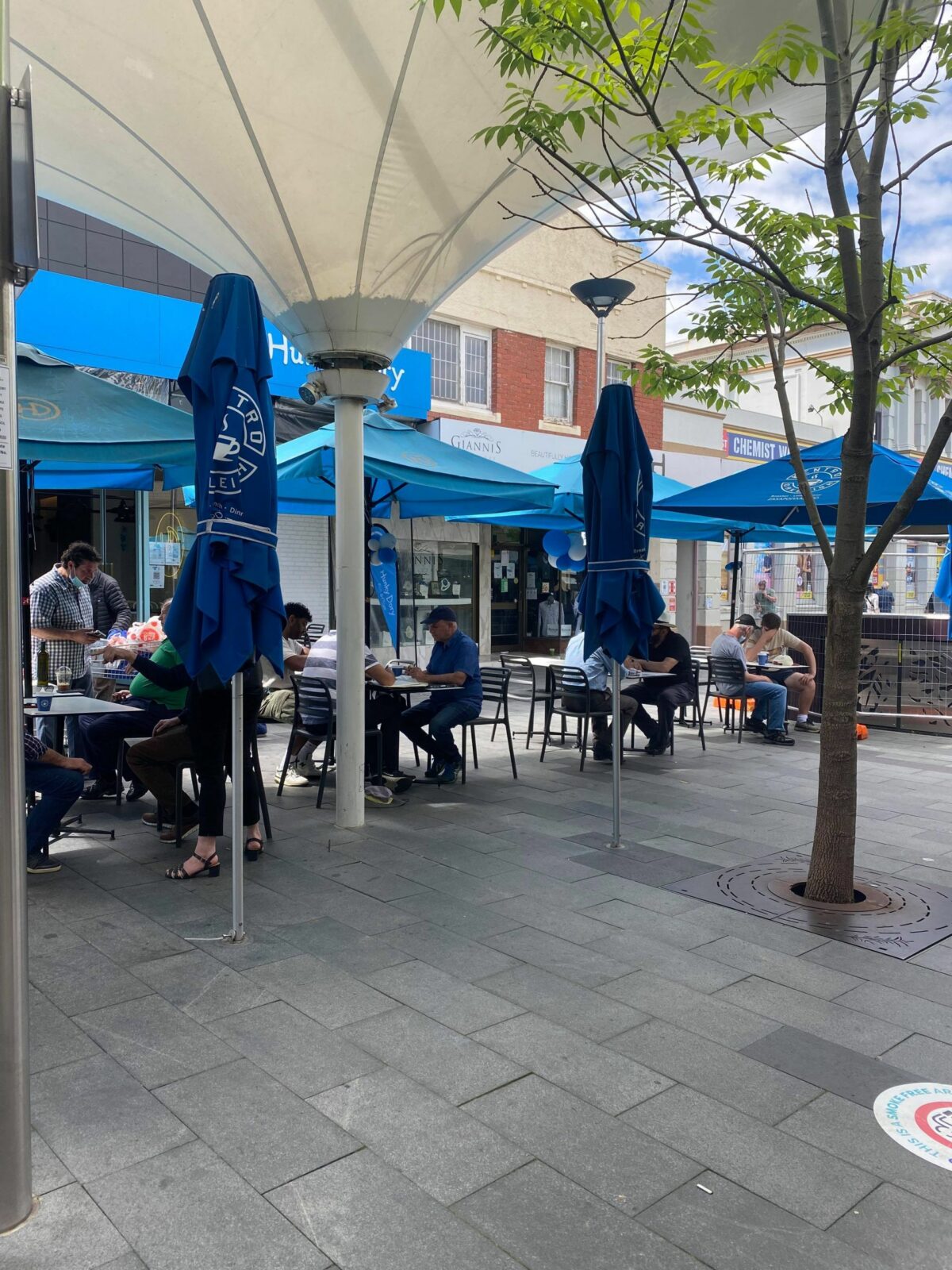 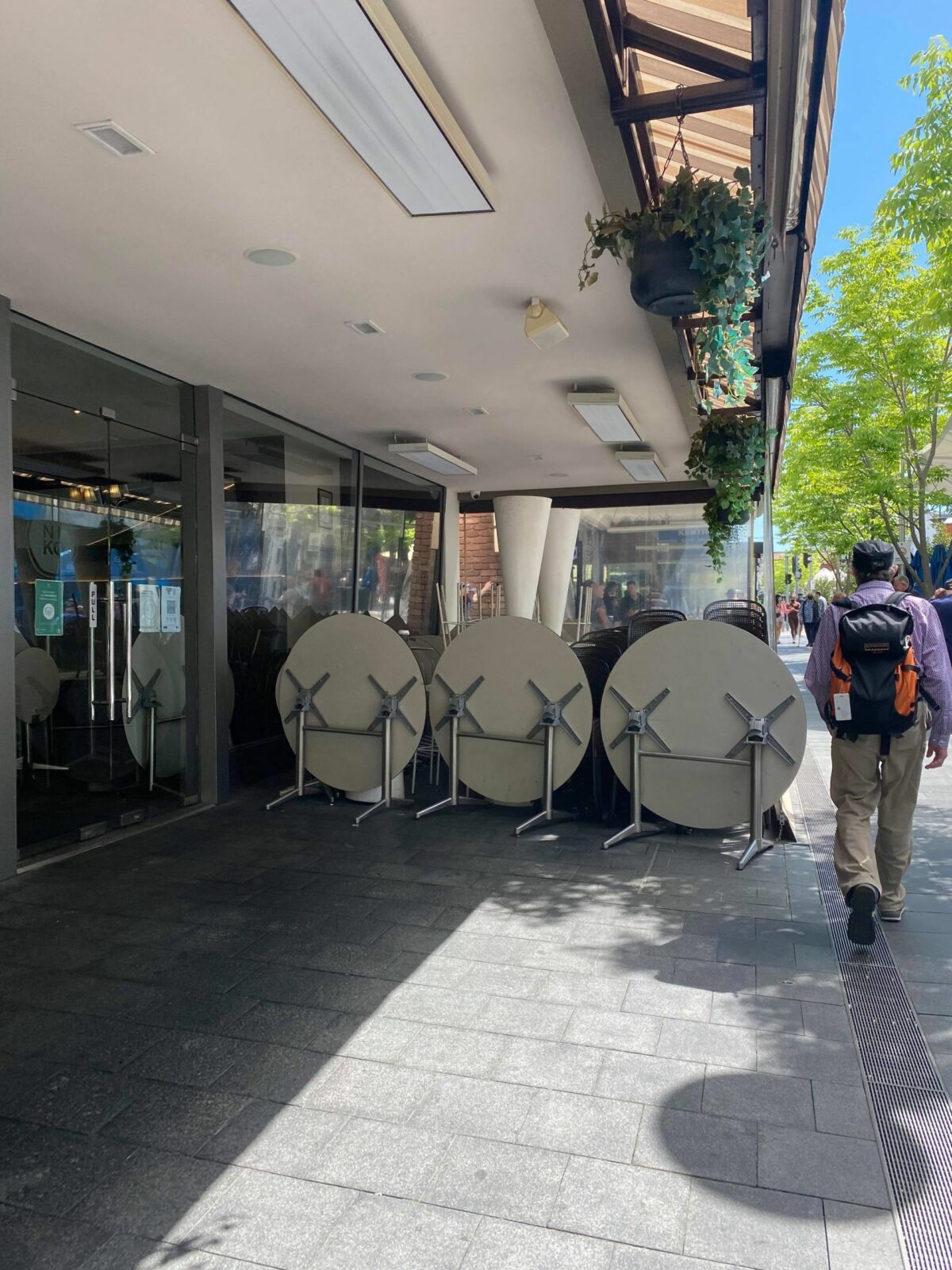 John Rerakis, owner of Philhellene Restaurant at Moonee Ponds told Neos Kosmos that it was the customers that alerted him that government restrictions were easing earlier than planned though the numbers are just 20 clients indoors and 50 outside.

“Twenty clients are better than none,” Mr Rerakis said.

“Staff and clients are enthused. The weather is opening up, feasts are coming and you can see everyone’s psychology change,” Mr Rerakis said, adding that what stresses him is the vaccination status of clients.

He stressed concern regarding the monitoring of vaccinations.

“I am not a policeman. My job is to serve food to people and ensure they leave pleased, something which I know how to do after all these years,” he said.

“But now we need to ask clients whether they are vaccinated and that is somewhat personal and there is danger of misunderstandings as there are many who have their objections.

“I have my views but I don’t want to go into the process of arguing with anyone over the matter.”

Mr Rerakis said that humour and positive thought is the antidote to the situation, something he practices daily.

ILIOS tavern is also expecting a busy weekend ahead.

Mr George Manifadas, the owner of ILIOS, said he doubts that there will be problems concerning the monitoring of vaccinated guests.

“A large portion of people have already been vaccinated, and it is likely that these rates may reach 80 to 90 per cent in two to three weeks. Those who make bookings tell us that they are vaccinated even before we ask them to, therefore I doubt there will be any problems,” he told Neos Kosmos.

ILIOS, like many restaurants, has been booked days before its opening.