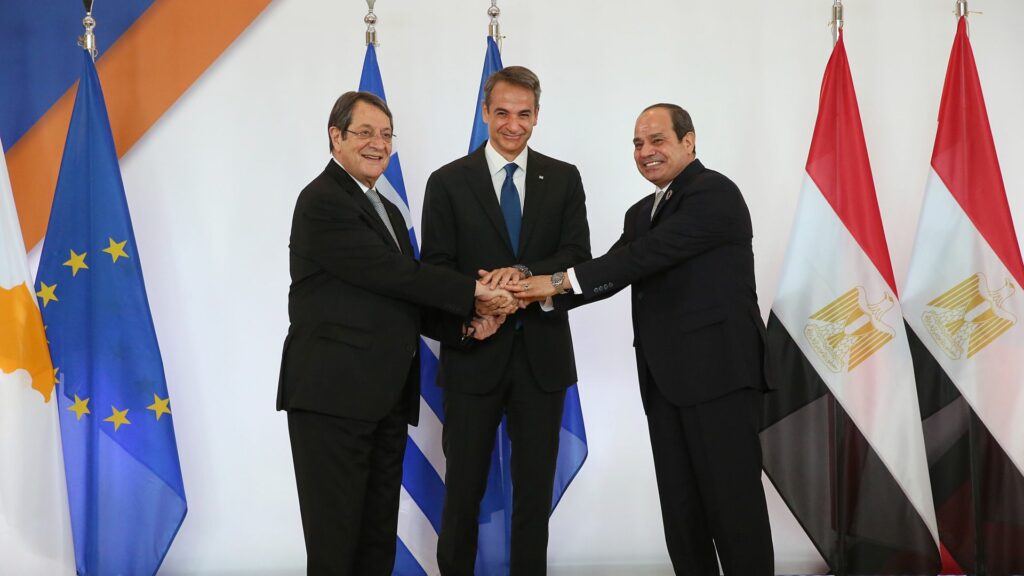 Greece undertook on Tuesday 19 October 2021, to take the necessary steps to link Egypt’s electricity needs to the European Union’s energy grid. It is proposed that a cable will carry electricity from Greece to Egypt. Greece’s Prime Minister Kyriakos Mitsotakis said after meeting in Athens with Cypriot President Nicos Anastasiades and Egyptian President Abdel-Fattah el-Sissi.
Earlier this year, Greece completed an energy link by undersea cable from the southern Peloponnese to the island of Crete. Prime Minister Mitsotakis went on to say: “[we] are seeking diversification of energy sources, and Egypt can also become a provider of electricity, which will be produced mainly by the sun.”

These initiatives have come during a global energy crunch, which has raised the cost of natural gas, oil, and other fuels which has led to disruption in supply and the affordability of energy. Prime Minister Mitsotakis said the project would be a: “bridge between Egypt to Europe, allowing [Cairo] to take on a key role in energy security at a time of major turbulence in the energy market.”

Last week Egypt signed agreements with Greece and Cyprus to establish undersea interconnectors. The details of the proposed ventures have not yet been negotiated. Greece is seeking to expand energy cooperation and supply arrangements across the eastern Mediterranean with Egypt and Israel.

Greece continues to remain at odds with Turkey over sea boundaries, seabed mineral rights, and general energy matters. Prime Minister Mitsotakis accused Turkey of continuing hostilities with respect to Turkey’s purported territorial claims. In substance, there is no dispute, they are Greek territories on the proof, and on a historical basis, Hellenes everywhere strongly contend.

Regardless of all that, the Greeks should continue to advance energy security objectives in tandem with Egypt and Israel. Greece is establishing itself as the leading force in the supply and exchange of energy in the eastern Mediterranean.

The Greek Prime Minister said: “Turkey’s aspirations at the expense of its neighbours in the eastern Mediterranean obviously represent a threat to peace in the wider region.”

Turkey has accused Greece of making unreasonable demands for maritime exploitation, asserting jurisdiction in areas surrounding multiple islands near its coastline. Athens says it wants to resolve the dispute at The International Court of Justice, which has its seat in The Hague.