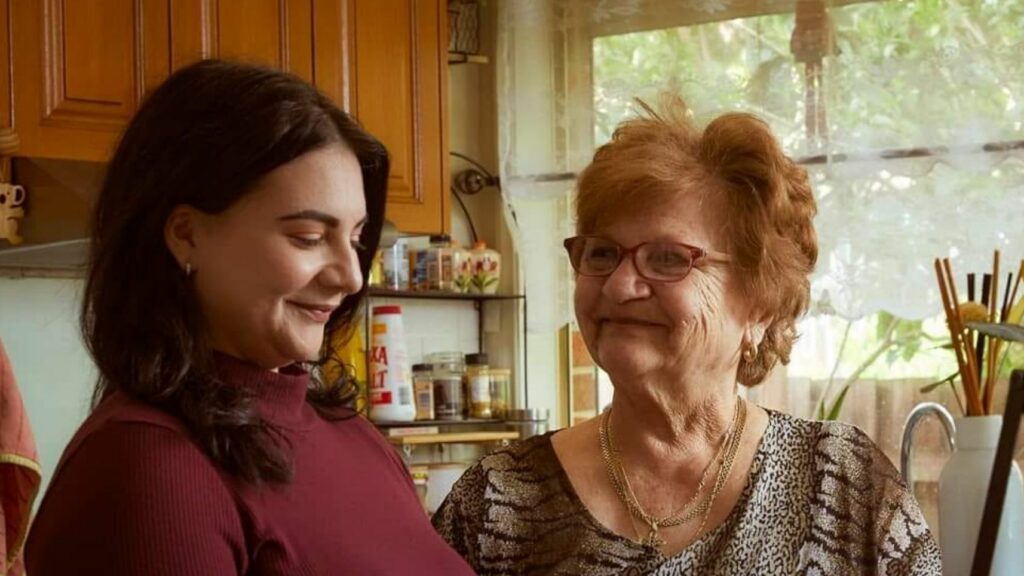 Mercifully, the Victorian government social media advertisement promoting vaccination against the dreaded coronavirus, the subject of this Diatribe, is not in Greek. Most of the time, the Greek in state sponsored advertisements is dreadfully stilted, often a painful word for word translation, as literal as Origen’s Hexapla. Indeed, the advertisement does not appear to address Greek speakers at all. Instead, it is directed towards their English-speaking descendants and proffers consideration by means of inducing compliance, presumably because there is a supposition that our tribe does not respond to direct orders: “My vaccination is my ticket to cups of tea and advice from yiayia.”

It was veteran journalist Kostas Karamarkos who first commented on the social implications of the advertisement thus: “It’s nice to see Facebook vaccination info material, run by the Victorian Department of Health, where they use the Greek word yiayia, instead of grandmother for example, but they have to know that… Greek yiayiades do not have a preference for tea… Nevertheless, I welcome the initiative as an attempt to produce a culturally diverse and inclusive message, in a multicultural society, that Australian bureaucracy does not really know well, after so many decades of officially practicing ‘celebratory’ multiculturalism.”

It was not the tea that made me uneasy when I first saw the advertisement. Rather, my eye was drawn to the vase with what look like elongated giant cinnamon sticks positioned on the counter top, near the kitchen sink. One can never generalise for this far along our history we are too diverse a tribe to warrant typecasting, but it is generally the case that the kitchens of Greek grandmothers are to all intents and purposes purely functional, utilitarian workstations. As such, the location of the vase so close to an area used for washing, drying and cooking reeks of artificiality.

READ MORE: Loss during COVID-19: “My yiayia died and I didn’t get to say goodbye”

Below the vase are two bottles of what at first glance appear to be Bosisto’s Eucalyptus Oil, a staple in many Greek-Australian homes, although as an afterthought, it should be noted that the brand uses a red label for Eucalyptus Oil, while in the advertisement, the blue label properly denotes Peppermint Oil, an essence not generally utilised by Greek-Australians. Even if they do, it is more than likely that such oils would not be kept on the kitchen counter where food is prepared, but rather in the laundry or garage.

One is unable to see the ubiquitous kandili burning before the icons in most yiayiades homes, or a souvenir tea towel. Rather, suspended from a rope from the doorknob of the upper kitchen cupboard door, is a koala, just a subtle reminder of which country we are in and where our loyalties should lie. The various paraphernalia that are the staple of the traditional Greek Australian kitchen are conspicuously absent. There are no photographs of the grandchildren, or of departed loved ones and no figurines from the trip to the homeland in 1997. If anything. the aesthetic is reminiscent of the time when, in her absence on that trip in 1997, yiayia’s son took it upon himself to renovate the house, remove all vestiges of mission brown and bring her Thomastown brick veneer house into the twenty first century. Thus, as if by means of accompanying the forced smiles and the way the grand-daughter refuses to meet her yiayia’s eyes but rather purses her lips and looks downward, the atmosphere is cold and sterile, the antithesis of the essence of everything that a Greek kitchen has signified since the time of Homer.

It was only then that I noticed the tea and it took me a while to consider why this was not the first thing that leapt out at me upon my original exposure to the advertisement. The answer is simple. My family came here before Greek coffee was readily available and thus tea was the only beverage of choice. Further, my paternal grandmother, who came from Samos, on the Asia Minor littoral, already came from a tea-drinking culture, whether this was the ubiquitous camomile which grows on its hills, or Greek mountain tea, which is a native species of the island. Our time together was punctuated by tea drinking, served always in enamel glazed mugs that I am certain contained lead paint, while she would lecture me on the evils of coffee drinking. During those tea drinking sessions, an entire village lore, family history and code of conduct were passed down to me. The tender act of the granddaughter receiving advice while imbibing tea, appeared perfectly natural to me although it should be pointed out that while the granddaughter in the advertisement is depicted agitating a tea bag in a stylish mug, the grandmother’s beverage remains a mystery, covered by an illustration of a mobile phone. While Kostas Karamarkos is undoubtedly right when he suggests that among the majority of elderly Greek-Australian homes, Greek coffee is the beverage of choice, had this been substituted for the tea in the advertisement, would its depiction be considered a form of stereotypisation, entrenching a restrictive code pertaining to our portrayal by the mainstream and restricting an appreciation of the multi-faceted nature of our social norms ? Viewed from this perspective, the tea-drinking suggests an understanding of the diversity within the Greek-Australian community. On the other hand, is the portrayal of tea drinking a manifestation of mainstream ignorance of the traditions of Greek-Australians? As Kostas Karamarkos asks, “Is tea the predominant or the representative Greek-Australian [beverage] when we visit yiayia or pappou?”

Underlying Kostas Karamarkos’ argument is a particular understanding of the symbolism of tea in Australian culture. He highlights the tension between: “stereotypes vs representation. Especially, when tea is a characteristic of the hegemonic culture.” Tea in British history is undoubtedly a tool of colonial oppression. Commercial production of tea was first introduced into India by the British, thus destroying local microeconomies and industries, in an attempt to break the Chinese monopoly on tea, so as to weaken the Chinese markets and render them susceptible to penetration. Similarly, it was the British excise on tea that proved the catalyst for the proclamation of the American Revolution. Is the depiction of migrant Greek-Australians drinking a beverage traditionally produced by exploitation and utilised as a form of colonial oppression thus implicating them in a discourse of violent appropriation of the lands of the First Peoples? Is their tea-drinking a subconscious attempt to legitimise that conquest? All of these are pertinent questions.

I, for one believe that the act of drinking the traditional herbal teas of Greece can be considered a subversive, not a subservient act, one that expresses solidarity with the First Peoples and their plight. We know for example, that several First Peoples drank an infusion from the plant species leptospermum. Upon reaching Australia, Captain Cook noticed them drinking it and called it tea. They sourced it naturally from the environment around them, just as our pappou and yiayia did. Both parties did not subjugate anyone or force them to grow it on their behalf, taking only what they needed when they needed. In both cases, the relationship with land is one of respect and harmony. By drinking tea, are we therefore not subverting the entire colonialist paradigm, asserting an understanding of country and environment completely antithetical to the dominant discourse?

Possibly not, for the young lady in the picture appears to be drinking conventional tea, picked, packed and perfected in the cool highland of Ceylon for her enjoyment. As my discussion with Kostas Karamarkos grew deeper, we postulated what cultural determinants or stereotypes would be displayed in versions of the advertisement targeting other communities, causing former Federal MP Carlo Carli to intercede to point out, that the advertisement in question appears to be specific to the Greek-Australian community, possibly: “a reflection of a higher level of vaccine hesitancy in the Greek Australian community…” In that case what is therefore encoded in this advertisement is a deeply disquieting set of governmental assumptions about our trust in government, our propensity to obey health directives, our method of engagement with science and politics and our perceived level of social responsibility. But analysis of the racial and other considerations that engender those assumptions and reinforce their presuppositions, make for a stormy tea cup indeed…