For the fifth year since its creation, Byzanfest reveals where art, morality and the creative art of drawing lines, parallels and attention, meet in, diverge from and embody, the multi-faceted Orthodox perspective Byzanfest is the brainchild of Melbourne-based Chris Vlahonasios. Established in 2014, it is an international film festival totally dedicated to Orthodox Christian cinema. According to its founder, its aim is simple: to stream, screen and share the very best Orthodox stories with the world. Seven years since its foundation, it has a cult following, with participants throughout the world, speaking various languages and coming from diverse ethnic backgrounds, engaging in the creative process and submitting their films for review and criticism.

The choice of title for the annual festival is an interesting one. “Byzan-”, according to Chris Vlahonasios, pays homage to “the great Byzantine Empire, a place of great wisdom, art and faith. Although it may no longer exist, the spirit and values of Byzantium shine out in the works of Orthodox Christians in the Digital Era.” Yet never throughout its long life did that Empire call itself Byzantine. And indeed, the word Byzantium, the original name of Constantinople, properly refers to its pre-Christian past, as the city founded by its legendary patron, Byzas of Megara. According to myth, the oracle at Delphi sent Byzas to found a city in “the land opposite the city of the blind”.

Arriving at the spot where the Sea of Marmara meets the Bosporus, on the border of Europe and Asia, Byzas finally understood the meaning of the oracle. On the Asian shore, opposite to where he was, the colony of Chalcedon, had already been established. This was the prophesied ‘city of the blind’, as its founders had ignored the prime strategic location, where he would go on to establish his fabled city.

Byzanfest is therefore a particularly apt name because when it comes to film, a visual medium pat excellence, seeing is everything and the viewer who “attends in wisdom,” will be richly rewarded. Furthermore, just like Byzantium itself, the films are subtle, polyvalent and ambivalent.

As Orthodoxy is steeped in tradition, it has often been stereotyped as hidebound, conservative, apprehensive of modernity and fixated upon the past. How does it relate to the modern medium of film? Chris Vlahonasios is quick to respond: “The Festival showcases films which reflect Orthodox Christian themes, beliefs, culture and values. However, an entry’s storyline does not necessarily have to be ‘religious’. Although the film may not appear to have ‘Orthodox’ subject-matter, it can still be deemed Orthodox because it was created by an Orthodox Christian filmmaker who maintained an Orthodox phronema (‘mindset’) during the creative process, remaining faithful to their Christian sense of dignity, morality and self-respect.” 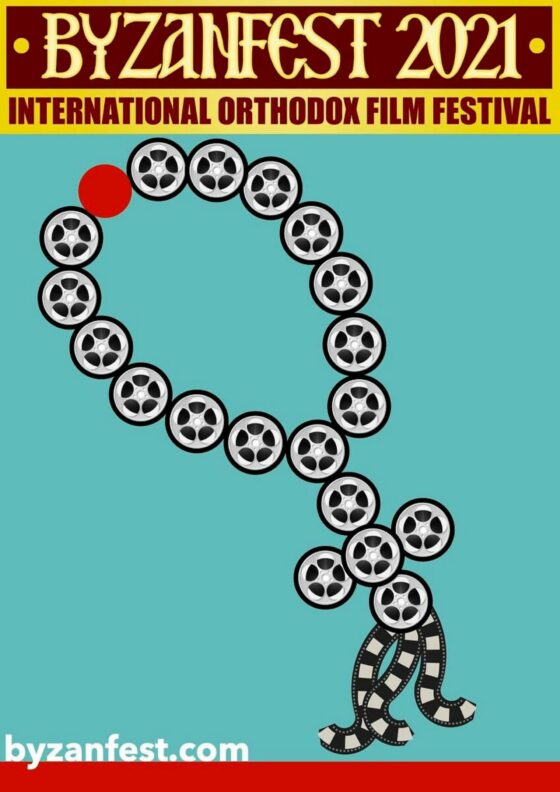 The short films showcased in this year’s festival reflect that diversity in approach. Some take the form of documentaries, telling the story of lesser-known aspects of Orthodox history such as the establishment of the African Orthodox Church, as part of a quest for political and social emancipation. Another, featuring interviews with British converts to Orthodoxy who now serve as priests in the Russian Orthodox Church explore their own personal journey, with one priest in particular outlining how Orthodoxy is a sensual experience, offering participation to all, from the youngest to the oldest, through touch, taste, sight, hearing and smell. Others still, record aspects of monastic and liturgical life, providing a visual poem as to how these relate to the modern world.

By far, the most fascinating short films in Byzanfest this year, are the experimental ones. The soundtrack of “Dragonfire” and the selective use of the Celtic-like decoration on the border of an icon, conjuring up in the viewer associations with the genre of Fantasy Film and in particular, with the Game of Thrones franchise. By the end of the short, however, we realise we are being exposed to a different type of lore, that surrounding Saint George, the dragon-slayer. Rather than being derivative, here the film-maker strikes at the heart of the essence of Byzantium: a civilisation that was neither European nor Asian, which transcends narrow generalisations and from which, although the West has forgotten, many of the legends, lore and stories that form part of the its canon, actually derive.

“Last Chance”, on the other hand, is set in a brutal dystopian environment, sometime in the future. This is a kill or be killed world and the main character does exactly that. Chancing across an abandoned monastery in the bleak landscape, he views, possibly without comprehension, a fresco icon of an angel. He falls to his knees and then collapses. In the next scene, a man wakes in a forest, with a noose around his neck, connected to a snapped branch. How is this verdant world connected to the blasted one at the beginning of the film? Who if anyone has been saved? These are questions that will engross the viewer as they grapple with the ethical premise of this powerful film.

Continuing the dystopian theme, is “Dystopic Virtues,” a moving film that inverts and subverts traditional biblical motifs. An incarcerated boy is taunted for talking to another girl who appears not to be able to speak. The boy tosses an apple out of his taunter’s hands as she mocks him. As we learn, the incarceration has come about because the boy accepted an apple from the girl, in violation of a law against sharing. The parallels with and adaptations of the biblical story of Adam and Eve are particularly apt in this poignant vignette.

Although it is probably not meant to be so, “The Meantime” for me is the most disquieting short film. Featuring an elderly Greek lady suffering from dementia, she disjointedly makes observations about her life, which was a particularly hard one, while viewing family photographs, or bizarrely wearing boxing gloves, as her grand-daughter grunts inarticulately in response. On several occasions, the old lady remarks that she is as afraid of the dark now as she was when she was a little girl. In a Proustian scene where she sings one of her favourite Sophia Vembo songs, a lament to lost time, the screen grows increasingly darker. Ostensibly, the film is about the lady accepting care after a lifetime of caring for others, but for me, the sense of loss, loneliness and of fear of death as life to draws to a close, is palpable.

“God’s Will”, a contribution from Serbia is hilarious, quaint and endearing in the unselfconsciousness manner of its narrative. A group of nuns are driving along a road, perilously close to being killed because the only driver among them, is more concerned with the welfare of her cat, Bagheera, than with the road safety. Stopping in a forest, they discover what they believe to be a fugitive war criminal. As the nuns prevaricate, and bicker in working out how to deal with him, they expose the conflicts within their own understanding of the notions of hierarchy, collegiality, forgiveness and ethics which come to a climax as they experience the loss of their beloved pussy. When Bagheera, who eerily resembles Salem Saberhagen, Sabrina the Teenage Witch’s cat, is found at her delighted mistress’ feet, the concatenation of events leading to this fortuitous happenstance, God’s Will is exposed as mighty and uproariously funny indeed, proving that despite what the West may tell you, the Orthodox do have a sense of humour, however dark. Yet within the humour, the perceptive viewer will appreciate the matrixial gaze of the film-maker, which offers the female protagontists the position of a subject, not of an object, of the gaze, while deconstructing the structure of the subject itself, and offering border-time, border-space and a possibility for compassion and witnessing. As such, the film masterfully articulates the links between aesthetics, Orthodox ethics and trauma.

The feature length film showcased in this year’s festival range from documentaries about Orthodoxy and climate change, the relationship between Science and the Orthodox Church, and the lives of Romanian Saints. “The UnLost Homeland” by far the standout piece, follows the story of Twelve Greeks from Constantinople who lived through the harrowing Constantinople pogrom of 1955. Also eminently poetic and evocative is: “The Shepherd,” where Mavrogenis, a kind-hearted shepherd, takes literally his priests preaching about the straight path that people must follow in order to find Heaven and see God. Consequently, he starts walking straight in the hope to find Heaven. Just before he starves to death, he stumbles across a remote monastery where he stays a few days to recover. It is here that he will witness a miracle beyond all understanding.

Although this may be the meta-Hollywood age, we are constantly being bombarded with media, most of which expresses a similar world view and encodes the values and cultural experiences of the dominant ruling class. By instituting and successfully running Byzanfest for the past seven years, Chris Vlahonasios is assisting in the formulation and articulation of much needed alternative narratives, giving prominence to a wealth of tradition that exists on the margins of the mainstream. But then again, that is what Byzantium has always been about. G K Chesterton once observed that “Art, like morality, consists of drawing the line somewhere.” Byzanfest reveals where art, morality and the creative art of drawing lines, parallels and attention, meet in, diverge from and embody, the multi-faceted Orthodox perspective.