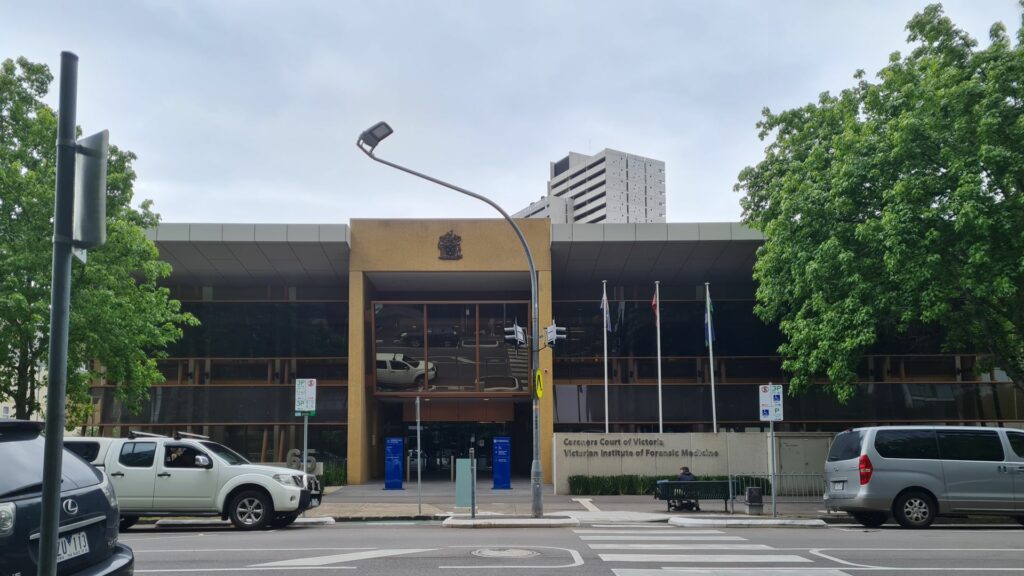 The Coronial Inquest at the Coroners Court of Victoria. Photo: NK

A private aged care staffing provider told the Coronial Inquest on Wednesday that there was a struggle to fill shifts at St Basil’s Home for the Aged in Fawkner as COVID-19 spread through.

The inquest into the deaths of 45 residents of the nursing home by Victorian State Coroner John Cain has heard that the temporary surge workforce should have been three times regular staffing levels. There were 66 staff members to fill regular shifts from 22 July last year; however on the eve of their replacement, they were 15 registered nurses and 15 nurses short.

Neil Callagher, who headed up the Commonwealth’s Aged Care COVID-19 Implementation Branch, was tasked with finding replacement staff and turned to Aspen Medical under a multi-million dollar government contract. Despite the gravity of this undertaking, the court heard that Mr Callagher did not have a university degree and prior to working at the Department of Health in 2013, had “no particular work experience in relation to aged care”.

Grilled all day until 4.15pm, Mr Callagher was the only witness who appeared at the Coronial Inquest on Wednesday, and his statements shed light on the problems caused by government decisions.

“I definitely would have benefited from more knowledge, especially from the health service people who were there,” he said.

Mr Callagher said that he pushed on with the task to find replacement staff “no matter how difficult” despite his own personal views that the Victorian government’s decision to replace all staff was not the right one.

He favoured a commonwealth push for Victoria’s Department of Health to reduce patients by sending them to hospitals in order “to give them a fighting chance”.

“Our concern was about not just our ability to make up the actual number required but the actual type of staff that would be required, particularly around clinical governance,” he said.

“Once that is removed, the risk to resident welfare increases significantly.”

Initially, Mr Callagher understood in his communications with Aspen Medical on 21 July that they had capacity to assist, but late in the day, at 6.30pm,  it turned out not to be the case when an Aspen Medical staff member sent Mr Callagher an email: “I appreciate it’s not a pretty picture. We’ll be back on deck early tomorrow to try and pull people to serve St Basil’s.”

“To me, in the circumstances, that was unacceptable given the nature of the contract and the services that we expected them to provide,” Mr Callagher told the inquest.

St Basil’s management were “resistant to vacating” but met their undertakings to provide information, while the people making decisions were not informed as to the real situation with most of them in Canberra making decisions “on the run”.

Minutes of a 20 July meeting were heard in court, which included pleas by doctors. In particular, Dr Sandra Brown, a medical practitioner involved in caring for residents, raised concerns and “became very emotional”. She was concerned that there would be a “dramatic drop in care standards” for the residents.

“Let’s not repeat the mistake that we’ve just seen a few days ago at Estia Heidelberg” was the “gist of the message”, the court heard.

“They were her sentiments and she put them through very emotionally,” Mr Callager said.

Mr Callagher, in his evidence, had given a statement about “pushback” by then chairman Konstantinos Kontis, who resigned in September 2020.

“He was reluctant to proceed with the decision that was being imposed upon him,” Mr Callagher said regarding Mr Kontis.

Mr Kontis was advocating against the 100 per cent furlough staff. In a meeting on 21 July, 2020, at 3pm, it had been flagged that there were independent living units on site, and Mr Kontis “wondered whether these could be considered on staff who are isolating to provide guidance to new workforce”, according to court documents.

Mr Callagher told court that “he probably did raise this”.

Vicky Kos had said at the time, according to documents heard in court, that regular staff “could be on the phone to provide guidelines and senior staff can provide orientation”.

In documents read in court it was stated on 22 July that “St Basil’s management agreed to provide whatever immediate assistance was needed and ongoing support, including taking phone calls to provide background information about residents and management of the facility, however the replacement management subsequently reported that their phone calls and emails often went unanswered.”

He said, they resisted to the proposed course of staff being removed but did comply with the process taking place. “The cooperation was given grudgingly by Mr Kontis in particular,” Mr Callagher said.

Due to the length of Mr Callagher’s statements all other appearances have been pushed for tomorrow.