Greek Migrants on board a migrant ship in 1948, all smiles before they arrive at Station Pier. Photo: Australian National Maritime Museum Collection

Under the pressures of the Melbourne lockdowns, a diamond was created in the form of an Instagram account which has now amassed over 85,000 followers, including the likes of Aussie superstar Kylie Minogue.

Industrial relations lawyer, artist and self proclaimed history enthusiast Chris Macheras began sifting through photographic archives and uncovering a Melbourne that felt foreign yet familiar all wrapped in one. He felt the need to share the magic of old Melbourne with the world and launched his Instagram page @oldvintagemelbourne in June 2020 after not being about to travel into the city for work.

“I was saving all this time because I wasn’t going to and from the city every day for work and I stumbled upon some library archives from the State Library of Victoria and on there I just discovered these photos of Melbourne, these old photos of our city and I just thought it would be an incredible thing to post them on Instagram and just start a conversation about people reminiscing about the past,” he told Neos Kosmos.

“It’s a lockdown project that is one real positive thing that came out of the lockdown for me.”

READ MORE: Early Greek Australians: A glimpse into the Easters of our past

The page gained such traction that Preston born and bred Mr Macheras translated these cultural gems into a coffee table book, named after the original social media page. The book features images of iconic Melbourne buildings, to tableaus of life in decades past.

Mr Macheras does however have a soft spot (and perhaps a little bias) for those photographs that share snippets of the lives of the many Greek immigrants who docked upon the shores of Australia searching for a better life. As a grandchild to his own immigrant grandparents, the 28-year-old can be forgiven for his slight partiality.

“The bottom line is like it stems from love, that love for my grandparents. I absolutely adore my grandparents and I have so much respect to the struggles and hardships that they encountered going from this poor village to here, without knowing a language, without having a profession or an education.

They worked so hard to in order to give me opportunity…I grew up with them talking to me about industrial life in Melbourne. My grandmothers, a one was a hairdresser, one was a factory worker. My grandfather, a carpenter, and they would talk to me about unions and what industry was like back then and to be honest with you, that’s partly what even inspired me to become an industrial relations lawyer…so it always stems back to stories that they told me,” he explained.

“I am very proud of my heritage. I actually wanted to include some more in the book, but I thought I don’t want to be too biased.”

READ MORE: The power of photography lies in the shots that capture history

It’s no surprise that his love for his grandparents has also fostered a love for his Greek heritage, having even been the president of the National Union of Greek Australian Students. With this, he understands how the Greek community has contributed to the magic of the Melbourne we’ve all come to know.

“Melbourne is a melting pot, it’s a multicultural city and I think it’s so clear that our community presence in the city is huge. There’s a huge Greek footprint in Melbourne, and it’s just evident through the culture that we brought to this city from food, to music, to language to history and work ethic,” Mr Macheras said.

One particular photo, captures the early days of this “Greek footprint” that the lawyer refers to.

“There’s a really great photo in the book of a group of Greek migrants. I think it’s in 1948 and they’re on the boat…It’s a photo of this huge family, there must be more than 20 people in the photo and they’ve got huge smiles on their faces and it’s right before the boat docked. It’s incredible to see it. And the fact that they’re just about to embark on this new life and they have no idea what they represent, and the fact that they’re going to represent a huge community that comes here.”

Continuing through his own journey of discovery, beyond the migrant smiles, Mr Macheras has uncovered a wealth of the stories that are behind so many of the photographs he has curated. Many children and grandchildren who follow the page have often at times recognised a face in the images and have commented and reached out to the page to share some insight.

“The best part of it is the outcome of the process. It’s seeing that it makes people happy…I never started this with an intention of it becoming anything and just the fact that there are stories that come out and people that recognise themselves in the photos is incredible,” he said.

“I posted a photo and a young lady said ‘That’s my grandmother’ and then it got to the point where she showed her grandmother the photo and sent me all the text exchange with her grandmother who said ‘Oh my God, am I famous?’. It was from 1970 and that is what I love seeing, that relatability is the best part of the process for me.”

READ MORE: Photography for the love of women

One of his own favourite photos is of Popi Sidiropoulos, who opened the first ever Greek-owned women’s hair salon and just so happens to depict the first ever registered advert in our newspaper.

Upon posting the photo, the young Melburnian hadn’t the faintest idea about who Mrs Sidiropoulos was, but thanks to the many Greek-Australian followers of the page who were familiar with the famous Popi, her story also came to light.

“Her husband is Theo Sidiropoulos the mayor of Collingwood, who actually became the first person where English wasn’t his first language to be elected into state parliament in Victoria. I ended up getting in contact with her daughter, Anthea, who told me ‘You’ll never believe this Chris, but she just turned 94 years old’ and she’s still alive’ and she showed her the comments,” Mr Macheras continued.

“There were thousands of people that had commented and liked it and she was just taken aback that someone had seen this photo of her from, 1957 and then not long after sadly she passed away then. It’s a sad story but I love that she got to see that someone dug this thing out of the past and there were thousands of people from Melbourne commenting on the incredible Greek contribution to Melbourne.”

While all of these images bring back a sweeping sense of nostalgia for the ‘good old days’, Mr Macheras doesn’t shy away from some of time’s harsh realities. His commitment to making sure a whole story is told, from the good, the bad and the ugly also ties in with his own sense of legacy.

“I think that we won’t know where going unless we know where we’ve been. I do love leaving a legacy behind that is about respecting the past and embracing progressiveness in the sense that, there’s some the real prejudice that comes with things from the past too, you know there was so much in the law and so much inequality and there still is today but we are progressing. I think I want my legacy to be about promoting that balance between picking the good parts of the past and remembering them and keeping them alive and at the same time, learning from our mistakes and moving forward,” he said.

“Whilst I’m so fixated on the past of this project, it really is a reminder that at the same time the future and the present is something that we also shouldn’t take for granted.” Pappou Chris Macheras, who passed away in 1987. He was was Katerini, playing the Bouzouki in the 70s Photo: Supplied 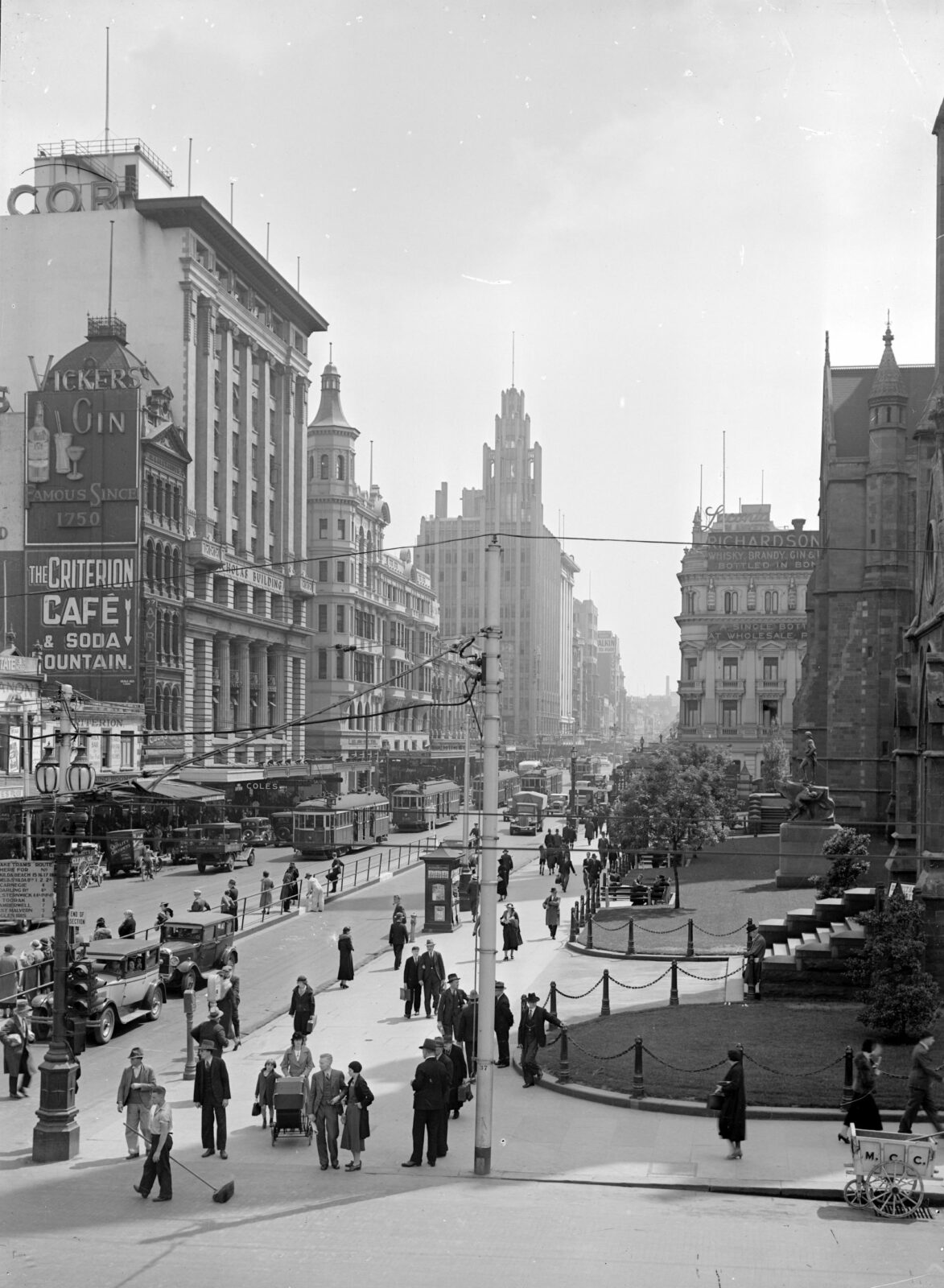 As Mr Macheras continues to share the moments captured from vintage Melbourne, he hopes he can reach more people who can shed some light on the who, what, when, where and why behind them. He also encourage others who might have their own picture perfect snaps to send them into him and help build the collection.

For now, you can find the current curation of these timeless photographs and more in the Old Vintage Melbourne book which can be found at scribepublications.com.au or by visiting any good book store.