Harmony in the centre of The Circle Orchestra 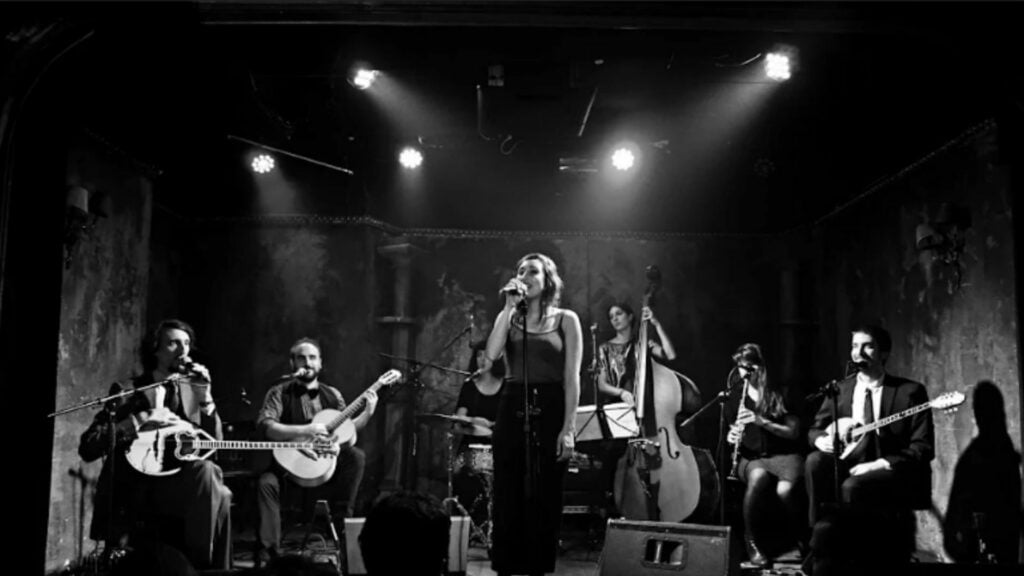 Music truly is the international language – let’s take the band The Circle Orchestra as an example. Originally formed in Paris in April 2018, what began as a homage to Manolis Hiotis evolved into an exceptional entity – celebrating and expanding on traditional and urban songs from around Greece, Turkey, Armenia, Latin America.

Inevitably, the musical melting pot resulted in their own compositions, with elements of traditional jazz, as well as traditional and emerging rebetiko music genre. They have played all over Greece, in cities like Athens, Thessaloniki, Pyrgos, Trikala, Karditsa, Xanthi, Giannena, Kavala, Amorgos, and in Europe in Paris, Brussels and Rotterdam.

How did this happen, you may ask? The band’s formation came in an organic way.
Athens-based bouzouki player Thanos Bouris gave a detailed breakdown on the uniqueness of the situation with guitarist Sotiris Letsios, vocalist Vanessa Kourtesi and bouzouki-player Panos Dimakis already acquainted and previously playing together with him in Athens. The wheels of fate started moving, however, when Vanessa moved to the Netherlands.

This, in itself, presented opportunities for the circle of friends to tour neighbouring countries. After making two videos for promotional purposes, the name The Circle stuck, not as something permanent, but just for a once-off tour.
Soon after, the group expanded with the introduction of clarinet-player Ezgi Sevgi, percussionist Ela Nuroglu and double bass player Shushan Kerovpyan – members of the exceptional Parisian band Medz Bazar and had met at an Oriental jam in Paris, culmination of two separate entities coming together – The Circle and Kouklaki.

Their inaugural performance, as a collective, was for a tribute to the legendary Manolis Hiotis… and the rest is history.

There was no denying the original energy that sparked the enthusiasm of all members, something special was there- sure, the distance between members might make it difficult, but they were all determined to make this work. Even during COVID-19 lockdowns the band still maintained their focus and forged ahead.

Their viral clip, recorded whilst separated, illustrates the undeniable chemistry that exists between all members of The Circle Orchestra.

The Circle will be live in concert in Amsterdam at Mezrab during February, with more dates across Europe and a new recording scheduled for 2022.

Their Youtube channel includes a number of clips. Personally, I’ve lost count the amount of times I’ve watched their clips. You will too.

Con Kalamaras is the Co-Director of the Greek Fringe Festival.