Being the first: Q&A with rhythmic gymnast and Olympian Alexia Aristoteli 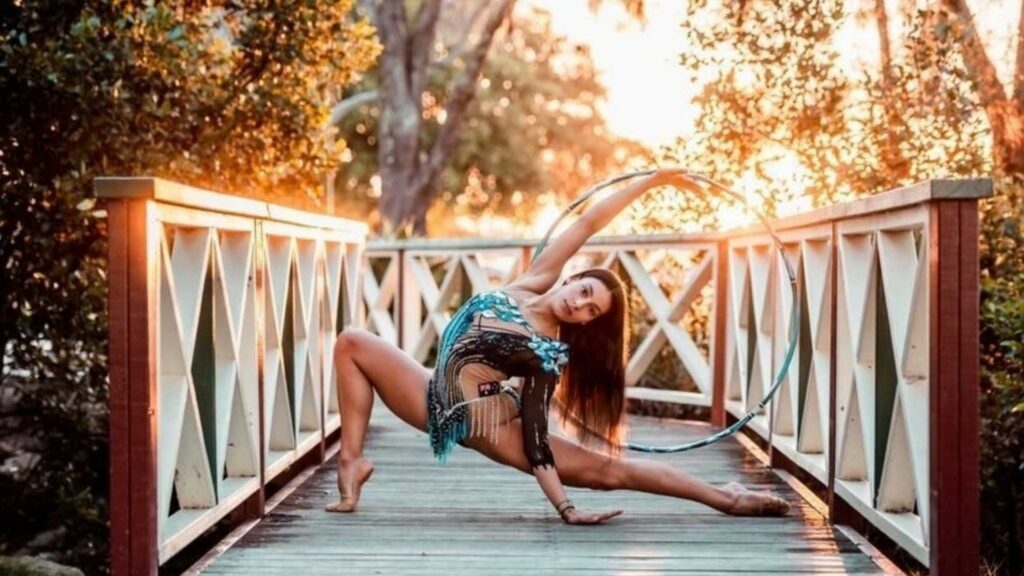 Alexia Aristoteli was on the first ever Australian team to make it to the Olympics for rhythmic gymnastic Photo: Supplied

Alexia Aristoteli has already etched her name in history, having been a part of the first every Australian team to make it to the Olympic Games for rhythmic gymnastics.

The 24-year-old distinctly remembers the moment the scores from the qualifying event were announced.

“There were a lot of tears. The qualification process was a bit lengthy. We had our qualification in May, but we didn’t actually find out if our scores had been approved until around June or July, so only a few weeks before we actually left for the Games,” Aristoteli told Neos Kosmos.

“On the actual qualification day in May there were definitely a lot of tears because we were so happy and proud of ourselves, but it didn’t feel real until they announced it and got our tickets with our names on them and our kimonos.”

Her journey to Tokyo may not have even occurred, had her exit from her ballet career not unfolded. While the door on her dancing days closed behind her, she revisited the door that led her to an Australian first.

“I think my biggest injury was when I broke my first metatarsal and that actually ended my ballet career so I felt a bit lost. Not knowing what to do after my ballet career, and because of that, I think it was around about 2016 when I realised that rhythmic gymnastics is what I want to do and get to the Olympics,” Aristoteli said.

The gymnast’s sheer determination, and above all, resilience comes back full circle to her mother, who she calls her “superwoman”.

“She raised three daughters all by herself. I think she’s who I get my tenacity from. Not once have I ever seen her take break from life, she just keeps going and doesn’t stop even if she’s sick. She keeps going because she loves what she does. I really aspire to be like her and to be as passionate as she is when I set out to do what I want to do.”

Aristoteli talks new ventures, the challenges of timing and the importance of enjoying every moment.

What drew you to gymnastics?

I had a break from rhythmic for a few years because of my ballet commitments, travelling overseas and different companies, but I found my way back to rhythmic gymnastics.

It’s game day, what do you do to get in the zone before the competition?

I’m very specific with my pre-competition ritual. It seems pretty weird but I always listen to Eminem. I put some Eminem on and I always have a sing along. I do my makeup and have some breakfast. Eminem is really my hype up. My stavro (cross) is always on my neck and every competition I have to tape it to my chest because I don’t want to take it off, so even at the Olympics I taped it to my chest. I also have a prayer bracelet, a little black one and you can see that I’ve got it on all the photos. Those three things, if I don’t do them, I know I’ll have a bad day.

I like any hype up music. Any Eminem song is great. Some good dance music and some indie music as well. I’m not too fussy with my music as long as there’s some Eminem in there.

What do you find most challenging about rhythmic gymnastics?

It’s always challenging, you never actually master the sport. It’s something that keeps on evolving and gets harder every year.
I think everyone, not necessarily struggles in competition, but finds competition a little bit difficult, especially with nerves.

With rhythmic gymnastics, you’ve got apparatus flying all around, so not only do you have to worry about your body work and your presentation, you also have to worry about apparatus not dropping, not going outside the floor area, being on time with the music. There are many aspects of rhythmic gymnastics that are quite difficult and some people don’t realise how hard it is until they actually watch it and understand how hard we have to work to get all of these things perfect.

I think we do a good job of making it all look pretty and easy which is why people say, ‘oh look, the girls in the sparkly leotards, with the ribbons’. Sure we look pretty, but what we do is very difficult.

Definitely the Olympics, without a doubt, the Olympics. We did the World University Games in 2019 and we were also the first Australian group to compete there. We had a lot of firsts in our career which was really nice. It’s always nice to be the first, to do something people look up to you for. Those have been the two top highlights of my career so far.

How has rhythmic gymnastics impacted your life?

It’s taught me so many valuable lessons; courage, strength, compassion. And so many valuable life lessons like punctuality, having goals, so I’m really grateful that I have been involved in such an intense sport because I think I’m more mature than most 24-year-olds. Many of them are out partying, which I totally get and I love party too, but it is really nice to have goals and see your hard work pay off.

What is something you learned about yourself through rhythmic gymnastics?

I can do anything no matter how down times can get I can always push through it and see the other side. I think that’s a really big thing for rhythmic gymnastics and all elite sports, that no matter how many times you get knocked down, you can always get back up and keep trying. It definitely applies to life and how you get back up on the horse and grow stronger.

I work at a fruit shop! My boss is Cypriot and he’s a really good family friend. I’ve been working there for a few years now. It’s kind of a nice getaway, where I don’t talk about gymnastics.

Favourite way to unwind after a competition?

My teammates are my best friends, so it is really nice after we’ve gone through so much together to just sit back and have a nice dinner or party and just be with them as friends, not just as teammates.

Again, my modelling career. It’s something different. It’s a new venture and I can’t wait to kick start it and take a step back from the gymnastics community in that way. I started coaching so that’s a long-term goal of mine, to coach a team to get to the Brisbane 2032 Games, but in the short term I’ll focus on modelling. I’ve been interested in it for a long time now, so it’s nice to just have a career change.

The person that enjoyed every moment. I know there’s a lot of athletes out there who do it [compete] because they feel like they have to or to prove something, but I always say ‘go there and be as happy as you can in every training session’, so I want people to look back and say ‘she was happy, she liked it’.

I know we’ll always be remembered as the first too, which is very special and I’m super honoured to be a part of the first Australian team to go to the Olympics.