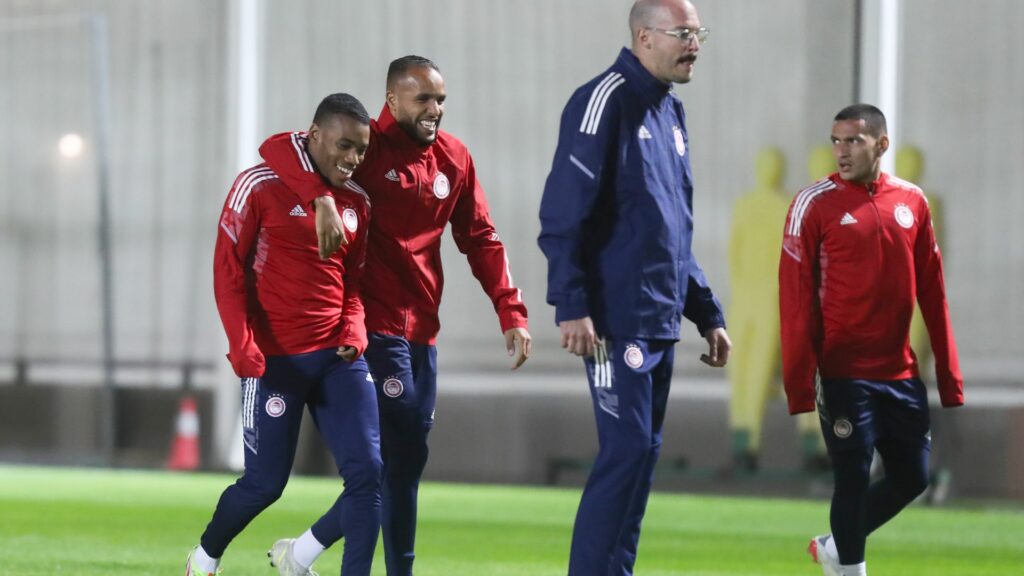 Aguibou Camara, left, is having a laugh with Olympiacos top scorer Yousef Al Arabi, during training ahead of the Red and Whites' key Group G Europe League clash with Fenerbahçe at the Karaiskakis stadium on Thursday evening (Greece time). Olympiacos lie second in the group on six points while Fenerbahçe are just a point behind. Photo: Marcos Houzouris/Eurokinisi

Media speculation is rife that a number of English Premiership clubs have expressed an interest in Olympiacos’ midfielder Aguibou Camara who opened opened the scoring with a bullet within a minute of the start of Sunday’s Athens derby against AEK.

One of Britain’s top-selling newspapers, “The Sun”, reported that Liverpool, Leicester and Newcastle have all approached the 20-year-old Guinean player’s agent to broker a move ahead of the January transfer window. There was also interest expressed by Monaco and Bologna as well as Spanish clubs Valencia and Villareal.

In July Camara joined Olympiacos from French champions Lille having played just one game for their senior team.

In his 17 appearances for the Red and Whites so far, the attacking midfielder and sometimes winger has come into his own having scored five times and provided two assists.

READ MORE: Olympiacos break loose at the top after 3-2 thriller against AEK

He has consistently impressed as a versatile all-round midfielder who, though small in size, is athletic and strong in the tackle. He is a good end-to-end player with good ball-carrying skills. One source was quoted as saying that Camara was “one of the most exciting talents in Europe right now.”

Currently valued at around €3 million, Olympiacos president Evangelos Marinakis was reported to be seeking at least $27 million (USD) for the player, a figure that could go even higher if the player continues to impress in the forthcoming Europa League clashes against Fenerbahçe and Royal Antwerp respectively.