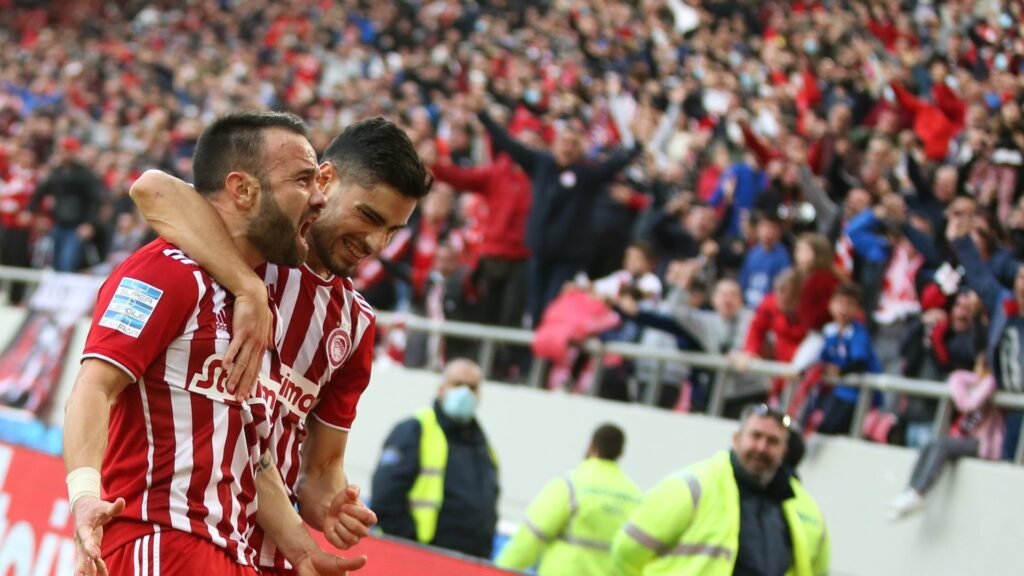 Mathieu Valabuena reacts after scoring the winner against Volos one minute into extra time on Sunday. Olympiacos opened the scoring through an 85th minute penalty only for Volos to equalise through Tom van Weert one minute from time only for Valabuena to deliver the killer blow barely a minute later. Photo: Klodian Lato/Eurokinissi

It was business as usual for the top teams in Greek Superleague over the weekend as Olympiacos and AEK won their matches with late winners while crowd problems in injury time stretched the game by 50 minutes in a Thessaloniki derby.

Daniel Mancini of Aris struck late in the first half to give his team a 1-0 win over PAOK and that was the way it remained until the 92nd minute when PAOK fans hurled flares and other missiles on to the pitch and ripped up stadium seats. What was left of the game resumed 50 minutes later but there was no changing the result at the Toumbas Stadium.

The result sees Aris seventh on the table. PAOK stay in third on 19 points and four behind AEK Athens.

AEK had travelled to Epirus to take on Pas Giannina in a tightly contested game whose outcome was only settled in the 90th minute. The hosts opened the scoring with a Rodrigo Eramuspe penalty in the fifth minute of the game only for Nordin Amrabat to give AEK the equaliser just four minutes later. The deadlock remained until Yevhen Shakhov found the winner in the last minute of full time. After last week’s defeat to Olympiacos, the win ensured AEK stayed in second place on 23 points.

READ MORE: Olympiacos break loose at the top after 3-2 thriller against AEK

Log leaders Olympiacos kept up their winning ways but only just in their encounter with Volos. Up until the 85th minute, the game was goalless then the visitors handed Olympiacos the lifeline of a penalty that Youssef EEl-Arabi converted. Volos soon found a response through Tom van Weert who scored  two minutes from time. Mathieu Valbuena delivered the dagger thrust one minute into extra time that give Olympiacos the victory at 2-1. The Red and Whites stretched their lead at the top of the table to 29 points, six ahead of second-place AEK.

Panathinaikos took the honours in their encounter with Panetolikos with Federico Macheda converting a penalty and then scoring in the 66th minute. The result has moved the Greens to fifth on the log a distant 12 points from Olympiacos at the top.

OFI beat Ionikos 2-1 thanks to a Felipe Gallegos goal two minutes before half time. Ionikos’ Aias Aosman equalised soon after the break but a penalty in the last minute of full time which was converted by Lazaros Lamprou settled the matter in favour of the Cretan team.