The ABC of Christmas

It is usually at the term of the season that the familiar lament takes place: Christmas is just an excuse to sell things. It is overhyped. It is a day in which you stuff your face and then lie torpid for the rest of the day. It is focused on presents. It expresses a capitalist malaise and a consumerist ethos that is behind the ills that bedevil our planet…

The traditional Greek-Australian Christmas has often been described as all of those things. An over-emphasis on cooking (and these days via social media, posting the results of such culinary endeavours in order to provoke the envy of all), a time when enforced family gatherings exacerbate the dysfunction and bile brewing between family members for inordinate periods of time and often result in arguments and feuds, or of passive aggressive non-communication, often stemming from a dissatisfaction as to the market value of the present proffered.

Yet it was not always this way and while few members of the first generation were able to pass down the richness of the traditions and customs of Christmas to the latter generations, an increasing number of second generation Greek-Australians are looking back at mainstream Australian Christmas (which has also departed from its rich roots) and its close counterpart, Greek-Australian Christmas and rejecting on the one hand its hollow and clichéd nature and on the other, its complete irrelevance to the traditional Greek discourse and mindset altogether.

Instead of white Christmases, Jingle-Bell Rocks and Παρεξήγηση, these younger generation Greek-Australians, especially those who are parents, are seeking to provide more meaningful and culturally appropriate festive experiences for their offspring, ones that are in keeping with their broader endeavour to cement a Greek identity for their children that goes beyond stereotypes, is practical, rather than theoretical and is grounded upon lived experience. In order to do so, many are going back to the basics in order to ask fundamental questions: What is Greek Christmas? How does it differ from any other sort of Christmas and why? What are its constituent values? How are they expressed? What relevance do they have to our lives in Australia today? Enter Panagiota Andreadakis, author of what has now become a Greek-Australian classic: “The ABC of Greek Easter,” with her recently released bilingual: “The ABC of Christmas.” The Greek parallel title reads «Η αλφαβήτα του Δωδεκαήμερου των Χριστουγέννων». From the title alone, the author subtly asserts the difference between the two Nativity discourses: In the Greek way of thinking Christmas is not one single day, but rather is comprised of twelve.

The Greek title is also interesting for another reason. While the author was aware that the conventional phrasing for an alphabet book would be «Το αλφαβητάριοτων Χριστουγέννων» she consciously chose a concordance with the English title, in order to better convey the structure of her narrative. There are many other sections in the book where the Greek is stretched, extended and adapted into novel and unconventional forms in order to depict a unique Greek-Australian reality, displaying just how flexible, adaptable and relevant the Greek language is, across the cultural divide. Her choice of title is at any rate reinforced by the tendency in Greece these days to also follow the English for after all, thematic ABC books of this nature derive from the English genre. The manner in which Panagiota Andreadakis transcends and melds both linguistic traditions with such virtuosity should be an example to all writers within our paradigm.
What becomes apparent as one turns the page is the almost effortless way in which the author has curated her selection of information pertinent to the Christmas feast. There is no strained or awkward attempts to stretch facts of dubious relevance around the pitiless inflexibility of the letters of the English alphabet. Instead, the author is concerned to build, via careful textual brushstrokes, a complete and comprehensive understanding of the festival, starting with the Annunciation, thus also providing children with the means to contextualise the other important feasts of the Greek Orthodox tradition, and appreciate how they are all inextricably linked.

The choice of these festivals also serves to mark the manner in which cultural norms condition the thought processes involved in considering Christmas. Rather than Rudolph, and Jack Frost, in this book, we have under the letter Π, we find an entry devoted to the «Περιτομήκαι Εορτή του Αγίου Ονόματος του Ιησού Χριστού». One would struggle to find a Christmas book in the Anglosphere that deals with circumcision, but this is the whole point of the exercise. For two thousand years, the thoughts of the Greeks at Christmas-time have centred around the birth of a little boy upon whom the hopes of the world rest. According to the Greek conception, that little boy was born into a particular context: as part of the Jewish cultural tradition, and thus partook of the ceremonies that constituted an intrinsic part of that world. Thus, while the author is providing valuable information and linking it to current practice in the Orthodox church, she is also making a point: our children have been born into a particular context and so she invites them to also partake in the ceremonies that constitute an intrinsic part of that world. Ultimately then, this is an ABC not only of faith but of identity.

READ MORE: The Greek-inspired guide to your 2021 Christmas gift shopping

This emphasis on context is further reinforced by the provision of information about the customs of Greek Christmas. Thus, there is an entry on the manner in which Greeks perform Christmas Carols, a completely different experience to Carols by Candlelight which can be tried by the family, or placed into context by participation in the carolling events held by our community institutions.

Many of the entries are provided with the troparia or apolytikia of certain feasts, in the original ecclesiastical Greek, thus providing the young reader not only with the means to participate in the appropriate church services but also to obtain a taste of the linguistic diversity inherent within the Greek language.

The entry describing the traditional Christmas bread, the «Χριστόψωμο» comes under O for «οικογένεια», implying that family, not self-satisfaction is at the centre of our festive culinary lore. This entry not only elucidates the meaning of the comestible, but also how it is made and what it is used for. The entry for the Βασιλόπιτα goes even further. It contains practical instructions as to how to cut it, who its pieces should be given to and even the proper prayer that should be recited at that time. Even though Greek traditional customs differ among themselves and each region is culturally distinct, the author’s compendious inclusion of diverse usages is a conscious one: Australia is not only a melting pot of inter-ethnic cultures but also of intra-ethnic culture. As a result, our community is a vehicle that provides a smorgasbord of rituals, observances and stories that can be appropriated, shared, adapted and given new meaning. Rather than looking elsewhere to address the aridity of the modern cultural zeitgeist, the author seems to suggest that the answer lies within and in our interconnection as a community.

What is thus ostensibly a simple but informative handbook to Greek Christmas is thus, thoroughly subversive in the manner it challenges prevailing stereotypes of ethnic acculturation. In its stead, the author posits an alternate form of multiculturalism, one where superficial state-sanctioned outward displays of identity are replaced by even more exuberant and joyous practices which are arrived at through a deep understanding of history and meaning and which are, as a result, superlatively more relevant, vibrantly heartfelt and ultimately, infinitely more resilient. 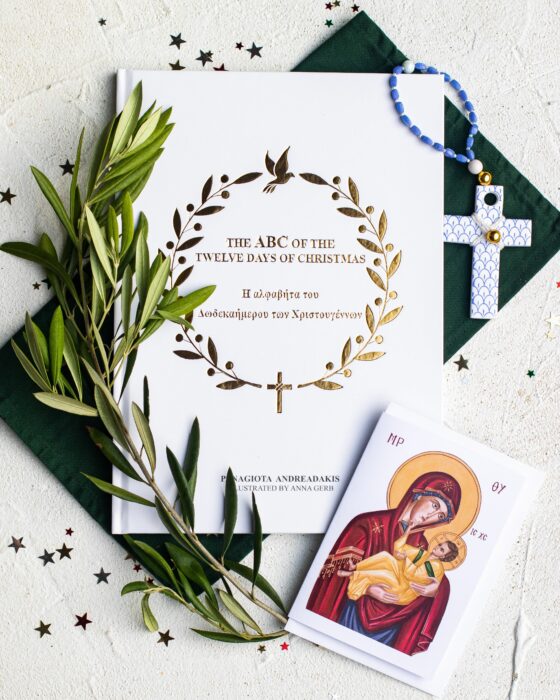 Astoundingly, all of the above is infused within a text that is light, engaging and fun to read. The accompanying illustrations by Anna Gerb are endearing and do much to bring the text to life and in keeping with her didactic purpose, the author has also planned some further educational resources in order to further captivate readers.

In producing such a thoughtful and considered work that will appeal to children of all ages as well as their parents, Panagiota Andreadakis deserves our gratitude. Books of this nature, written by parents concerned about the absence of specific Greek-Australian literature targeted to their offspring, constitute a historic shift in the manner in which our identity narrative is determined and by who. Having the sensitivity and foresight to embark on such a worthy and necessary project, Panagiota Andreadakis’ publication is a must have in all Greek-Australian homes, this Christmas.