Following a 12-month delay due to the COVID-19 pandemic, Ancient Greeks: Athletes, Warriors and Heroes opens at the National Museum in Canberra as the nation emerges from lockdown National Museum of Australia Director Dr Mathew Trinca launching the exhibition, and right the statue of Nike at the entrance of the exhibition in Canberra. Photos: Fotis Kapetopoulos

A once-in-a-lifetime exhibition opens in Canberra tomorrow showcasing the competitive spirit of the Ancient Greek world.

Ancient Greeks: Athletes Warriors and Heroes display was launched at the National Museum of Australia on 16 December and runs through to May 2022.

By bringing the world of the Ancient Greeks to life through the sculptures, friezes, pottery and jewellery, the exhibition presents an “opportunity”, Dr Trinca told Neos Kosmos.

“It is a great opportunity to bring this collection here, at a time when most of us would find it nigh impossible to get to Greece itself,” he said, adding that “if you can’t get to Greece, we can bring the Ancient Greek world to you”.

Dr Trinca said the display is a “celebration of Greek culture and history, seen through that prism of competition, which informed all the aspects of the ancient Greek world, including childhood, sport, heroes, the afterlife, drama and music.”

British Museum Director, Dr Hartwig Fischer, acknowledged the Fist Nations people of Australia then waxed lyrical about the exhibition during a prerecorded message from the UK.

“I’d like to knowledge that this opening is being held on the lands of the traditional custodians and I pay my respect to elders past, present and future,” he said.

“This wonderful exhibition is the result of tireless efforts and contributions made by staff at the National Museum of Australia, the Western Australian Museum Boola Bardip, the Tāmaki Paenga Hira Auckland War Memorial Museum, and the British Museum. The exhibition has been many years in the making and the British Museum is extraordinarily proud of this partnership. We hope that audiences in Canberra will enjoy and be inspired by the magnificent objects and stories woven throughout the Ancient Greeks exhibition,” Dr Fischer said, attesting to the relationship between the NMA and British Museum through this, their fourth collaboration.

“And the beautiful objects illustrate the spirit of competition so prevalent throughout ancient Greek society,” Dr Fischer said. “Whether in the field of sport, drama, warfare, politics or everyday life, the ancient Greeks were well known for their competitive nature but these activities were often underpinned by conflict competition was also positive and unifying force.

“The exhibition catalogue includes over 170 objects which were discovered ancient cities and settlements across the ancient world are emblematic of the vibrant world of the Ancient Greeks.”

READ MORE: The Greeks are coming 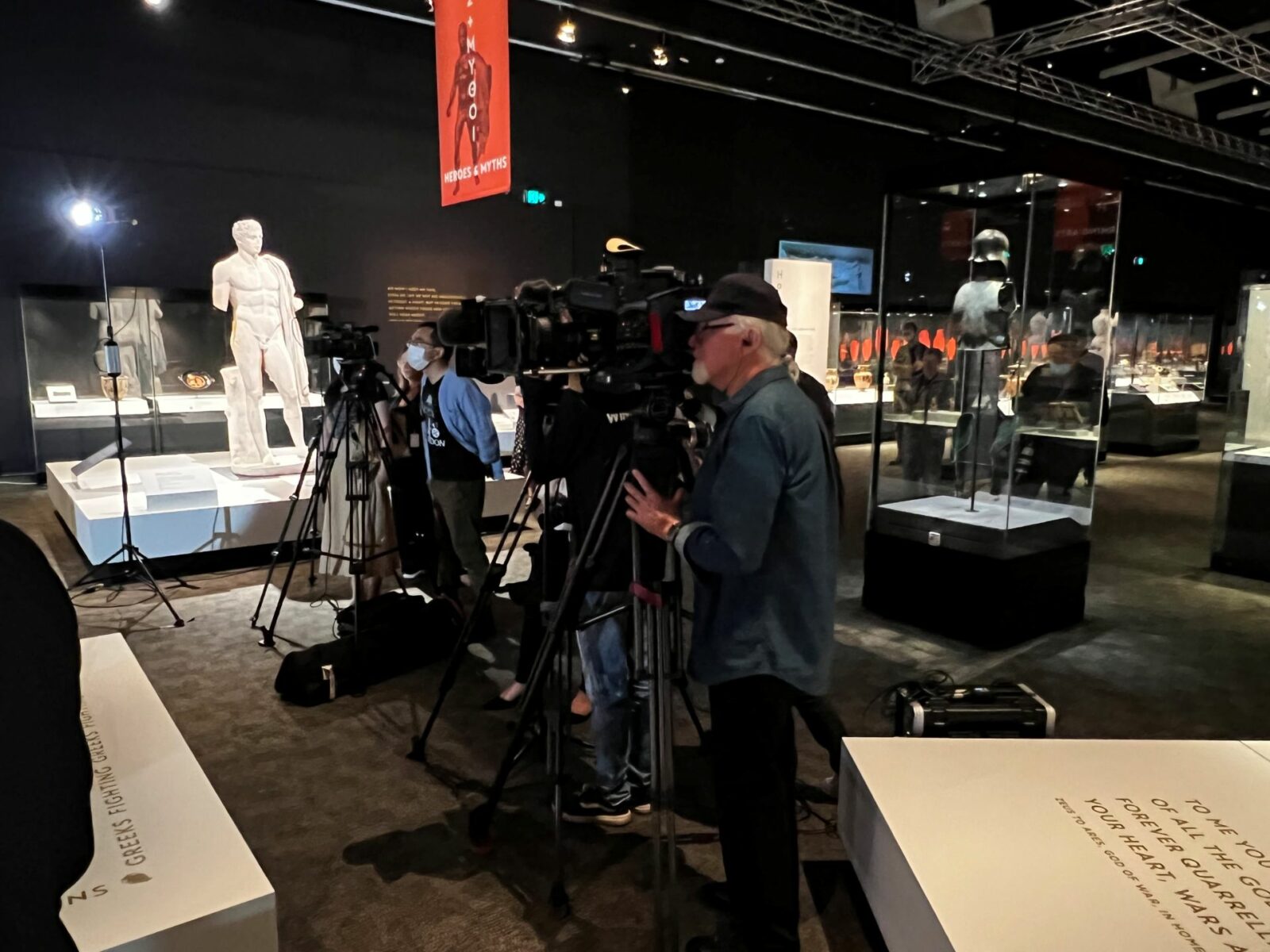 Scene from the opening of the exhibition Mr Loukadellis reflected on the powerful “matriarchs” in his family – his grandmother and mother – and how their images were conjured when being greeted by the winged statue of Nike – a work which is still a feature of our athletic life.

“I always knew that I had to always look after my mother and also the matriarch of our home, my grandmother, so I find it very fitting, respectful and amazing that as we walk into this amazing space today, the first piece that greets us is the goddess Nike, the goddess with victory,” he said.

“The exhibition brought back so many memories of my childhood as I’m sure it will to many Greek Australians who come to this amazing event this exhibition.”

READ MORE: What were the attitudes to disability in ancient Greece?

Mr Loukadellis said that, like many Greek children, he would hear stories from his grandmother about the Minotaur and she would say to him “be like Theseus save people from the dark.”

Dr Withycombe emphasised the “important role women played” in Ancient Greece even though they “often did not tell their own stories.”

“We have so many glimpses of the life of women in Ancient Greece in this exhibition like the two terracotta figurines of women playing knucklebones, the elderly woman nursing a baby, and the colossal architectural fragments that helped me understand the story behind Artemisia who helped complete one of the seven wonders of the Ancient world the Mausoleum of Halicarnassus”

Ms Cheyne said: “As part of the ACT Government’s ongoing commitment to the tourism, events, arts and cultural sectors, we are very pleased to be supporting the National Museum of Australia in staging this exhibition. The welcome return of blockbuster exhibitions will play an important role in the social and economic recovery of the Canberra region – and provides yet another great reason for our interstate visitors to organise a trip to the nation’s capital.”