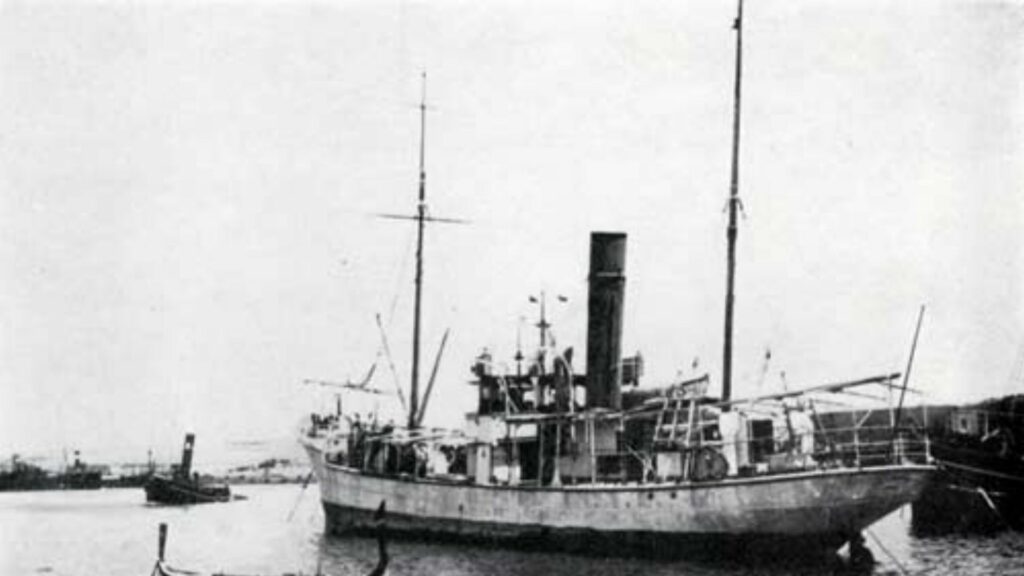 For many years now I have been researching and writing about the Hellenic link to Australia’s Anzac story. The roots of this link can be found in the role of the northern Aegean Islands of Lemnos, Imbros and Tenedos in the Gallipoli campaign. This had a reciprocal impact through the interaction of two peoples – Australians and Hellenes –creating a legacy which endures in the archives and folk memory of both countries.

I have written on the Hellenes who volunteered to serve alongside the Australian and other Allied troops at Gallipoli, whether as soldiers, intelligence officers, guides or labourers. Today I recount the story of others who came to assist the Allies – the Hellenic sailors of the merchant marine.

The Allied campaign was supported by a fleet of former civilian vessels pressed into service during the campaign. They would bring the essential supplies to the frontline bases, sailing across the Aegean and back again, these unarmed or poorly armed ships facing enemy attack from artillery and snipers on land and submarines, surface boats and aircraft at sea. The seafarers of Greece, inheritors of its proud naval and sailing tradition, would now volunteer for service on these vessels in support of the Allied fleet.

One of these civilian vessels was the Cable Ship Levant II, along with her sister ship Levant I. These were ships of the London-based Eastern Telegraph Company who had provided telegraph laying and maintenance services throughout the Eastern Mediterranean for many years prior to the war. Their telegraph services throughout the Aegean were essential communication links to the outside world, from Athens and Piraeus to Constantinople and Smyrna and beyond. When the Allied troops first came to Lemnos in March 1915, Australian troops came across the telegraphic office in the capital Myrina, operated by Eastern Telegraph Company staff. There may well have been such an office on Imbros too.

The Levant II began its life as a steam trawler built in 1904 by George Brown and Company of Greenock, Scotland and was subsequently purchased by the Eastern Telegraph Company and re-fitted as a cable-laying vessel. She was re-named the Levant II, joining her sister ship, another former steam trawler also built in Scotland named the Levant I. The former was the larger of the two, with a gross tonnage of 283 compared to only 141 for the latter.

It was when I was reading the ships log of the seaplane carrier HMS Ark Royal as it lay at anchor in Imbros’ Kephalos Bay during the Gallipoli campaign that I came across the Levant II and its connection to Imbros. The log records that they sighted the Levant II sailing into Imbros’ Kephalos Bay at 7.15pm on 29 July 1915, in the middle of the Gallipoli campaign. She would come to Imbros’ waters for a total of 50 days between May and January 1916

July was a busy month at Kephalos Bay. The HMS Ark Royal recorded some 45 major Allied ships coming and going from the harbour, not to mention the myriad other smaller vessels that would have also been there – picket boats and pinnaces, trawlers and lighters. And sailing amongst this flotilla would have been many of the local Greek caique boats, darting about the harbour. Some no doubt would have been going about their normal activities, but many were offering goods for sale to the eager sailors and soldiers aboard their ships.

How surprised was I to discover one of the Levant II’s crew lists from the period, held by the UK’s National Maritime Museum. The list was drawn up in early September, listing all crew recruited for service on the ship between 1914 and December 1915.

Along with its UK crew which included 36-year-old Captain Harold Wightman from South Brent and 28-year-old Warrant Officer Alfred Lawrence Spalding from Liverpool (who also kept a unique diary of the Gallipoli campaign) were crew members recruited from the ports of the Mediterranean into which she had sailed. The crew list reveals that the majority of these were Hellenes, no less than 35 out of the 51 crew members listed. Six Hellenes joined at Malta on 3 September 1914, 23 at the major Greek port of Syra (modern Syros) in the Cyclades on 7 June 1915. The Levant II then made a call into Tenedos, where two more joined the ship on 15 April 1915 and again on 1 August 1915 when four more Tenedos sailors joined.

These Hellenes had greater or lesser periods of service at Gallipoli aboard the Levant II. The longest were 40 year old Fireman Mr E. Tzouvelekis from Syra and 26 year old Able Seaman Mr V. Koutsofihos from Santorini, who joined the ship in September 1914 and remained until they left on 23 November and 23 December 1915 respectively.  The other Hellenes left the Levant II between June and August 1915.

As the ship entered Kephalos Bay on 29 July there appear to have been twenty Hellenes aboard. Warrant Officer Spalding’s diary records that the ship stayed anchored in the Bay until 31 July, delayed by bad weather and coming ashore to lay the shore end of a new cable. They returned to Kephalos Bay on 5-6 August and again on 8-9 August. Along with its fireman hailing from Santorini, another fifteen of these Hellenic sailors who came to Imbros hailed from Syra and most of these were Seaman like 23 year old Louretzos Koelakis and 40 year old Pantelis Sigalas. 29 year old Dimitrios Lekakis joined as a Fireman and 18 year old Georgios Katevatis as a labourer.

I wonder how those Hellenes aboard the ship who came to Imbros’ Kephalos Bay in July interacted with the locals. Did they go ashore to help with the cable laying on 31 July? Did they visit the villages and people of the island as so many Allied soldiers and sailors did? Did they purchase any of the bread made by the Australian Army bakers at Kephalos? They certainly would have been able to assist the non-Hellenes aboard the ship in communicating with the locals. While the records are silent, one can assume that interaction took place.

As I have said two of those who came to Imbros in early August hailed from the nearby Island of Tenedos – 40-year-old Spiros Zacharias and 29-year-old Constantin Demetriou, both Able Seaman. I wonder what these two sailors thought when they sailed into Kephalos Bay. Being local seafarers, they were probably familiar with the Bay and the people of Imbros. Did they shout out to the locals in their caiques in a familiar sounding dialect?

The remaining Hellenes – including the four sailors recruited at Tenedos on 11 August, 21-year-old Seaman Constantinos Theodorou, 24-year-old Seaman Constantinos Karafilido, 24-year-old Seaman Charalambos Kontalianos and 21-year-old Seaman Themistoklis Papadopoulos – do not appear to have come to Imbros. But they were aboard as the ship sailed into Lemnos’ Mudros Bay and to Tenedos as well as the dangerous waters off the Gallipoli peninsula at Suvla, Anzac and Helles.  They left the ship on 23 August when it was at Syra, along with ten of their Hellenic comrades, all from Syra. After that date, only two Hellenes remained aboard. There were at least two other occasions – 21 September and 17 October – when these Hellenes may have come ashore as part of the ships shore parties on Imbros recorded on these days.

The Hellenes serving on the Levant II undertook a dangerous task, facing enemy shelling and sniping as they worked to establish and maintain the vital communications of the campaign.  On 13 November one of the Hellenic sailors, a fireman, possibly 30 year old Mr E. Tzouvelekis from Syra, had his “arm nearly taken off” as a result of enemy shelling as he fished over the side. As the ship ended its Gallipoli service in January 1916 it was repeatedly shelled off Cape Helles.

The service of these telegraphic workers during the campaign was well regarded at the time, four being Mentioned-in-Despatches for their service at the Dardanelles and Captain Harold Wightman, the Distinguished Service Order, the award citing his rendering “good services in connection with laying of the cable from Imbros to Suvla on the night of the Suvla landing, and in laying and repairing cables off the peninsula frequently under heavy fire.”

And what of the Levant II? After the end of the First World War, she would return to commercial cabling service and despite being based in Malta during the Second World War, did not see war service. In 1952 she sank three miles off Malta. The Levant I would have a more military future. After being sold to Greek owners after the war and re-named Kythira, she was commandeered by the Greek government for use as a boom patrol boat, then sunk due to German air attack, salvaged and pressed into German service for coastguard work during the occupation, before being sunk again at Volos in 1944. It was salvaged again after the war and returned to life as a commercial vessel as the Kythira.

We know of at least one other civilian vessel that sailed into Kephalos Bay during the Gallipoli campaign with some Hellenic crewmen. This was the SS Linkmoor which operated as a collier and is recorded as being at Imbros in July 1915. Amongst its 34 crew were ten Hellenes, including one 25 year old sailor Socrates Germenis. Sadly, the Linkmoor was sunk by a German submarine off southern Greece in September 1915 as she sailed from Lemnos to Malta.

While these are surely not the only Hellenes serving on Allied merchant ships during the Gallipoli campaign, the story of the Levant II and its Hellenic crew is more evidence of the Hellenic link to Gallipoli. Along with all those other Hellenes who assisted in the Allied land forces, we should remember those of the Levant II. In keeping open Allied communications open they played a vital role in the whole campaign. Lest we forget.

Jim Claven is a trained historian, freelance writer and author of Lemnos & Gallipoli Revealed: A Pictorial History of the Anzacs in the Aegean 1915-16, as well as many articles. His is currently researching the role of the northern Aegean Island of Imbros in the Gallipoli campaign and working with Melbourne’s Imvrian Society on a archival photographic exhibition and associated publication. He thanks Ms Liza Koutsaplis of Athens and Lemnos for her assistance with his research. He can be contacted at jimclaven@yahoo.com.au