“During my journey from Ghana to Greece, I realized certain fundamental needs that people have that are not being met. Like education, health, food, and shelter. So I decided I wanted to help in one of these fields and I realized that health was a good option to consider”, says Boye. 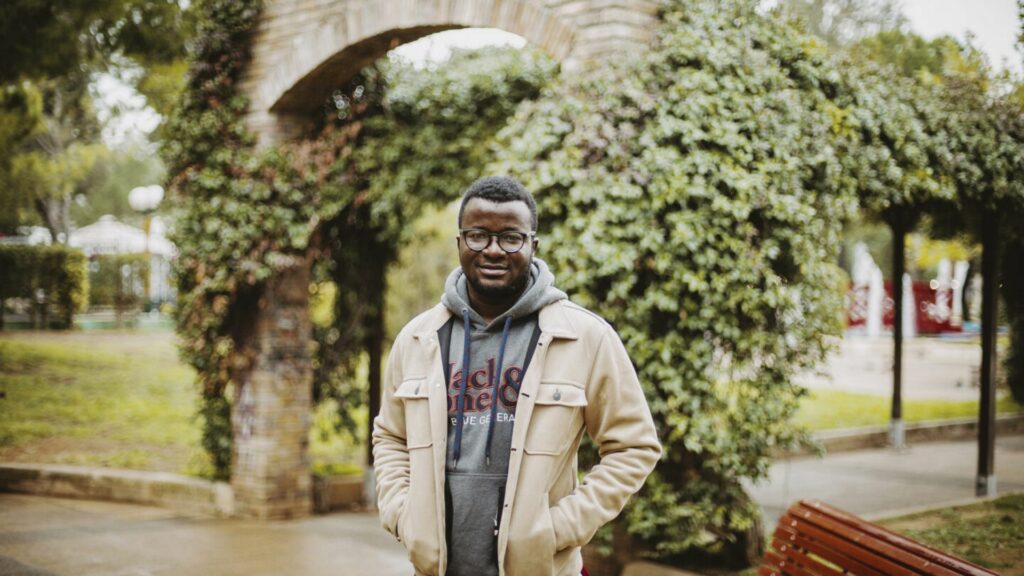 Boye was forced to flee his home in Ghana in 2016 when he was just a child, alone. Fast forward five years and he is now studying Biomedical Sciences in Deree, the American College of Greece. Thanks to a fully funded four-year scholarship provided by the College, he is now one step closer to his dream of becoming a doctor.

“I want to be someone who can help. During my journey from Ghana to Greece, I realized certain fundamental needs that people have that are not being met. Like education, health, food, and shelter. So I decided I wanted to help in one of these fields and I realized that health was a good option to consider” says Boye.

When Boye began his journey, he never imagined the difficulties he would face along the way. Travelling across the well-known smuggling routes of West Africa, Boye traversed Togo and Benin and found himself in the desert in northern Niger, forced to work without pay for several months in Agadez and Dirkou.

When he finally departed Niger for Libya, the truck he was travelling in lost its way in the desert. Without food and water, he watched many perish. “Our food and water ran out and we lost a lot of people from sandstorms and from hunger” he says, recalling the harsh reality of the journey. He was lucky to be picked up by passers-by and continued to Libya.

He, like many before him, was passed between different groups of traffickers. For those who could not pay what they asked, they were brutally tortured, forced to work without pay and sexually abused. He was kept in a “warehouse” or forced to work outside until he finally reached Tripoli.

From Libya, after more than a year of confinement and abuse, he finally boarded a cargo ship towards Turkey. In Turkey, he was once again abused and forced to work, but after two months, he managed to escape and to find others who were on the move towards Greece. He boarded a flimsy rubber dinghy and found himself on the shores of Lesvos island in 2018.

Despite the challenges he faced in Moria, he was determined not to allow his past experiences to determine his future. He immediately got involved in as many activities as possible. He was placed in the section of the camp of Moria dedicated to unaccompanied and separated children, where he was supported by a case worker of the Greek Reception and Identification Service. He began to volunteer as a football coach with an NGO and started taking non-formal classes. Within a couple of months, he was empowered enough to become the first unaccompanied child in the camp who enrolled in the local Greek public school.

He had to take the public bus from the camp to the local town to attend school. “It was difficult at first, we didn’t have lessons in the basics of Greek before we were put in the normal class with Greek kids, so I had no idea what the teacher was saying. But I still went to the school every single day” says Boye.

While Greek support classes were not available in his school, in parallel, he attended Greek lessons offered by the NGO METAdrasi on Lesvos, with UNHCR’s support, and made huge strides in improving his language skills. Globally, just 34 per cent of school aged refugee children are enrolled in secondary education.

He was then referred from the camp to live in an apartment in the town, which made attending school easier. He also started working as an animator and then as a trainer for younger refugee children at the same NGO where he initially attended classes, so he was busy from dawn until dusk. “I didn’t want to have time to think about things that would make me stressed or things that would not give me the motivation to focus on the positive things in my life” he says.

He attended school and finally managed to complete the vocational high school and participate in the national university entrance exams in September this year despite the challenges of the COVID-19 pandemic. While waiting confirmation on his final exams scores, the mother of a friend of his who was working for the Greek Council for Refugees encouraged him to also apply for a scholarship to continue his studies. She helped him to contact Deree, who allowed him to sit an English placement test. He shared his academic reports and was accepted to begin the four-year scholarship in Athens this year.

Deree – The American College of Greece has been providing scholarships to refugee students since 2017. There are 20 students currently enrolled in this programme, “Education Unites.” Students are following courses in fields ranging from Aeronautical Engineering to Psychology, Philosophy, Communications, Film Studies, International Relations, Finance, Economics, and International Business.

“We have had two refugee scholars graduate with Master’s degrees in Business, one in Strategic Communications, and one with a Bachelor’s degree in Sociology. Another student will graduate this spring with a degree in Finance” said Kathleen Macdonell, coordinator of the scholarship programme.

Boye is extremely grateful for the opportunities he has had and for the people who have supported him to reach this point, including a Greek American family who have committed to providing him with financial support. However, it hasn’t always been an easy experience to integrate.

When searching for an apartment to rent he says “I would make a lot of phone calls and I would speak Greek. But when I would go to meet them in person they would ask why I didn’t tell them that I was black or a migrant. What difference does it make?”. Unfortunately, much remains to be done to combat prejudices and discrimination against refugees and migrants in Europe.

However, Boye is enjoying the University environment and the diversity in the classroom. He is now living in Athens with two more refugees who are also studying at the American College of Greece. He began classes in October and is particularly enjoying his English writing class.

He prepares in advance and is an active participant in all of his classes, which makes it easier to make friends and to integrate. He is very aware that he is amongst the very small minority of refugees who have the chance to continue to third level education – now just approximately five per cent globally.

“I have all the motivation I need to push me to study more and to succeed. I don’t consider myself smart or intelligent but I have the passion and the dedication to do this. Because of where I come from, I know how important this opportunity is… I don’t know what the future holds, but I feel comfortable here, I feel like I’m home,” he says.