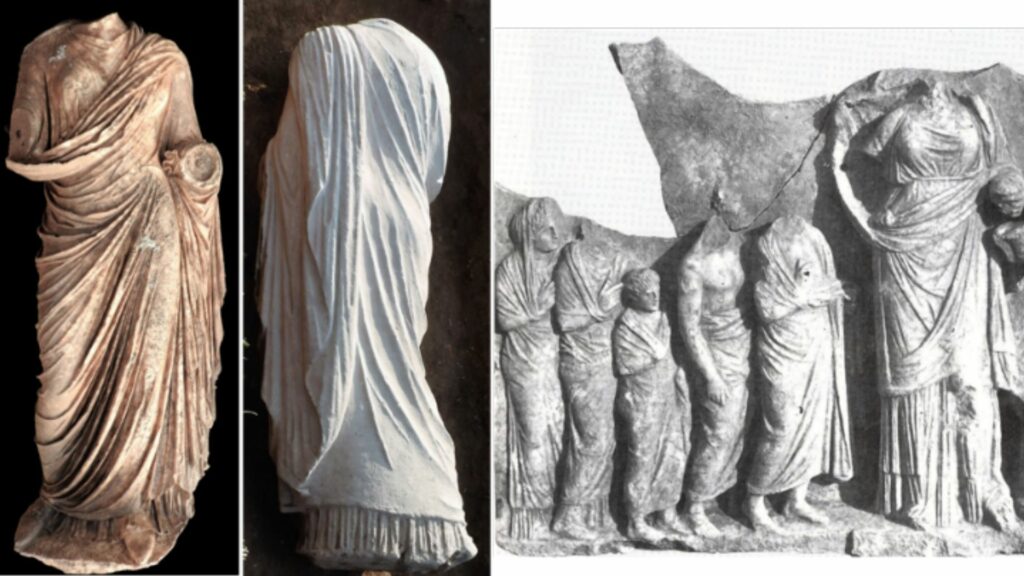 A high-quality marble statue of a woman was found near excavations at Ancient Epidaurus’ agora area, the Ministry of Culture said on Thursday.

The statue was discovered on December 16 and is missing its head and hands, which had been attached separately to the main body.

Although excavations had ended for the year, the ministry said, “the intense rain in the past few days cleared a section of the statue’s back side in the perivolos area, where work has not reached deeper levels yet.” The area around the statue was dug up after communication with the head of the Ephorate, Alkisti Papadimitriou.

The ministry said of the statue that it depicted a woman wearing a full-length chiton and a himation, the latter of which was fastened on the left shoulder and arm, and hung down in thick layers. One of its ends crossed over behind the back, under the right armpit, and was depicted as folded diagonally toward the back, over the left shoulder.

On the spot where the right arm would have been attached, marks reveal that the figure made the gesture of discovery – a movement to lift the himation with the right arm out and over, a gesture that denoted a married woman. The gesture was often shown in statues of the health goddess Hygeia, daughter or wife of legendary god of medicine Asclepius.

“Preliminary evidence shows the statue belongs to the Roman Empire era,” said the ministry, adding that following its discovery it was transported to a storage area for cleaning, restoration work, and storage.

Ancient Epidaurus’s sprawling site has been excavated most recently (since 2015) by the University of Athens, with the support fo the John S. Latsis Public Benefit Foundation.