COVID-19 kills another 26 Greeks in Melbourne

“We feel completely abandoned, at the mercy of God. We are isolating at home so we won’t infect other people, and we try to recover on our own”, Mr Mavraganis tells Neos Kosmos Paramedics are seen tending to their ambulance outside St. Vincent hospital in Melbourne,. Demand for ambulances in Melbourne is “extremely high” with people warned to brace for delays, as COVID-19 hospital admissions continue to rise. (AAP Image/Luis Ascui)

We have sadly lost at least another 26 members of our community, due to COVID-19, within the first two weeks of the new year, with many fighting for their lives in hospitals, as more and more become infected daily with the incredibly contagious variant, Omicron.

Neos Kosmos is constantly receiving anxious messages from the Greek community, as many are suffering with symptoms at home, and are unable to find even a rapid antigen test to confirm their diagnosis.

Mr Mavraganis, a well-known teacher in the Greek community, described to Neos Kosmos, how he and his wife Nelly, started developing symptoms on Tuesday, and how helpless they felt when they were unable to find an open testing site for a PCR test, or even a rapid antigen test in any of the pharmacies in their neighbourhood. 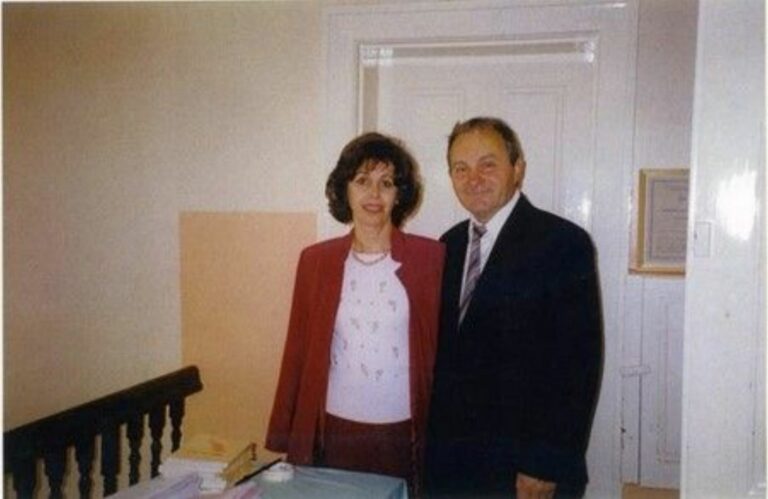 Greek couple, Vlassis and Nelly Mavroganis, is only one example of thousands of people who are suffering with symptoms at home, and are unable to confirm their diagnosis, Photo: Neos Kosmos

“We feel completely abandoned, at the mercy of God. We are isolating at home so we won’t infect other people, and we try to recover on our own”, he says, as the fact that they are not confirmed cases, means that they are not eligible to receive the government support to guide them through their illness.

This Greek couple is only one example of thousands of people who are suffering with symptoms at home, and are unable to confirm their diagnosis, which causes fear and uncertainty.

The scarcity of home-testing kits, is only one of many consequences of the “Omicron” wave which is turning out to be a disaster of a massive scale, as we have “let it rip” through the community without foresight.

The virus is nearly in every home, affecting every aspect of our lives.

Victoria and NSW are dealing with major ambulance delays as COVID cases and hospitalisations increase, along with new infections. Many supermarket shelves are empty as thousands of employees are isolating at home with the infection.

Businesses and organisations in every sector have either closed, or are working at a limited capacity, due to the infection of their staff.

Another major concern for parents, children and teachers, who have suffered two years of home schooling, is whether vaccine supply issues, will delay the return to school in other states as well, following the example of Queensland.

With school due to begin in a couple of weeks, GPs are warning there are not enough doses to meet demand ahead of 5–11s getting vaccinated.

The sheer volume of Omicron cases is putting dangerous pressure on the healthcare system, and according to The ABC the Victorian government is preparing to use vacant hotels to house patients, in an effort to ease some of the pressure on hospital wards.

Recovering on your own, without treatment, is a positive story. As the virus spreads, and more and more people are infected, those requiring hospital care are increasing daily. Apart from the strain on an already over-stretched hospital system, the death-toll is also, tragically, rising.

In NSW, 29 people died overnight, passing the previous record of 22 deaths on Thursday, and Victoria recorded another 18 deaths on Friday, and in Queensland 3 people died.

There are 2,525 people in hospital with the virus in NSW, and of those 184 are in intensive care units.

In Victoria, out of the 976 hospitalised patients, 112 are in intensive care, 30 of who are on ventilators. The vast majority of those receiving critical treatment are unvaccinated.

In Victoria another 34,846 new cases were recorded on Friday, and in NSW 63,018, but these numbers are considered an underestimate, due to the shortage of rapid tests, and also their inaccuracy.

In an attempt to slow the “Omicron” crisis and protect people from severe illness, authorities are urging everyone eligible to get their booster shots as it can significantly reduce the chances of catching Omicron.

Former Health Minister of Victoria, Jenny Mikakos, urges the elderly to get their booster shot, as soon as possible, as two doses of AstraZeneca is said to offer little protection against the Omicron variant.

“Only 15% of Victorians have received their 3rd vaccination dose,” Ms Mikakos told Neos Kosmos, stressing how urgent it is for the elderly, especially, to get their third vaccination shot.

Melbourne University epidemiologist Tony Blakely said that, although researchers were yet to obtain “precise” data, early signs showed boosting provided up to 70 per cent protection against infection with the Omicron variant.