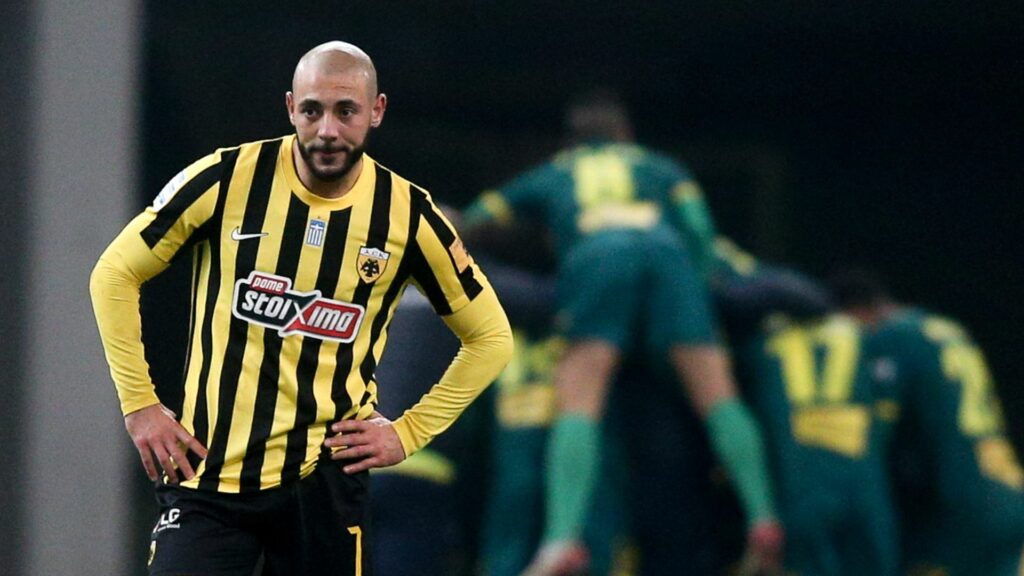 A disappointed Nordin Amrabat of AEK walks away as Panetolikos players celebrate teammate Javier Mendoza’s winner in the background. The 1-2 defeat by the Agrinio side consigned AEK to third place in the Super league. PAOK now hold second spot after beating OFI 0-3. Photo: Sotiris Dimitropoulos/Eurokinissi

With the giants of Greek football hugely unable to produce quality play, it was the regional team of Panetolikos that stole the limelight of the Greek Super League’s 18th round by beating AEK in Athens.

Olympiacos set up a strong defensive base to earn an away 0-0 draw against Panathinaikos on Monday morning (AEDT), protecting their now 18-match unbeaten league run, though they will be dismayed that they have failed twice this season to defeat their arch-enemy.

Panetolikos completed a remarkable 1-2 away comeback win over AEK. The Athenians took the lead in the 44th minute after a tidy run and finish by striker Karim Ansarifard. The Agrinio side made a late surge, first equalising through striker Nikos Karelis (78’) before midfielder Javier Mendoza released a wonderful shot from range to seal the result (84’).

Giannina was held to a 1-1 draw by Atromitos in an odd game with a lightning start. All of the match’s action came in the first three minutes, with goals to Atromitos striker Efthymis Koulouris (1’) and Giannina forward Juan Jose Perea (3’) lighting up the game before both teams composed themselves.

PAOK leaped ahead of AEK into second after defeating OFI 3-0 on Sunday morning (AEDT), extended their winning streak to seven in all competitions. Midfielder Jasmin Kurtic bagged a brace (55’ pen., 76’) before striker Karol Swiderski finished off with their third (84’). OFI were unfortunate not to take the lead after VAR awarded a penalty to PAOK, disallowing the goal they scored immediately following the penalty shout as a result.

Apollon Smyrnis kept Aris to a 0-0 result at home with some crucial defending and goalkeeping earning themselves a point against the Thessaloniki side.

Lamia finally ended their seven-match winless league run with a 2-1 home victory over Ionikos. The Fthiotida side scored first through forward Lazar Romanic in the 11th minute before winger Lass Bangoura doubled their lead (86’), scoring in his first appearance for the club. Ionikos substitute Vasilis Mantzis got one back (90’) in what proved to be a consolation goal.

Asteras Tripolis secured a 1-0 home result over Volos, jumping past Aris into seventh. Midfielder Kevin Soni controlled the ball and struck it on the turn into the back of the net (41’), earning his club their third win in their past four games.