In a big win for Melbourne’s Greek community, this week saw Victoria’s Heritage Council grant heritage protection to Melbourne’s iconic Amphitheatre complex at Fairfield on the banks of the Yarra. The decision comes after an immense community campaign led by Melbourne’s Stork Theatre, which founded the theatre with the then Northcote City Council.

Heritage Council Victoria issued its decision on 18 January, determining “that the Fairfield Park Amphitheatre Complex is of State-level cultural heritage significance and is to be included in the Victorian Heritage Register”. Significantly, the decision covers the whole complex – the Amphitheatre, Kiosk and Pavilion – a key aspect of the Stork Theatre’s campaign and was made against the recommendation of Heritage Victoria, part of the Victorian Department of Environment, Land, Water and Planning, as well as a previous VCAT decision.

This is great news not only for the Stork Theatre but also to all interested in the theatre’s role as a supporter of Hellenic culture and the wider arts community. In granting protection, the Heritage Council cited the theatre’s importance as a reflection of Victoria’s migration story, specifically the role of the local Greek community in supporting its creation. 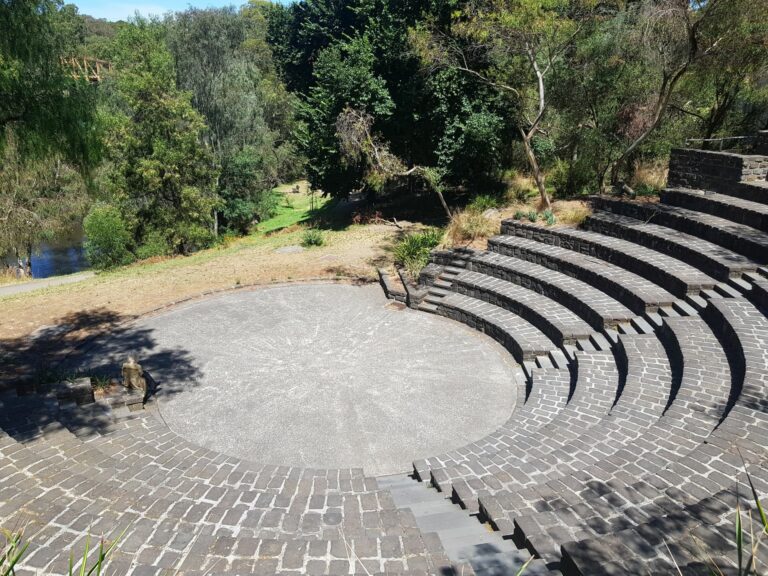 With the then Northcote City Council overseeing its development, the Amphitheatre was conceived on the model of Greece’s world famous Epidavros Amphitheatre, reimagining recycled bluestone from the streets of Northcote. The whole project was support by the then Federal Labor Government and its local MP the Hon Brian Howe. Since its creation the Amphitheatre has been the site of original Epidavros Festival, many Stork Theatre productions and witnessed many productions of Hellenic artistic works – from theatrical productions to the recent readings from Homer’s Iliad.

The Heritage Council Victoria decision specifically recognizes the Amphitheatres significance as “an expression of the consolidation of Greek migrant identity in Australia”, as an expression of Australia’s multiculturalism and in “its bi-cultural importance to Greek-Australians in Victoria’s cultural development” through its “symbolism, design, programming, community engagement and cultural influences”. The Amphitheatre Complex demonstrates the underpinning of migrant acceptance by the broader Australian community, and a self confidence in established migrant communities in the expression of their own identity and cultural heritage in Victoria.

The public campaign has been widely supported by members of Melbourne’s Greek community – from politicians, through community organizations to the thousands of individuals who joined in the campaign petition. This has included local MP Kat Theophanous and colleague Lee Tarlamis MP, local school students, NUGAS representatives and the Greek Orthodox Community of Melbourne and Victoria amongst many others. Neos Kosmos has also been a supporter of this important campaign from its inception.

In welcoming the decision, Local MP Kat Theophanous said that she was overjoyed at the decision. “I have been working in support of the campaign for many months. Not only is the Amphitheatre an important and iconic arts facility, but it represents an important aspect of Melbourne’s multicultural history, a cultural asset that has been supported since its inception by the local Greek community.” Ms Theophanous hoped to that the local council would now work to support the growth and long term future of the Amphitheatre. In welcoming the decision, she was joined by Lee Tarlamis MP who has also taken part in the campaign in support of the Amphitheatre and congratulated Helen Madden and the Stork Theatre campaign team for their efforts.

Greek Community President Bill Papastergiadis welcomed the decision on behalf of the wider Greek community and committed to working with the Stork Theatre to enhance the use of the theatre.

“The Greek community has a long tradition of supporting community arts projects, including those who came together to support the development and use of this theatre. I look forward to working with others in the community to continue this commitment into the future. I strongly believe that we need to seize the opportunity presented by the Amphitheatre’s heritage protection to expand its use as a centre for the appreciation of the Hellenic culture to our common heritage”, he said.

Bill Papastergiadis said that he had been proud to support the campaign and would be holding urgent discussions with Stork Theatre and relevant Greek community organizations to advance this commitment in coming weeks. He was also keen to engage with the State and Federal Government’s as to how they might support the future of the complex. “I look forward to full program of cultural events being held at the Amphitheatre, encompassing the Stork Theatre’s events, its incorporation into our annual Antipodes Festival, Greek community cultural events and local schools and tertiary institutions. I can see the Amphitheatre as a hub for theatre, readings and celebrations – all recognizing the vitality of our Hellenic culture in Australia”, Bill said.

In welcoming the decision, the Stork Theatre’s Helen Madden looked forward to a new and bright future for the Amphitheatre. Helen said that with the decision she felt that something truly magical has happened on the banks of the Yarra – Greek culture has been recognised by the Heritage Council Victoria in its manifestation in the Fairfield Amphitheatre Complex.

“The decision is a great relief to all who know and love the Amphitheatre. “As we said in our submission to Heritage Council Victoria, the Ampitheatre is the only professionally equipped amphitheatre and outdoor performing arts venue in Victoria with unique acoustic qualities. The challenge now is to secure its future as a vibrant community facility and importantly as a permanent home for a theatre company.  I look forward to working with the Greek community and its representatives to realize this vision”, she said.

Copies of the Heritage Council Decision can be found on the Neos Kosmos website.

Jim Claven is a trained historian, freelance writer and published author. He reviewed the Stork Theatre’s recent production of Homer and been an active supporter of the Fairfield Amphitheatre campaign.