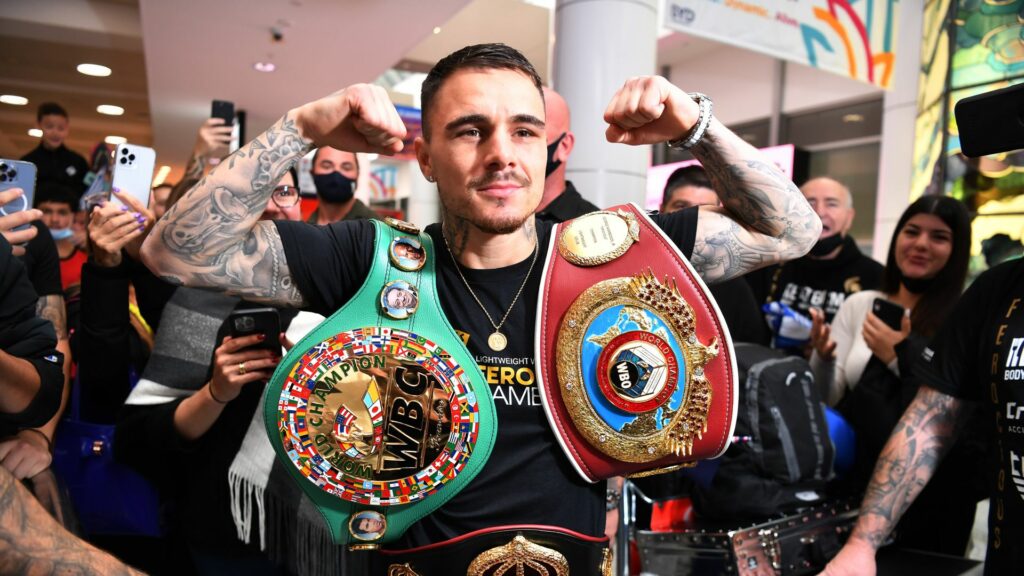 George Kambosos is met by family and supporters after arriving at Sydney Airport with three world title belts won in one fight in the United States, against Teofimo Lopez. Photo: AAP/Dean Lewins

Lomachenko has been Kambosos’ top option and is determined for a comeback after his shock defeat to Teofimo Lopez.

Lopez lost three belts to Kambosos during the world championship face off two months ago.

Now Lomachekno says he will stop at nothing to get his belts back by any means necessary.

“Lomachenko wants to fight Kambosos and we want to do that fight in Australia and we can raise a lot of money to do that fight, but we can’t do it in the face of Covid,” Lomachekno’s manager told the media.

“The government won’t give us money with Covid rampaging now through Australia. I really believe – I’m optimistic — that this is the last of the Covid with omicron surging all over but not doing much damage.

“It’s like a fighter in the late rounds throwing a lot of punches but he’s so tired the punches have no effect on the opponent. I’d like to do the fight in Sydney. We’ve explored ways that it could be done. I’m very optimistic,” he said.

Greek Australian ace Kambosos Jr, however, is excited about fighting Lomachenko in front of his home crowd even though he has a ‘thing. for beating his opponents in their own back yard.

“Look, my whole career has been the hard road. There’s never been an easy option for me, I’ve always had to grind,” Kambosos said.

“I wouldn’t be real, I wouldn’t be true to myself if I sucked the crowd and said, ‘Hey, I’m coming back for a defence but an easy fight, you’re going to see three rounds’. What for? I’m coming for the big names, and we’re already in negotiations with everybody.”

Showing how ready his is to take on anyone under any circumstances Kambosos added: “I love the Haney fight, I love the WBC piece. I love the Lomachenko fight, a big name worldwide, and Tank Davis as well. Ryan Garcia, he’s got a huge name, I want to see him back in the ring first. But we are sitting here negotiating, making sure that they are going to come to Australia first. That is the most important, that they will travel down under.”

“I know for a fact Haney will and Lomachenko will so that is a big plus straight away.”