Dylan Alcott, Paralympian and advocate become the first person with disability named Australian Of the Year 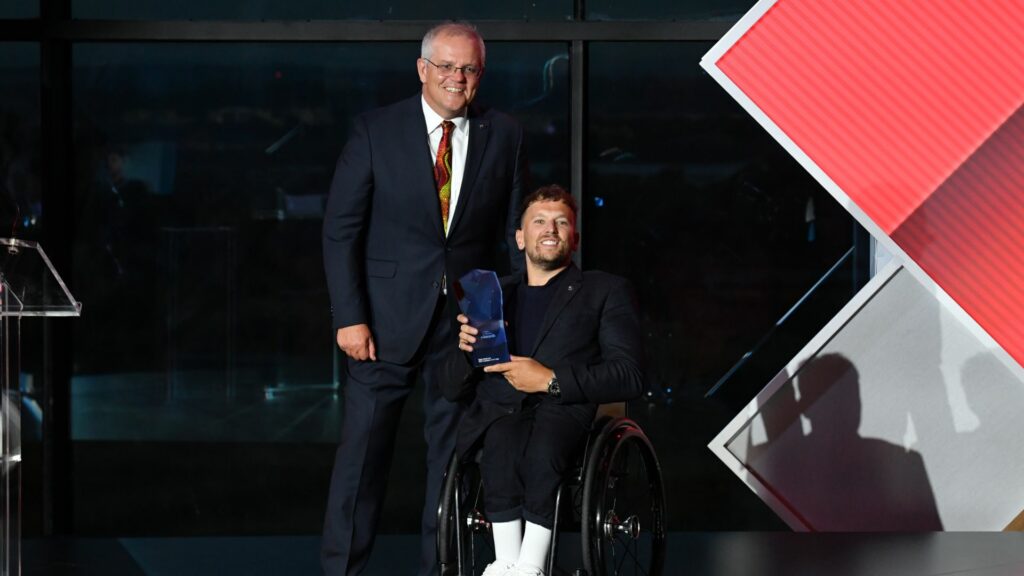 In the 62 years history of the Australia Day Honours list, 2022 becomes the first year a person with disability received the Australian of the Year award.

Paralympian and disability advocate Dylan Alcott, 31, has been named Australian of the Year. Alcott is also philanthropist, media commentator and advocate.

It is not the first time the 31-year-old has received accolades for his athleticism and disability work; in 2009 he was given an Order of Australia medal for services to sport at age 18. In 2014 he set the world record for the longest continuous playing of wheelchair tennis – 24 hours non-stop – to raise funds for The Starlight Foundation and the Children’s Charity. Having started his career as an athlete from wheelchair basketball he fell in love with tennis and now has 23 quad wheelchair grand slams under his belt including a Newcombe Medal, being the first male in history to win a Golden Slam in any form of tennis.

Alcott was also was named GQ Sportsman of the Year for 2016, the same year he was awarded the title of Paralympian of the Year. Moreover, in 2017 he founded the Dylan Alcott Foundation to provide scholarships and grant funding to marginalised Australians with a disability.Unstopable as he is he co-founded disability and accessibility training start-up Get Skilled Access and organised AbilityFest, Australia’s first and only inclusive, fully accessible music festival

“To the individuals being celebrated today; thank you for your contribution to Australia and congratulations on being recognised by your peers and your nation,” the Governor-General said in a media statement.

Among the Order of Australia (General Division) awards was Mr George Stamas AM, from Carlton, Victoria.

Mr Stamas is well known in the not-for-profit and business sector. Having build his empire from scratch he now employs over 3,000 people in Australia and New Zealand. He has also played a pivotal role in the establishment of GJK Indigenous Solutions. Since 2018 he has been Director at the Epworth Medical Foundation, a supporter and donor to various charities such as The Hunger Project Australia and Kids Cancer Project.

Dr Peter Gianoutsos OAM, from New South Wales, a founding member of the Australian Lung Foundation and a Clinical Associate Professor at the University of Sydney has also been named in the Order of Australia.

Born in New Zealand in 1939 to a Greek immigrant father, he has been recognised for his service to medicine as a respiratory physician. Mr Gianoutsos has been an Emeritus Consultant Physician at Royal Prince Alfred Hospital since 2014 having held a number of prestigious management positions in the hospital.

Dr Gianoutsos has also played a great role in the work of the  Australian Respiratory Council (as Vice President, Board Member and Life Governor); the Thoracic Society of Australia and New Zealand (as Emeritus Member, Honorary Treasurer and Member); and the Royal Australasian College of Physicians (as Chairman, Fellow and Life Member).

Acknowledged for her service to the to the Greek community of South Australia was Mrs Mary Mangos OAM, who for 70 years has both initiated and been involved in major fundraisers for charitable events that benefit both the Greek and the wider community of SA.

The Kastellorizian, has been on the Board of the Greek Women’s Society of SA – which was founded by her mother since 1943. Mrs Mangos has also worked with the Greek Orthodox Community,  the Lions Hellenic and the Kastellorizo Association of South Australia.

Meanwhile, Western Australia’s Anthony Michael Kannis PSM – also a Kastellorizian -has received a Public Service Medal having been named in the COVID-19 Honour Roll in the Australia Day Honours List. As part of the Meritorious Awards, he was recognised for outstanding public service to transport and infrastructure reform, particularly through METRONET and especially while the state dealt with COVID-19.

Mr Kannis, who is is currently serving as the Managing Director of METRONET, Perth’s largest investment in public transport, has been the Deputy Chairperson of the WA Treasury Corporation, the WA Planning Commission’s Infrastructure Coordinating Committee, and the Western Australian Government nominee on the Infrastructure Australia Board.

Having heavily contributed to the Frontline 2020 reform program, Mr Kannis has also championed gender and equity reform in his portfolio, greatly increasing the number of women in senior positions.

Mr Petrikas who has been a firefighter since 1976, at only 14 years of age, has served his Brigade and district as Senior Deputy Captain, Captain, Deputy Group Captain, Brigade Training Officer, and he currently holds the rank of Group Captain. During his tenure he provided outstanding leadership and encouragement to his brigade members and throughout the district. Over his many years of service, he has attended numerous fires within district and on various deployments.

A dedicated trainer and assessor, has mentored many frontline firefighters in the NSW RFS among other agencies, and has volunteered his time and efforts to emergency services organisations in the state across all levels of management.

In the Military category – a Distinguished and Conspicuous Service Medal was awarded to Petty Officer Thai-Britney Jade Demos CSM at the Royal Australian Navy.

She has been commended on her leadership and management skills and mentoring capabilities, always going above and beyond.