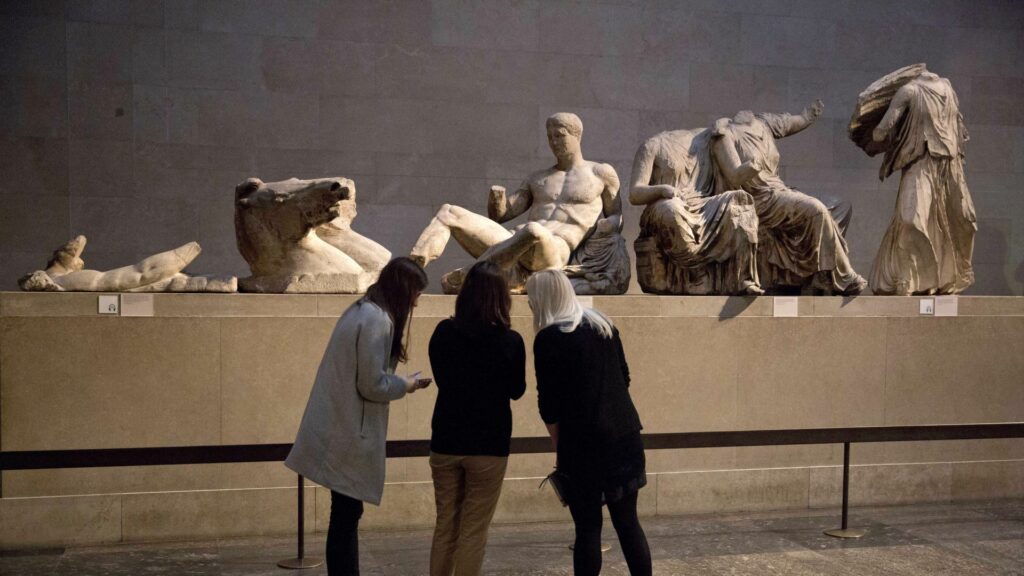 Three women in the Duveen Gallery of the British Museum discuss a marble statue of a naked youth thought to represent Greek god Dionysos, centre, taken from the east pediment of the Parthenon. The museum this week denied permission for the Oxford-based Institute of Digital Archaeology to carry out high-quality 3D imaging of the Parthenon Marbles. Photo: AAP via AP Photo/Matt Dunham

The British Museum will face a court challenge after it denied permission for an Oxford-based archaeological institute to digitally scan the Parthenon Marbles to create high-quality replicas of the works that have been housed at the museum since 1816.

The executive director and founder of the Institute of Digital Archaeology (IDA), Roger Michel, told Greek newspaper Ta Nea, that the institute would take legal action to appeal against the museum’s decision not to allow the IDA access to the collection housed in the museum’s Duveen Gallery.

“I’m really surprised at how short-sighted people can be. This arbitrary refusal reveals the intransigence of the British Museum, its arrogance and snobbishness,” Mr Michel said.

The IDA, which is a partnership between the Oxford and Harvard universities, submitted its request to photograph the Parthenon Marbles using three-dimensional imaging cameras on 8 February and received a negative response from the British Museum on Monday.

It stated in its response that: “Digital scanning plays an important role in research and can lead to new discoveries related to various objects such as the Parthenon Sculptures,” it added that, “we are not in a position to approve your request. However, the reasons for the decision shall not be disclosed, nor shall any justification for declining the request be provided.”

Mr Michel who is a scientific fellow of Trinity College said: “It took almost a month and a half to reply to our request. Every week they would email me and assure me that the request we made is very common and it will be effortless for them to respond positively. In the end, they rejected it, without giving us any explanation.”

“This is an arbitrary and irrational decision. The Museum’s refusal conceals a prejudice towards us. I do not think it is legally correct. The Museum, as a state-funded institution, must provide unhindered access to its premises.”

He said the Institute would appeal against the decision in court next month.

“The Museum is obliged to treat all requests in the same way. As a public body, it is not entitled to act unjustifiably and arbitrarily. It does though. That’s why I believe that eventually we will be given (by the court) the right to scan the Sculptures”.

According to the IDA website, Mr Michel said the initiative to scan the works was “aimed at resolving the longstanding dispute over the Parthenon marbles: the creation of high-quality copies of the Marbles to replace those currently held by the British Museum, allowing the originals to be returned to Greece.”

The IDA says on its website that the proposal “calls for immediate construction of a “proof-of-concept” copy, carved in the original stone and accurate to sub-millimetre scale, of one of the Marbles in the British Museum’s collection. Copies like this will allow the British Museum to fulfil – indeed, significantly expand – its educational mission, while promoting ethical stewardship of important heritage objects.”

It was a proposal that was praised in a 14 February editorial by influential English newspaper The Times which said the 3D printing “could allow the marbles to return to Athens”.