Race and Ethnicity meant little to the Ancient Greeks

Archaeologist Thanos Matanis reminds us that that in a world that seems to be fixated on identity, ancient Greeks, in comparison, were comfortable with ethnic ambiguity. 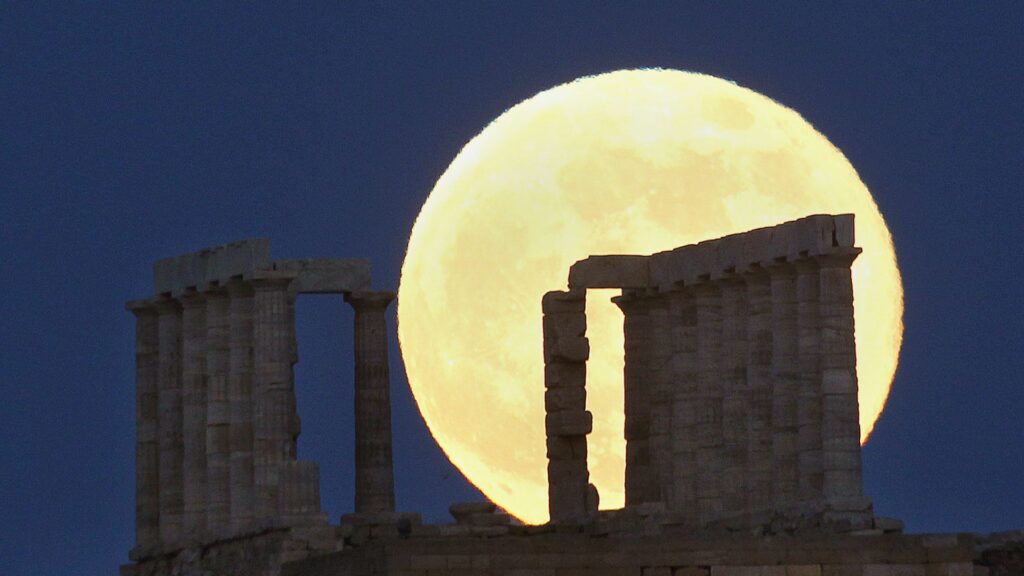 A supermoon rises over the temple of Poseidon, the ancient Greek god of the seas, in Cape Sounion. Photo: AAP/REUTERS/Yannis Behrakis

The Many Shades of Greek-ness
Homer’s Iliad is one of our earliest Greek sources (c. 8th century BCE) and is considered a narrative that united the Greek world. And yet, Homer didn’t label the force that left the Aegean shores with a single name (Hellenes), but instead spoke of Achaeans, Danaans, and Argives (Greek tribes).

The reason is there was no one archetype of Hellenicity in antiquity. Many varieties of Hellenicity existed, united by common myths, which differed depending on which area of Greece you were from; common literary forms, such as poems, dramatic theatre, histories, and Panhellenic festivals at sanctuaries.

“So, we’re both Greeks, right?”, “Sure”
Herodotus cites the first mention of anything close to resembling our modern definitions of ‘ethnicity.’ In an exchange between two paranoid allies at the onset of the Persian war, Herodotus writes the Athenians responded to Sparta’s suspicions of betrayal, by affirming mutual ties of ‘to Hellenikon’ (the Greek identity).

According to our source, this was based on common blood, customs, language, and religious practices. There was, however, no legal document or manifesto codifying Hellenicity. A close examination of the context suggests that the Athenians attempted to reassure the Spartans of their allegiance.

However, such Spartan doubts may emphasize just how concerned Greek states were of one another’s commitment to any sense of collective identity. Ironically, not long after the Persian Wars, Sparta allied with Persia against Athens during the Peloponnesian War (431-404 BC).

Producing the ‘Barbarian’
Since ‘Hellene’ was not neatly defined, neither was ‘Barbaros’ (non-Greek). The term ‘Barbaros’ is likewise nowhere to be found in the Iliad, apart from a passing comment that the Carians were barbarophonon (spoke a foreign tongue).

Contrarily, the Homeric tradition conceptualised a familiar Trojan with a range of Greek attributes. In the 5th century, playwrights like Euripides, broke away from the tradition and portrayed the Trojans with barbaric qualities. So why the sudden breakaway?

The theatre of 5th century Greece was conceived in the context of the Persian wars. In a period of rivalry with an external empire, the Greeks took an analogous conflict in their history (the Trojan war) and associated it with a contemporaneous threat (Persia).

In this political upheaval, then, ‘Barbaros’ was manufactured. But even so, the term did not connotate the allusion of savagery and sub-humanity the way it does today. Instead, the term stood as a label for the political enemy of Greece or a particular Greek people.

Despite this invention, Euripides was not seeking to besmirch non-Greeks. As Dué (2006) argues, the invention of Trojan ‘barbarity’ could even be seen as a narrative ploy to emphasize the commonality of suffering.

The ‘Barbarian’ Greeks
Adding to the complexity, ‘Barbaros’ was not exclusively used to describe non-Greeks either. Greeks often labeled other Greeks who posed a threat as ‘barbarians’.

Athenian politicians used the term prolifically to smear their rivals who were otherwise of accepted Greek origin. Despite support given by figures such as Herodotus and Isocrates for the Greek roots of the Macedonian dynasty, Demosthenes asks, “is he (Phillip II) not our enemy? Are not our possessions in his hands? Is he not a barbarian?”

Further illustrating the ambiguity of the Greek/Barbarian paradigm, Greeks had no qualm with accepting that their customs were of Barbarian origin.

Herodotus, Socrates, Plato, Aristotle, and Isocrates believed that Athenian laws, arts, and writing were sourced from Egypt. Not to mention the plethora of Greek cities and peoples thought to be unabashedly founded by non-Greeks like Cadmus, Danaus, and Pelops.

As Gruen (2020) concludes, “…ancient societies generally shunned the sense of ethnicity as an undeviating marker of distinctiveness stemming from descent, and that they were, therefore, open to change, adaptation, intermingling, and incorporation.”

Thanos Matanis is a writer and archaeologist with a deep passion for the past. When he is not on digs, he contributes to publications, like Ancient-Origins and now, Neos Kosmos.