Epic glory and modern war: from the walls of Troy to the defence of Kyiv

Professor Joel Christensen looks at the fraught notion of glory and fame and draws comparisons between Homer’s Iliad and the war in Ukraine – and reveals that there’s no glory or fame in bloodletting. 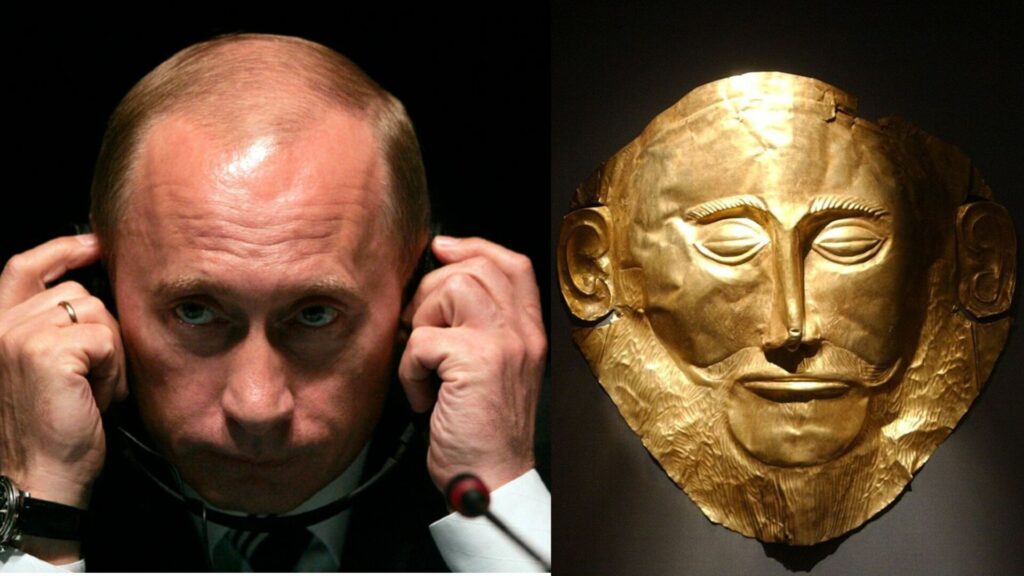 Russia's President Vladimir Putin listens during a presentation of his delegation to the International Olympic Committee back in 'peaceful' 2007. Photo. AAP via REUTERS/Carlos Barria. (R) The renowned gold death-mask of Agamemnon, kept at Athens' National Archaeological Museum. Photo: AAP via AP/Thanassis Stavrakis

Simone Weil wrote her much-celebrated essay, “The Iliad or the Poem of Force” during the occupation of France by Nazi Germany. Her provocative assertion in the essay’s opening paragraphs that “the true hero, the true subject, the center of the Iliad is force” still makes readers rethink what we assume about Greek epic.

Weil’s “force” is just as easily Homeric bie–violence–the very thing that sends countless Trojans and Greeks to their doom. A Greek “hero” is not a perfect specimen of human virtue, but is instead a superhuman symbol endowed with the capacity to suffer and cause suffering.

Homeric language exerts a gravity on our thoughts and reporting when war and suffering are in the news. The stories we tell about war, however, use epic words without quite getting their spirit. Ancient Greek epic and myth were not just stories to be told–they were reflections of human lives and vehicles for thinking through the terrible things that happen and the shared experiences that kind bind us together.

As the Russian tanks drove deeper into Ukraine two months ago, the unexpected defence and rallying of the Ukrainian people drew the attention of audiences around the world, many rooting against the invasion even as some parroted Russian propaganda. President Volodymyr Zelenskyy emerged as a valiant voice of resistance, evading capture and assassination and rallying his people to the defence of their homeland. Social media accounts everywhere adopted the blue and yellow of the Ukrainian flag and the phrase Sláva Ukrayíni! (“Glory to Ukraine”), forbidden under the Soviet Union, became commonplace.

Greek kleos, “glory, fame” is related to the verb kluo, “to hear”. It is cognate with Proto-Slavic *slava, the root for Ukrainian “glory” (Sláva ). It marks a story that is told and retold over time. In those first few weeks of the invasion, the Ukrainians, in a sense, became our heroes, stoutly standing up to a familiar ‘enemy’ all while standing in for nations who will not risk direct conflict with Putin’s Russia. Our cheering for Ukrainian defence and their glory recalls the everlasting fame–kleos–of Homeric heroes just as our inability to act or respond to reports of Russian war crimes and genocide echoes our reluctance to see the horrible crimes of Homeric heroes.

What is glory beyond the telling of a tale and who gets to claim it? Most readers of Homer’s Iliad remember Achilles’ report of his two choices–to live a long life unknown, or to die young and live on in immortal fame. But the epic’s tale is more complicated. Agamemnon complains more than once that he will return home with a bad reputation (negative kleos) if he fails to take Troy and Hektor repeatedly imagines his future fame preserving his name, even if his city should fall.

What school summaries and casual readings of the Iliad often miss is that every Homeric hero is already going to have glory or fame. The poem’s question is how they get it. In the epic’s first and ninth books, Achilles rejects the very notion that his great deeds of violence are equally compensated by the spoils of war. He actually refuses to return to the battle until his own ships are lit aflame and when he does return notes that people will remember his conflict with Agamemnon for a long time. In English, fame is not necessarily glory: in Homeric terms, it might as easily be a cause of honor as shame.

If Weil is correct and violence is the epic’s central concern, one of the first questions the narrative asks of it is why. Why fight? Why risk your life at all? Achilles dismisses any notion that there’s fair compensation for this risk, but Hektor never questions it at all.

At the core of the epic’s interest in the rage of its protagonist, then, is his relationship with violence. He steps away from it when he no longer believes that he is sufficiently honored in the epic’s first book. He returns only after the death of his friend, shedding blood on the battlefield because he was too late to defend the person, he cared for most.

If Homeric epic has a summary judgment on violence, it is that it destroys communities but is required at times to defend them against external threats. In the tragedy of Hektor, a man strong enough to keep the enemies at bay but whose death seals his city’s fate, we find the strongest claims to glory and fame. Hektor repeatedly takes comfort in the fact that his story will be told while Achilles has no significant interest in fame after Patroklos’ death.

This contrast helps us to better understand the coverage and response to the invasion of Ukraine. President Zelenskyy stands as a Homeric hero of Hektor’s stature, rallying his people against seemingly insurmountable odds and standing for a rare cross-cultural universal: the honor and glory of defending your family and people against external aggression. The Russian invasion has played the horrifying corollary, from mundane accounts of looting and dragging dishwashers across the Belorussian border to the gut-wrenching accounts of heartless murder, rape, concentration camps, and inhuman devastation. As a despot, Putin fits the part of a power-obsessive, out of touch Agamemnon. Only occasionally do we hear of the humans who carry out his vicious campaigns: the captured soldiers allowed to call their parents by Ukrainian captors; protestors within Russia, rapidly captured and silenced.

Moving Hearts, but not minds

No reading of Homer’s Iliad alongside modern warfare can render violence glorious. Bloodshed is bloodshed, whether by an aggressor’s or a defender’s hands. The language of glory in war nevertheless moves us. Ukraine has stood against its historical oppressor beyond what any had imagined. But what does our rooting interest in this war say about us?

One of the most startling things about Weil’s essay is its steady shift from asserting that force or violence is the central figure of the Iliad to implying that this symbolic hero is really the antagonist against which the poem’s characters and audiences should struggle. The closing pages of the essay emphasize that part of what is remarkable about Homer’s Iliad is the humanity it affords to the Trojans and the Greeks alike in presenting their pain and suffering as worthy of song and, ultimately, worthy of lament and regret.

As a member of GenX, I recall the late 90s now as an inter-imperial period, even if it was truly just a lull in obvious imperial activity on the part of my own country. In the two decades since, we have been engaged in almost constant conflict, occupying Iraq and Afghanistan for years, watching the attenuation of older alliances and occasionally rattling sabers against imperial opponents real and imagined. Not a few media critics have noted how Western sympathies with Ukrainians reflect our racist and colonialist histories: Ukraine is not the first country invaded on slight pretext by a foreign power in the 21st century.

War almost always demands dehumanization; yet media coverage of modern warfare has made it easier than ever to view our bloody conflicts as television serials. Each episode of force, however, has trumped up violence with uncritical heroism: our soldiers are righteous no matter whose land they stand on. Yet if our wars had a Homer to tell their tales, Hektor might very well be a member of the Taliban and his people would be depicted as bravely defending their homes against foreign invaders. This assertion subtracts nothing from the bravery of the Ukrainian people; nor does it defend in the slightest the sheer evil of the invader’s violence. Instead, it is a reminder that we bestow glory unevenly, based on allegiances we cannot always voice.

How would our stories of international violence be different if we took the Iliad’s central lessons to heart? Simone Weil ends her essay on the Iliad with remorse, noting that almost no literature after the Homeric epic has elevated the same awareness of our shared humanity. She notes instead that later generations have used ancient literature “for an appropriate quotation every time anybody had a crime he wanted to justify” and that later Christian fanaticism “threw a veil over the effects of force on the souls of those who used it”.

Her hope in looking to a future was in a time when people “…will learn that there is no refuge from fate, learn not to admire force, not to hate the enemy, nor to scorn the unfortunate. How soon this will happen is another question.”

Three generations after the end of World War II and that time, is nowhere in plain view.

* Joel Christensen is Professor and Senior Associate Dean for Faculty Affairs at Brandeis University. He has been a Fellow at the Center for Hellenic Studies (2013) and has received the Society for Classical Studies’ Award for Excellence in Teaching at the Collegiate Level (2013). He has published extensively and some of his work include “Homer’s Thebes” (2019) and “A Commentary on the Homeric Battle of Frogs and Mice” (2018). In 2020, he published “The Many-Minded Man: the Odyssey, Psychology, and the Therapy of Epic” with Cornell University Press.