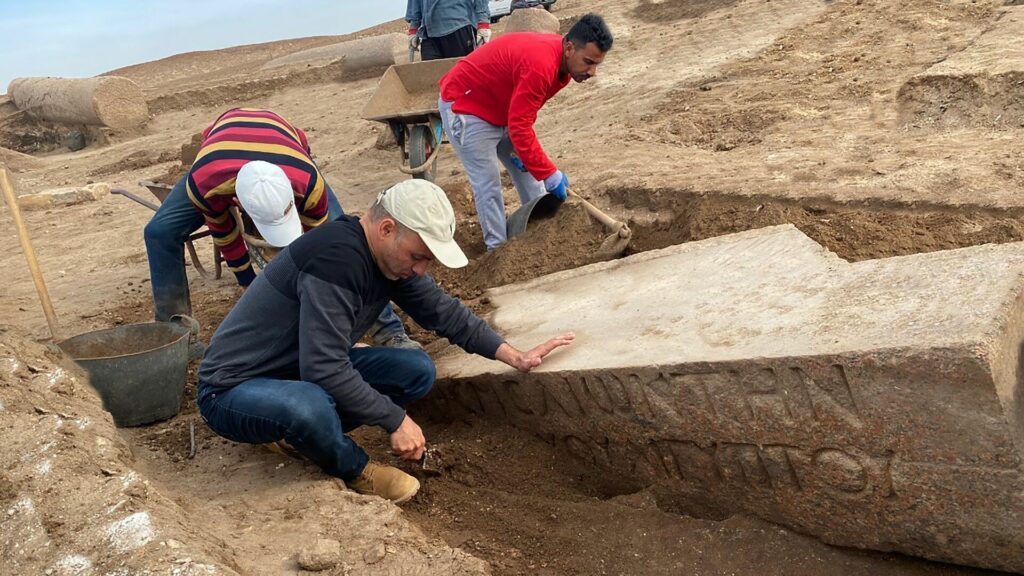 This undated photo provided by the Egyptian Tourism and Antiquities Ministry on April 25 shows archeologists working in the ruins of a temple for Zeus-Kasios, at the Tell el-Farma archaeological site in the northwestern corner of the Sinai Peninsula. Tell el-Farma, also known by its ancient name Pelusium, dates back to the late Pharaonic period and was also used during Greco-Roman and Byzantine times. Photo: AAP/Egyptian Tourism and Antiquities Ministry via AP

Egypt’s Tourism and Antiquities Ministry this week announced the archaeological discovery of a Zeus-inspired temple at Tell el-Farma archaeological site in the northwestern part of the Sinai Peninsula.

The uncovered temple was dedicated to Zeus-Kasios – a fusion of the ancient Greek god Zeus and Mount Kasios, the mountain on the border of Turkey and Syria where Zeus defeated the monster Typhon with his thunderbolts and gained control of the cosmos.

The Mount Kasios region, which is known today as Jebel Aqra, experiences regular thunderstorms and was a major worship site for a number of ancient religions.

The secretary-general of Egypt’s Antiquities Council, Mostafa Waziri, said the site was identified as the Zeus-Kasios temple following the discovery of two collapsed 1.98m pink granite pillars that may have stood at the temple’s entrance. He said an earthquake could have caused the collapse of the pillars.

He said archaelogists also uncovered granite blocks that could have been part of a staircase which gave worshippers access to the temple.

Early in the 20th Century, the site was partially excavated by French Egyptologist Jean Clédat who uncovered a stone with Greek carvings. At the time, the Frenchman was in Egypt looking for Christian monuments.

His modern counterparts rediscovered Clédat’s stone and uncovered another stone with Greek inscriptions. They also found that the temple’s pink granite blocks were used on other structures.

The director-general of the excavation, Hisham Hussein said that he was studying the blocks and would carry out a photogrammetry survey (a process to measure and interpret photographic images and patterns of electromagnetic radiant imagery and other phenomena) that would help to determine the temple’s architectural design.

The archaeologists also found inscriptions that showed that the building was renovated Roman emperor Hadrian (117-138 AD).

A Smithsonian magazine article last year reported that the entrance gate to another temple dedicated to Zeus was found in the ancient Greek city of Magnesia in modern-day Turkey.