Panathinaikos defeats Aris to take the lead in race for third 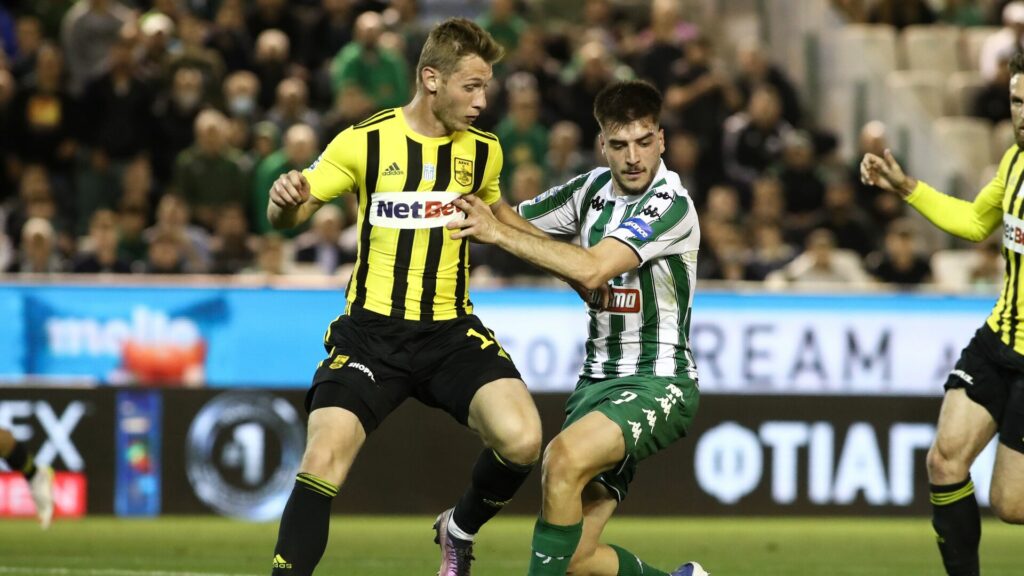 SUPERLEAGUE 2021-2022 play off between Panathinaikos and Aris. Photo: Thanasis Dimopoulos/Eurokinissi

Panathinaikos has taken charge of the fight for third as we enter the second half of the play-offs, recording a crucial victory over Aris to jump one point ahead of them just as their other rivals for third place, AEK, dropped points in their derby with PAOK.

The “Trifylli” secured a tense 1-0 home success against Aris in the sixth round of the Greek Super League play-offs on Monday morning (AEST), building on their good recent form which has also seen them reach the Cup final.

The Greens scored the match’s only goal after winger Aitor Cantalapiedra delivered a perfect cross from a free kick, with centre half Bart Schenkeveld’s header guiding the ball behind himself and into the bottom left corner (28′).

Aris’ game was made considerably more difficult when striker Aboubakar Kamara copped two yellows in the span of three minutes to be sent off on the verge of half time (45′) and, despite good pressure, they could not find an equaliser.

PAOK and AEK battled out a hard-fought 1-1 draw at Toumba Stadium, making the Athens club fall behind in the hunt for a top three finish. Enosi drew first blood after a powerful strike from winger Nordin Amrabat snuck into the bottom left corner (15′). AEK then threw away their hard work when a misplaced pass at the back was intercepted, leading to a strong finish from PAOK striker Antonio Colak (27′). ‘

Olympiacos rescued three points at the death to defeat Giannina 3-2 at home after the Epirotans came back from 2-0 down. Goal machine Youssef El Arabi put the Piraeus side ahead (7′) before his teammate, Garry Rodrigues, doubled their lead (43′). Giannina striker Juan Jose Perea got one back near the end of the first half (45+3′) and winger Jan-Marc Schneider soon scored to complete a remarkable comeback (80′). Olympiacos midfielder Rony Lopes released a superb late volley from inside the box 90+8′), giving his side the win.

Ionikos demolished Apollon Smyrnis 5-1 in Nikaia on Tuesday morning in the fifth round of the play-outs, resigning the Light Brigade to an all but certain straight relegation. Left back Giannis Kiakos bagged a first half brace (26′, 39′) before Nikos Ioannidis halved the deficit for the visitors (49′). Ionikos midfielder Aias Aosman restored the two-goal lead (61′) and the hosts scored twice more via an own goal from Fabry Castro (87′) and a tap-in through substitute Jerson Cabral (90+3′).

Lamia earned an impressive 0-2 away victory against Asteras Tripolis to go four points clear of Apollon Smyrnis with only two play-out matches left. The Fthiotida side managed to secure all three points, thanks to goals from striker Giorgos Manousos (45′) and defender Konstantinos Provydakis (80′).

Volos fought to earn a 1-1 draw at home against Atromitos on Sunday morning, with both teams’ star strikers getting on the scoresheet. Atromitos’ Efthymis Koulouris found the game’s first goal (42′) before Tom Van Weert equalised ten minutes later for the Magnesia club, becoming equal-first top scorer with 15.

Panetolikos secured a 0-1 away victory over OFI, thanks to a great run and finish from striker Nikos Vergos (52′).