Although ostensibly Muslim, the African Cretans had developed a vibrant culture of their own, preserving many of their own traditions and beliefs 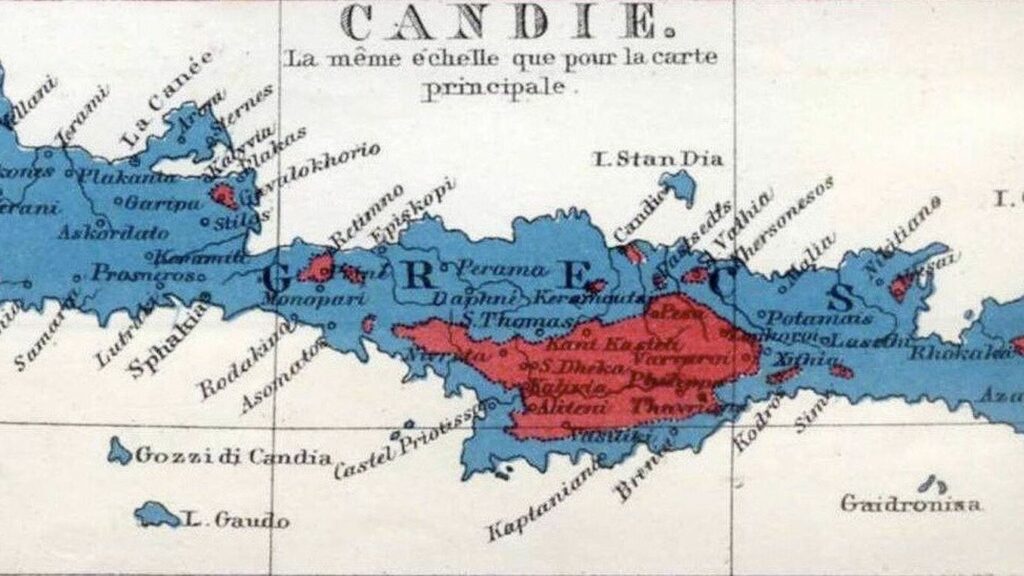 Detail of an 1861 map of the Christian and Muslim population distribution of Crete by French explorer and ethnographer Guillaume Lejean (1828-1871) from his book Ethnography of Turkey and Europe. The Africans of Crete dislocated from their homelands, converted to the religion of their enslavers. They were officially deported from the island to Turkey in the population exchanges between 1923-1926. Photo: Guillaume Lejean, Public domain, via Wikimedia Commons

According to the British consul in Chania, Crete, writing in 1858 about British efforts to stamp out the slave trade in the Eastern Mediterranean described how “the whole black population of the isle” looked up to him “as their best friend and benefactor”. According to the research of Michael Ferguson on Enslaved and Emancipated Africans in Crete, there were so many trans-Saharan Africans living in Crete at that time, that another British consul, writing in 1885, argued that African slaves freed on the high seas would be better off housed with their compatriots already living in Chania.

In this respect, Ferguson points to the account of Mary Adelaide Walker, who in her 1886 book Eastern Life and Scenery observes that: “industrious” trans-Saharan Africans had “planted their village on the sea-shore” at the foot of the city’s fort. This village was “composed of small, square, flat roofed houses”, with a mosque at its centre.

While the struggles of the Cretan people for independence loom large in Greek historiography, the same cannot be said about the sojourn of non-Europeans on the island. It is a little-known fact that right up until 1922 and beyond there was present in Crete, a significant Greek-speaking population of trans-Saharan Africans.

Their presence on the island owed much to the importance of Crete as a way station for ships plying the Ottoman slave trade between Africa, Europe and the Middle East.

Brought to the island as slaves, domestic servants, soldiers or wives, the Africans of Crete dislocated from their homelands, converted to the religion of their enslavers and associated with those oppressors by virtue of that religion by the Christians of the island, were caught between two worlds, belonging to neither. Ultimately, with the advent of nationalism, their continued presence on the island proved untenable and little remains today to testify to centuries of their habitation in Crete.

There are many accounts as to the arrival of African slaves in Crete. Ferguson in particular refers to a compendium of these including an account by F W Seiber in 1817 whereby he recorded a ship arriving in Chania with “nearly fifty Negro slaves on board, who were soon landed and sold singly to Turkish inhabitants a house servants”.

In his Report of Egypt and Candia, John Bowring estimated that in 1840, there were about 2,000 of them. They were mostly situated in Chania, where visiting in 1864, artist and poet Edward Lear observed: “the queer village of the blacks, with houses in a cluster was pretty”. British traveller T A B Spratt also recorded seeing a “perfect little African community” at Chania.

Although ostensibly Muslim, the African Cretans had developed a vibrant culture of their own, preserving many of their own traditions and beliefs. In particular there are in existence, Ottoman accounts such as those by writer Leyla Saz attesting to the existence of a Zar or Bori cult, involving possession by a spirit and ecstatic dancing in Crete.

The Africans of Crete were locally known as “Halikoutes” This word, as researcher Charidimos Papadakis maintains is still heard in some parts of Crete, mainly as a pejorative term, to describe someone of ragged or slovenly appearance, as the porters, butchers and labourers of the African community were of low social and economic background and were often reduced to poverty.

According to one account, the term is derived from the Arabic command “Hal il kuti“, meaning “put the box down”, a phrase commonly used among African porters, who generally spoke Arabic.

Coexistence between the Christians of the island and the African Cretans was not harmonious, especially during the inter-communal strife on the 1890s when the Christian Cretans sought unification with Greece. There were considered a violent and subversive element, to the extent, as Ferguson points out, that the Christians of Chania wrote to the British, in a set of demands tabled in Parliament, insisting:

“All Africans who have taken part in the late murders, plunders… are to be exiled from the island; also those who do not possess real property of 10,000 piastres, and no more emigrants from Africa are to be admitted into the island.”

It is fascinating that the Ottoman authorities in response, sought to focus on the “othering” of the Africans by their Christian counterparts, asserting their equality and inherent right to remain on the island. Thus, in a letter written to the British consul, the Ottomans asserted that the African Cretans were “born here and have become our fellow citizens… they possess an equal title with us to our civil rights and cannot be looked upon as other than real natives of the country.”

The polarisation of the population of Crete into opposing Muslim and Christian factions, with the African Cretans placed by virtue of their faith with the Muslim faction meant that in the eyes of the Christian population, they were a subversive element: an obstacle to independence, an organ of the oppressors and thus had to be removed.

Ferguson, in citing Papadakis’ research contained in his work The Africans in Crete, describes how in 1901, a Christian official took the opportunity of ordering the demolition of the African quarter of Chania while local newspapers alleged that police had found swords and other weapons while setting African Cretan homes on fire. According to Papadakis, the African Cretans demonstrated outside the local parliament against the destruction of their homes, protested to the consuls of the European powers and planned to write a letter of complaint to the Sultan.

There was no intervention by any party and as a result, African Cretans continued to be targeted by the local authorities, with children being rounded up for deportation, Ferguson believes to Crete, but most likely to Asia Minor. As a result of their ill treatment, African Cretans began slowly to leave the island, many seeking work around Smyrna, where they would encounter another Christian community and similar ethno-religious tensions.

As Muslims who had acculturated to Crete, despite their African origins, and the fact that by this stage their only language was Greek, the African Cretans were considered Turks by the Treaty of Lausanne and were thus deemed exchangeable. They were thus officially deported between 1923-1926.

Ferguson cites the memoirs of African-Cretan Mustafa Olpak, who claims that his family still existed in some state of bonded servitude to a Muslim Cretan family in 1923. On the eve of their departure from Crete, he alleges that their master sold a female member of his family to a family in Constantinople. Olpak then relates how in 1926, the family was freed and they headed to Ayvali in Asia Minor, denuded of its Christian inhabitants and resettled with Cretan Muslims.

Papadakis in his work cites the cases of three African Cretans who remained behind after the population exchange. Salis Chelidonakis who died in 1967, was a fisherman who saved the lives of five soldiers at sea during the war, fed hungry children, one of which is a migrant to Australia and remembers him and gave away his pension to the needy.

He was the last of the African Cretans. His sister, Ayesha Chelidonaki, remained on Crete until the 1950s, when she migrated to Egypt. Able Nuriye Marmaraki, who worked as a nut seller in the market, was the last female African Cretan. When she died, Salis Chelidonakis performed the customary prayers at her funeral, as there was no longer an imam on Crete. Ali Koko (named thus because of his dark skin) on the other hand, worked as a dock-hand until 1926. Not wishing to be deported, he jumped off the boat and attempted to swim to land. Captured by the authorities, he was sent to Asia Minor.

Kostis Kourelis points to other populations of Africans in Greece, including one at the “Black Caves” on the slopes of the Acropolis in Athens, whose population was again subject to exchange.

In modern Turkey, African Cretans were the recipients of discrimination because of their lack of knowledge of Turkish and the colour of their skin, and popular prejudices and superstition still remain within some quarters.

In Crete, the land they called home for centuries, they are largely forgotten by a narrative, which like its Turkish counterpart, has up until recently, called for complete homogeneity.