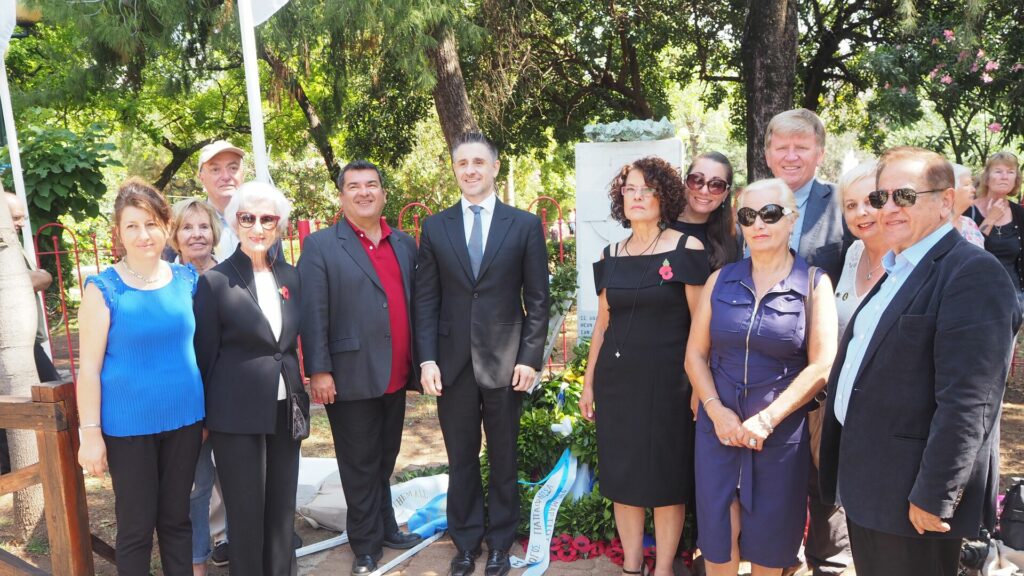 In May 2018 it was my pleasure to take part in the annual Greek Campaign commemorations held in the beautiful bayside city of Kalamata. The service is organized by the local Municipality, in cooperation with the UK-based The Brotherhood of Veterans of the Greek Campaign 1940-41. The service is held at the Greek Campaign Memorial in the city, located not far from the waterfront, the site of the Allied evacuations and the battle fought there in late April 1941.

It was in the eve of the commemorations that a group of dedicated locals – Panayiotis Andrianopoulos, Sotiris Theodoropoulos, Ilias Bitsanis and Vassilis Bakopoulos – put together a walking tour of the Greek campaign in Kalamata, focusing on the battle of Kalamata, fought on the evening of 28 April, when a combined Allied force overwhelmed a German attempt to seize the port. The tour was well attended, with many members of the UK Brotherhood and diplomatic representatives from Australia and New Zealand present, ending with the launch of a new book on the Greek Campaign.

The organizers want to create awareness of Kalamata’s role in the Greek campaign, especially the battle of Kalamata Waterfront. In May 2016 I had been assisted by them in identifying key locations across the city that were photographed by Australian soldiers, photographs that remain in the Australian archives.

Kalamata played an important role in the Greek Campaign. As one of the main Allied evacuation ports as the campaign drew to a close, the city and its harbour witnessed the arrival of thousands of tired and weary Allied soldiers, many of whom had fought and survived the fierce battles that had been fought across northern and central Greece. Allied soldiers marched through the streets of Kalamata, and the archives reveal that they were given sustenance by the local population, who offered them food and drink and thanked them for their efforts.

The battle of Kalamata Waterfront was the last significant engagement of the Greek Campaign on the mainland of Greece. As British forces fought their way into the city from the north, the battle of the Waterfront witnessed the defeat of the German force that had seized the vital harbour facilities by a combined Australian, New Zealand and British force. It was for their actions in this battle that New Zealand Sergeant Jack Hinton was awarded the Victoria Cross and Red Cliff’s Australian Captain Albert Gray the Military Cross. Yet this success would soon see the end of the evacuation efforts from the port. And despite the fact that thousands had been evacuated, thousands were left behind to face captivity or to attempt escape.

After the disruptions of the COVID pandemic, it was great to here that the Kalamata Waterfront Battle tour has recommenced, with the tour taking place in early evening on 27 April, the day before the battle itself took place in 1941.

Titled Kalamata like Dunkirk, the tour was put together by local researcher and former journalist Ilias Bitsanis, assisted by Vassilis Bakopoulos, and organized by the youth education organization KANE with the support of the Centre for Environmental Education. The tour commenced on the Kalamata Waterfront, opposite the Haikos Hotel and proceeded along the Waterfront, pointing to the places of significance to the Greek campaign and the battle, converging on the site of the battle of Kalamata Waterfront itself. The tour then continued to the nearby Greek Campaign Memorial (erected in 1994 by veterans of the campaign) at the Kalamata Railway Park, where a wreath was laid in honour of the fallen of the battle.

George Argyroeliopoulos from the Centre for Environmental Education commenced the tour with a talk on the German invasion of Greece and the role of Kalamata’s 9th Infantry Regiment in the Campaign. This was followed by the formal tour itself, led by Ilias Bitsanis, walking the tour participants to the various sites connected to the battle and telling the story at each stop. Mr Bitsanis is a researcher and former journalist with Kalamata’s leading newspaper, Eleftheria. Approximately 50 people took part in the tour. 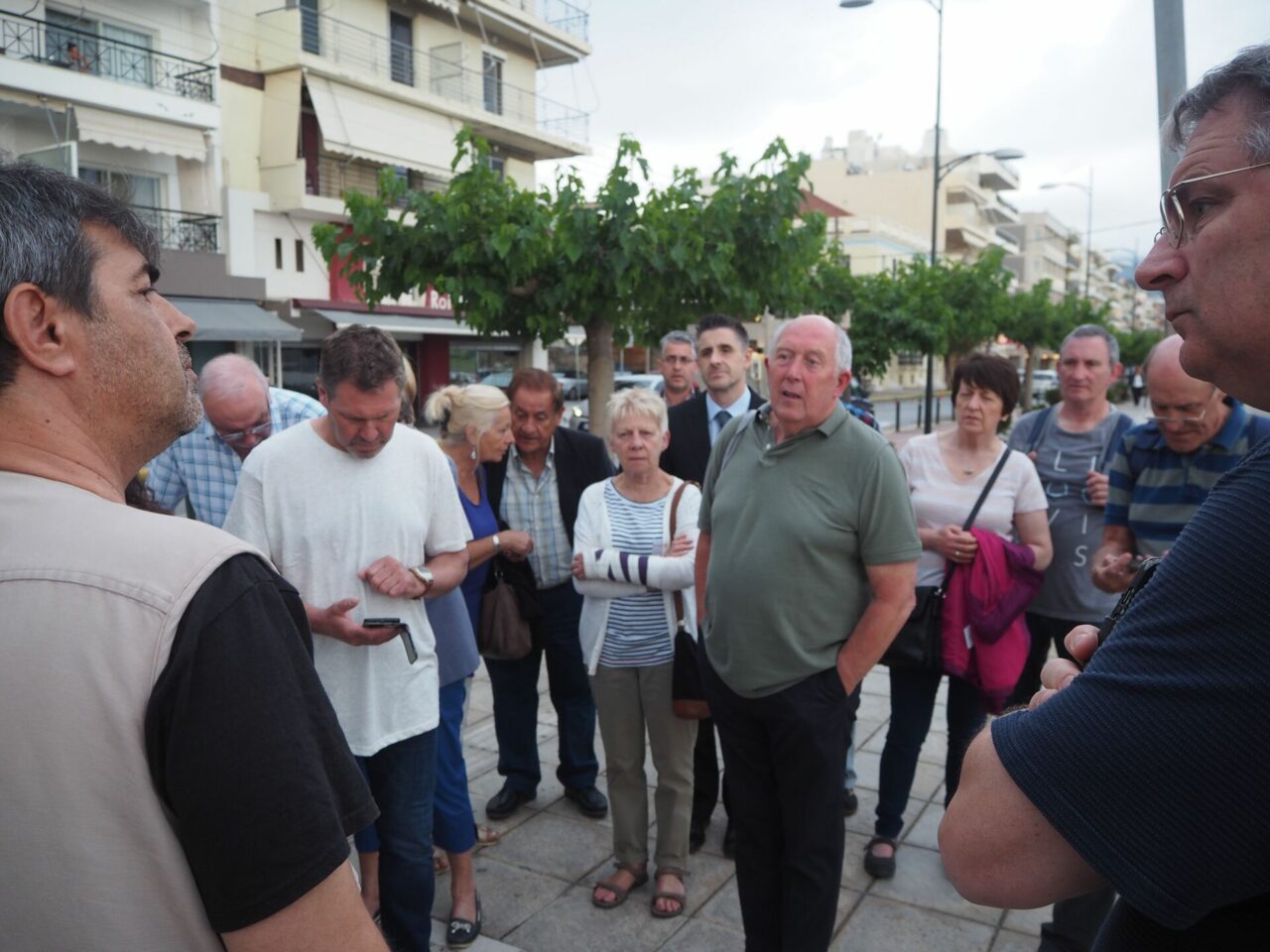 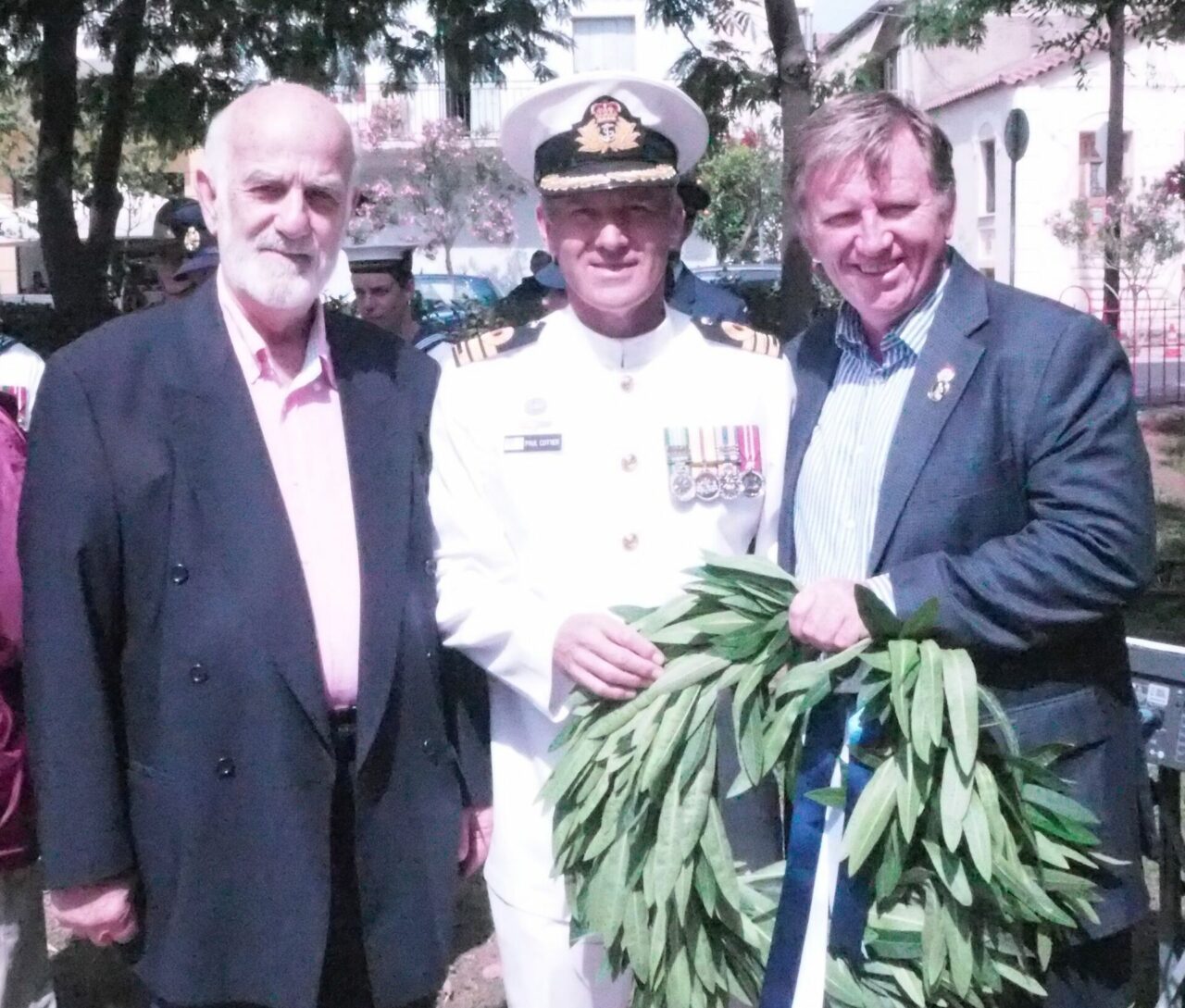 The author (at right), with the Australian military attaché and Mr Rico Soublis of Melbourne’s Pammessinian Brotherhood Papaflessas at the May 2016 Kalamata commemorative service. Photo: Jim Claven

For Mr Bitsanis the conduct of the tour is not merely a tourist event but a deeply commemorative one. As he say, it is “an important element of newer history”, creating a “bridge” which can connect with the past through the personal and emotional memories of the events. He strongly believes that the tour is not merely about those who sadly gave their lives – both soldiers and civilians -but also commemorates those who survived, whether as escapers or as prisoners of war. Through the tour both Kalamatans and the descendents of those who served there can here the stories of their people and the connections created during the terrible days of war.

Kalamata’s role in the Greek campaign, the evacuation and the battle have received more attention in recent years, thanks to the works of dedicated volunteers and authors. We are all indebted to the work of the late local historian Nikos Servis who published his book – Kalamata: Occupation, Resistance, Liberation – The First German Occupation, The Italian Occupation – many years ago and which has thankfully been translated into English with the help of the UK-based The Brotherhood of Veterans of the Greek Campaign 1940-41. This has now been added to by a publication by Mr Bitsanis – Kalamata like Dunkirk. The publication is only available in the Greek language, however we are hopefully that it may be translated into English at some stage.

I have also researched the Kalamata story, publishing articles on the part played by Captain Albert Gray in the battle of the waterfront and of Australian escapers from Kalamata – Syd Grant, Robert Vial and George Foot. Kalamata’s part in the Greek Campaign will also feature in my soon to be released publication, Grecian Adventure – Anzac Stories and Photographs Greece 1941, published by Melbourne’s Pammessinian Brotherhood Papaflessas with the support of the Victorian Government, various community organizations and individuals.

A few years ago the significance of the battle of Kalamata Waterfront compelled me to research the battle in detail, walking the ground and accessing the various archives and accounts of the battle. It was from this research that I wrote and organized the creation of the Battle of Kalamata Waterfront Memorial plaque, to honour of those who fought there, those who died and those locals who helped the Allied soldiers who served there. With the support of the Pammessinian Brotherhood Papaflessas, the local authorities and the assistance of Christina Despoteris, this was brought to fruition and will hopefully soon be installed at Kalamata Waterfront.

I am sure all readers will join me in congratulating the organizers and authors. The tour organizers deserve to be congratulated on their efforts. As someone who has been involved in researching and organizing commemorative events over many years both in Greece and Australia, I know the hard and dedicated work that these volunteers would have had to put in to achieve the success they have. Through their efforts the battle of Kalamata Watefront – and the wider story of the Greek Campaign and Kalamata – with the involvement of Australian as well as New Zealand, British, Greek, Palestinian, Cypriot, Yugoslav and other Allied forces – will be remembered and better understood in the city where these events took place. What greater honour to the Allied soldiers who served and who died there as well as those locals who bravely helped them.

I wish the tour organizers well for this great initiative and hope that it will continue into the future. I hope that the local authorities – both the Municipality and the Regional Government – will support this important creation into the future. I encourage all who visit Kalamata during April and May to seek out the Kalamata Like Dunkirk tour. You won’t regret it.

Jim Claven is a historian, freelance writer and published author, having written Lemnos & Gallopoli Revealed and the soon to be released Grecian Adventure, along with many other historical articles and presentations on the Hellenic link to Anzac. He thanks Panagiotis Andrinopoulos and ilias Bitsanis for their assistance in the preparation of this article. Those readers interested in obtaining a copy of either Nikos Servas’ or ilias Boutsanis’ books should contact Jim Claven. He can be contacted at jimclaven@yahoo.com.au.