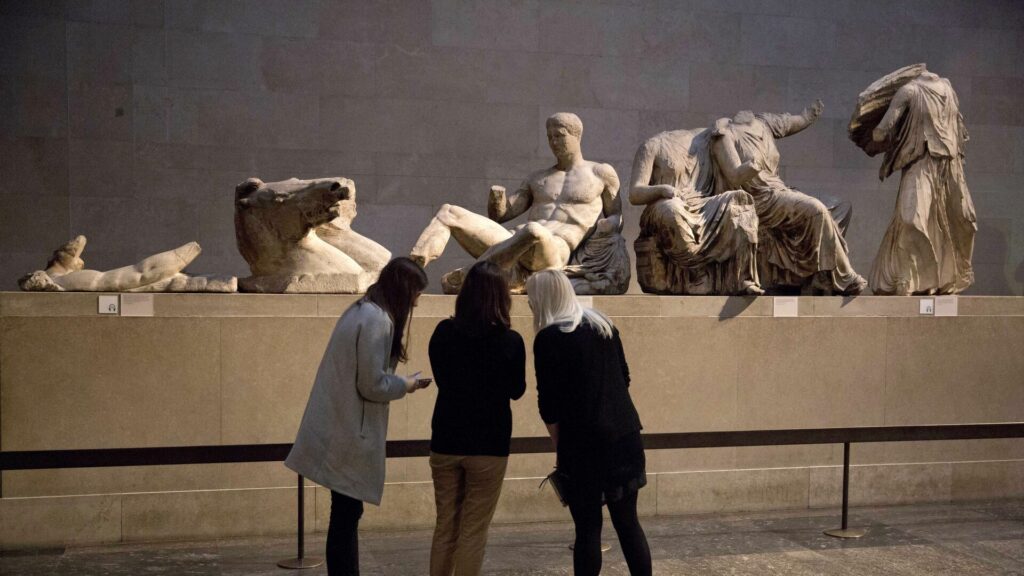 A marble statue of a naked youth thought to represent Greek god Dionysos, centre, from the east pediment of the Parthenon, on display at the British Museum in London. Photo: AAP via AP/Matt Dunham

Formal talks are being planned between Greece and the United Kingdom, regarding the potential repatriation of the Parthenon Sculptures from the British Museum, where they have been since 1816 to their place of “birth”.

UNESCO announced the landmark agreement ahead of International Museum Day, on May 17, following the proposal made to Greece by the UK’s minister for arts, Stephen Parkinson on April 29. The dates are not yet set for the upcoming meetings.

Formerly known as the “Elgin Marbles”, the contested sculptures were taken from the Acropolis in 1801 by Lord Elgin, and deposited to the London institution, while Greece was under Ottoman occupation.

The series of sculptures were created between 447 BCE and 432 BCE and include marble relief panels, figures, and friezes depicting a festival procession celebrating the Greek goddess Athena.

However, with a growing number of European and North American institutions repatriating objects taken during periods of colonisation from their countries of origin, this stance has changed.

At the forefront of the repatriations wave are The Benin Bronzes, a group of objects taken by British troops from the Kingdom of Benin 1897.

In September last year, a UNESCO advisory board requested the U.K. to “reconsider its stand and proceed to a bona fide dialogue with Greece.”

In response, the British Parliament had stated that because the museum operates independently of the British government, it is not up to the government to decide on the fate of the Parthenon Sculptures, which is in the Museum’s collections.

Following UNESCO’s suggestion, Greece’s culture minister, Lina Mendoni, said in a statement, that the issue “is of an intergovernmental nature—in contrast to claims from the British side that it is a matter for the British Museum—and mainly that Greece has a valid and legal claim to demand the return of the sculptures to their place of birth.”

The landmark talks will take place between England and Greece’s respective ministers of culture.